The US Marine Corps (USMC) has declared initial operational capability (IOC) for its fleet of Lockheed Martin F-35C carrier variants.

The declaration was made by the Marine Fighter Attack Squadron 314, based at MCAS Miramar in California, the service said on 2 December. 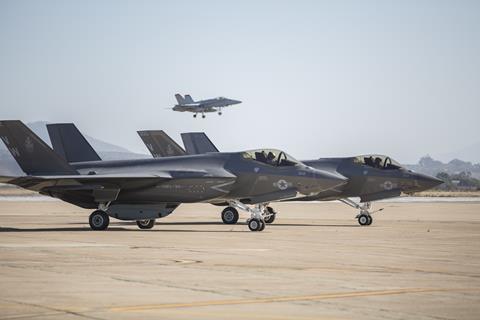 The carrier variant of the F-35 can land on the USN’s nuclear-powered aircraft carriers – the Nimitz and Gerald R Ford classes. The USMC also is buying the F-35B short take-off and vertical landing variant, which can launch from and land on both large carrires and smaller amphibious assault ships.

“The F-35 is an expeditionary platform that extends the reach of our Marines and machines, and increases our ability to support joint and allied partners at a moment’s notice,” says Major General Christopher Mahoney, commanding general of the Third Marine Aircraft Wing. “By effectively employing the F-35, [Marine Air-Ground Task Force] commanders have the potential to dominate our adversaries in a joint battlespace, in the air and out at sea.”

Though they cannot land on the short decks of amphibious assault ships, F-35Cs are more capable than the F-35B in range and payload. Those abilities are seen as vital for countering the Chinese military across the vast distances of the Western Pacific.

“The F-35C provides critical flexibility and persistence operating from conventional aircraft carriers or land bases,” the service says in its 2019 Aviation Plan.