The US Marine Corps used the Lockheed Martin F-35B to launch an air strike in Afghanistan on 27 September, the first ground attack by the stealth fighter.

The F-35B Lightning took off from the USS Essex, a Wasp-class amphibious assault ship, in the Arabian Sea and launched an attack on a reportedly fixed Taliban target using an undisclosed weapon. Citing operational security concerns, the US Navy declines to give additional details on the mission, though a video posted by the service indicates that a precision-guided bomb was used. 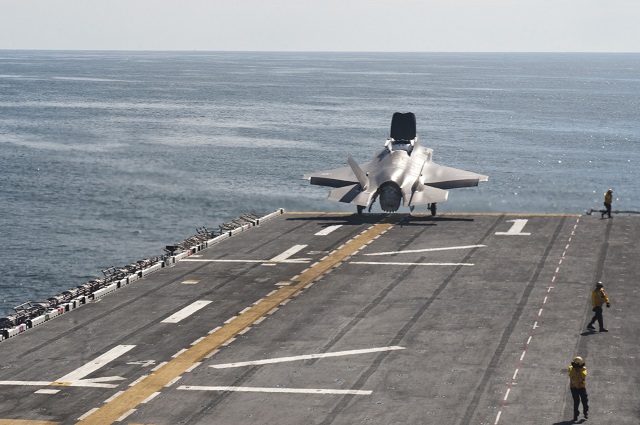 The F-35B’s combat debut comes more than three years after the USMC declared the aircraft to have initial operational capability. The Israeli Air Force was the first to use the aircraft in combat, declaring in March that its F-35I Adirs participated in two air strikes in the Middle East this year.

The USMC says its air strike in Afghanistan was in support of a ground clearance operation and was deemed successful by the ground force commander. The F-35B, the short takeoff and vertical landing variant of the joint strike fighter, later landed vertically back on the deck of the USS Essex after its mission.

“The F-35B is a significant enhancement in theater amphibious and air warfighting capability, operational flexibility, and tactical supremacy,” said Vice Adm Scott Stearney, commander of US Naval Forces Central Command. “As part of the Essex Amphibious Ready Group, this platform supports operations on the ground from international waters, all while enabling maritime superiority that enhances stability and security.”

The 13th Marine Expeditionary Unit is the first combat-deployed unit of its kind to replace the AV-8B Harrier with the F-35B Lightning II.