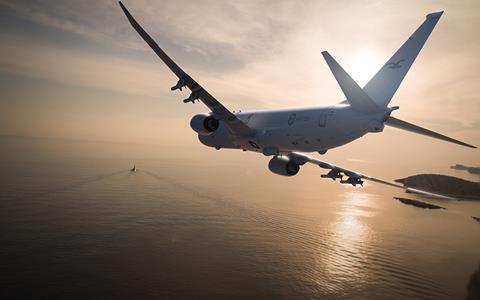 “The P-8A continues to be an invaluable asset and these additional aircraft will help deliver expanded maritime patrol and reconnaissance capabilities to the fleet,” says Captain Eric Gardner, programme manager for the USN’s Maritime Patrol and Reconnaissance programme office.

P-8As are land-based anti-submarine and anti-surface ship jets designed for intelligence, surveillance and reconnaissance missions. They carry sensors including synthetic aperture radar and electro-optical and infrared camera. P-8s have a 1,200nm (2,200km) flight radius including 4h on station, and inflight refuelling capability.

The aircraft, based on the Boeing 737NG commercial airliner, has a bomb bay and weapons pylons on its wings to carry Boeing AGM-84 Harpoon anti-ship missiles and Mark 54 lightweight torpedoes. It has capacity to carry 129 A-size sonobuoys.

In March, the US Department of State approved a possible Foreign Military Sales deal for five P-8As to Germany for an estimated cost of $1.77 billion. That contact has yet to be finalised.