The US Embassy in Greece has welcomed Athens’ interest in buying the Lockheed Martin F-35 stealth fighter.

The endorsement comes as tensions between NATO allies Greece and Turkey grow over a variety of issues, including conflicting claims over exclusive economic zones in the Eastern Mediterranean. 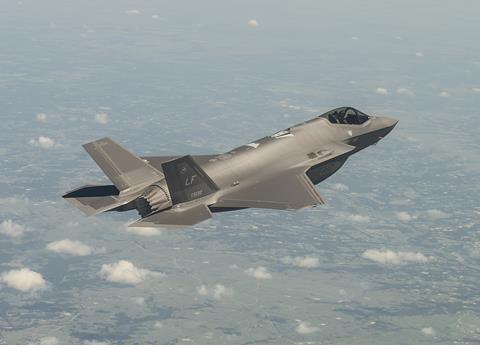 “The United States, at the highest levels, has welcomed Greece’s interest in acquiring the F-35 for the Hellenic Air Force,” says US Ambassador to Greece, Geoffrey Pyatt on 30 November. “We have signaled our support for procurement and are working closely together on a future acquisition programme, which would enhance Greece’s defence capabilities, ensure interoperability with US Armed Forces and improve regional stability.”

The statement rebuffs speculation that the USA might not be willing to supply the stealth fighter to Greece. “All reports to the contrary are false and misrepresentations of US policy,” says Pyatt.

Greece’s Proto Thema newspaper first reported last month Athen’s interest in buying 18 to 24 F-35s. The country is in a rush to buy the combat aircraft and is willing to buy “new or used”, according to the report, which claims to be based on a letter sent from the Greek Ministry of National Defence to the US government.

“The decision to enter (Greece) in the programme of the F-35 Joint Strike Fighter will be based on a variety of factors, such as the delivery programme of the fighters, the repayment plan, the configuration of the aircraft and a possible combination to obtain a total of 18-24 jets (new or used by the US Air Force, if available)”, the letter reportedly says. “Your immediate response will be appreciated… Due to internal fiscal arrangements and other applicable rules within the EU budget and deficit framework, it is crucial that the first F-35s are delivered in 2021. For our part, we will do everything possible to implement this ambitious programme.”

Plans to acquire the F-35 come after Greece announced plans in September to obtain 18 Dassault Rafale fighters and upgrade 10 of its Mirage 2000s into the “-5” standard.

The bulk of the Greek air force is made of 114 examples of the Lockheed Martin F-16C. The country has signed a deal with Lockheed Martin to upgrade 84 of those jets into the F-16V variant.

“The path to acquisition of the F-35 is a multi-year process that would naturally build upon the successes realized in Greece’s F-16 Viper upgrade programme,” says Pyatt. “The US-Greece defence relationship is at an all-time high and is one of America’s strongest military relationships in Europe. We take great pride in our defense and security partnership with Greece and work daily to advance that from strength to strength, including through Greece’s future acquisition of the F-35.”

Greek acquisition of the F-35 is sure to irritate neighbouring Turkey which was kicked out of the F-35 programme in 2019 after acquiring Russian-built S-400, a surface-to-air missile battery that Moscow claims has anti-stealth aircraft capabilities.