The US Air Force’s acquisition costs are projected to reach $104 billion by 2033, driven primarily by the purchase of several new aircraft and weapons.

The US Congress appropriated $84 billion for USAF acquisitions in 2019, meaning spending is projected to increase by 28.3% by 2033. The increase is primarily due to the acquisition of several new aircraft and weapon systems, including the Lockheed Martin F-35 stealth fighter, the Northrop Grumman B-21 stealth bomber, Boeing T-X trainer, the Long Range Standoff Weapon nuclear cruise missile and the Ground-Based Strategic Deterrent ballistic missile. 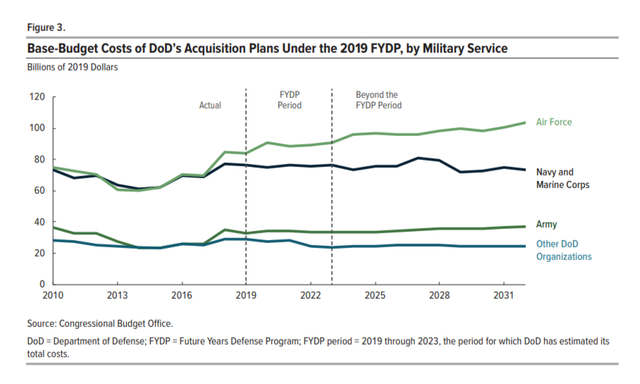 Projected US Air Force spending on acquisition programmes through 2033

Nearly a third of spending in 2033 – some $31 billion per year – would be dedicated to classified activities funded by the USAF through its budget, but not carried out by the service, the CBO says.

USAF spending in 2033 would account for about 43% of all Defense Department acquisition costs, which is projected to total $240 billion.

In the near term, USAF acquisition costs would increase from $84 billion in 2019 to $91 billion in 2023. Again, classified programmes would account for about a third of spending.