As fallout from the coronavirus pandemic further pinches Boeing’s cash flow – financials already hurt by the grounding of the 737 Max – the US Air Force (USAF) has decided to release $882 million in payments withheld from the company in order to help fix a troublesome problem with the Boeing KC-46A refuelling camera boom.

The KC-46A Pegasus in-flight refuelling tanker has been plagued with problems and is years behind schedule. The USAF has withheld full payment on delivered aircraft to spur Boeing to fix those issues. 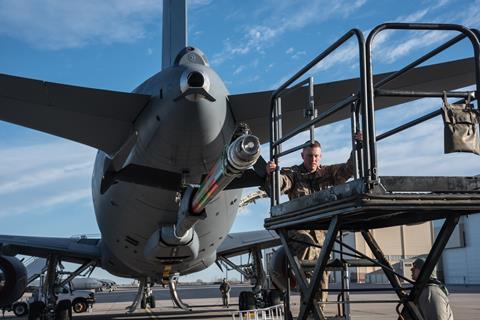 However, in order to ensure a fix to an especially difficult problem with the tanker’s Remote Vision System (RVS) – a camera used to guide the tanker’s refuelling boom – the service believes it would be productive to release the withheld funds. The additional cash should help improve Boeing’s financial position and thus speed up the resolution of the problem.

“Cash flow is everything right now. Liquidity is everything. We have created policies in the Department of the Air Force to get as much cash out of our hands and into industry as possible where prudent. The KC-46 is no exception,” says Will Roper, assistant secretary of the USAF for acquisition, technology and logistics on 2 April. “As we’ve changed cash flow policies, we took a hard look at our withholds for KC-46. Given the need to get an RVS 2.0 design nailed down, we asked ourselves, given Covid-19, is this withhold doing the job for us that we need it to do? We thought it was much better to go ahead and try to tie this up.”

The result is two memoranda of understanding with Boeing. One agreement is to the specifications and process to certify the RVS. The other agreement is for releasing the withheld funds.

The new camera design is jointly developed by the USAF and Boeing . The service plans to initially field the new RVS in 2023.

The USAF has withheld 20% of payments on the 33 examples of the KC-46A that Boeing has delivered to the service because those aircraft do not meet the agreed upon specifications. The programme has three category one deficiencies and a number of other smaller problems.

Category one deficiencies include image warping by the RVS which makes it difficult to steer the refuelling boom; problems correctly connecting the refuelling boom to lighter aircraft, such as the Fairchild Republic A-10 Thunderbolt; and fuel leaks at improperly installed valve points.

Category one deficiencies are problems “which may cause death or severe injury; may cause loss or major damage to a weapon system; critically restricts the combat readiness capabilities of the using organisation; or results in a production line stoppage”, the USAF has said.

The boom camera problem is Boeing’s fault and is being fixed at its expense, despite the release of payments, says Roper.

The boom connection problem stems from unclear USAF design guidance. It is being fixed via a government-funded solution.

The fuel leak problem, which was upgraded to a category one deficiency in March, isn’t dangerous, but is creating a lot of extra work for USAF maintenance staff in the field, says Roper.

“The fuel system is a production quality deficiency,” he says. “The issue is one of just simply installing these U-valves in the fuel system on the KC-46 properly. The fuel system is meant to flex and move as the aircraft moves. There are lots of these flexible valves that if they’re not installed properly fuel will slowly leak out of them.”

Roper criticised Boeing in 2019 for “cultural issues” within the company after KC-46A aircraft were delivered with foreign object debris (FOD), such as trash and loose tools, inside the airframe.

“We’ve gone through a lot of issues at the Everett facility with FOD and other things,” he says. “Boeing is really committed to trying to up their quality and workmanship.”

Roper says he is confident that Boeing can address the issue and is taking it seriously.

As part of one memorandum of understanding, the USAF has also committed to quickly review over the next 120 days the 159 outstanding non-compliances on the KC-46A that Boeing says it has already addressed.

The release of funds to Boeing does not mean the USAF will not withhold funds if issues are not resolved or more issues are found in the future, says Roper.

“We will restart withholds as needed,” he says.

However, Roper underscores that the release of funds comes during extraordinary times where the economy, including defence businesses, are coming under enormous strain because of the coronavirus pandemic. The USAF doesn’t want military readiness or modernisation priorities to fall away.

“Until we get back to normal operations, the government is going to have to operate this way,” he says. “We are in a wartime position right now under Air Force acquisition.”

The new boom camera, dubbed RVS 2.0, will not only fix the image distortion issues that made it difficult for operators to see and created risks of collision with recipient aircraft, it will also lay the ground work for the KC-46A to autonomously refuel aircraft in the future.

“It’s a complete transformative redesign of the RVS system,” says Roper. “Nearly every facet will be changed.”

Lidar will give boom operators another way to judge how close the end of the refuelling boom is from incoming recipient aircraft.

“If you think about your backup assist on your car, we’ll have something very similar to that for the boom operators,” says Roper. “So, telling them, are they left or right, and how close are they getting to the airplane… We think that will help significantly with them understanding their distance to go because lidar is extremely accurate.”

High-resolution cameras and lidar not only solve the KC-46As problems, but set up the tanker for new capabilities, he says.

“A proper RVS like that is right on the doorsteps of autonomy. All you have to do is take that data that tells the world inside the jet the reality of geometries between the airplane and the boom outside the jet. Once you have that, you just simply need to translate it into algorithms that allow the tanker to tank itself,” says Roper. “We’ve committed to work with Boeing on scope of work beyond this current RVS 2.0 to put in that autonomy.”

The extent any future KC-46A would rely on autonomy for connecting to recipient aircraft would ultimately be decided through additional testing. Roper says safety may dictate that the system is only semi-autonomous, requiring a human operator to be involved.

“I think we’re turning a corner and starting a new chapter on KC-46,” says Roper.

He credits recent progress on the KC-46A programme to Boeing’s appointment in January of Dave Calhoun as chief executive after the dismissal of former CEO Dennis Muilenburg in December in the wake of the 737 Max crisis.

“I definitely think that Mr. Calhoun has brought in a very different tone for Boeing,” he says. “I feel like teams are more empowered at the edge [of the company].”

Ultimately, Roper says the USAF wants to change its working relationship with Boeing and put the KC-46A’s problems behind it. He notes that should the USA go to war it would be forced to use the KC-46A, problems fixed or not.

“This programme has a lot of baggage. It’s a cautionary tale for many bad practices in acquisition,” he says. “Often discussions on KC-46 start by going backwards and talking about all the history, but we’ve got to be closers on this programme.”