The US Air Force (USAF) has hit a target with a cruise missile launched from the ramp of a cargo aircraft for the first time as part of its Rapid Dragon programme.

The service deployed a cruise missile with a live warhead from the back of an MC-130J Commando II special operations transport using its Rapid Dragon Palletized Weapon System on 16 December. The test took place at the Eglin AFB Overwater Test Range above the Gulf of Mexico, the Air Force Research Laboratory (AFRL) says. 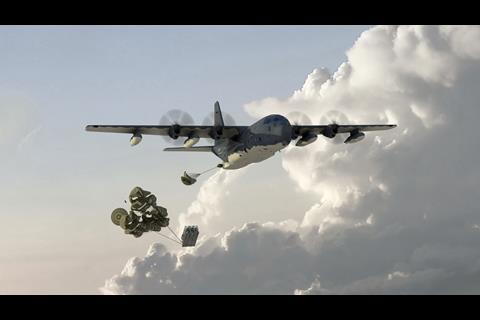 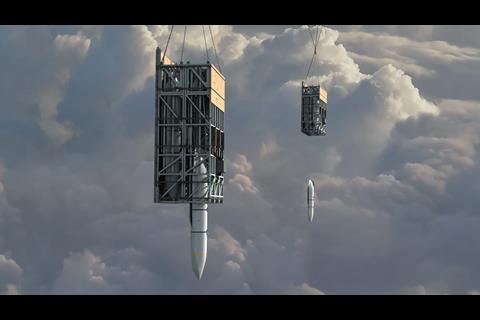 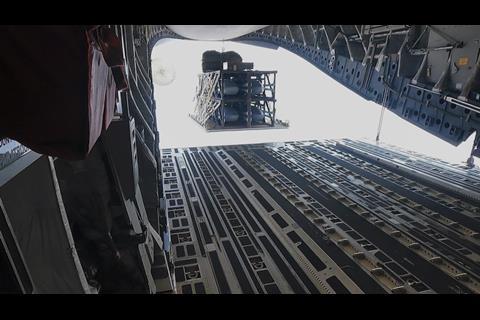 Rapid Dragon is a palletised system, designed to be rolled off an aircraft's cargo ramp

After the Rapid Dragon system, which contains cells for holding multiple cruise missiles, was dropped off the ramp of the MC-130J cargo aircraft it deployed a parachute to slow its descent and then a cruise missile was released from its bottom side.

“Immediately after the vertical release, the [cruise missile] deployed its wings and tail, achieved aerodynamic control, ignited its engine, performed a powered pull-up manoeuvre, and proceeded toward its newly assigned target,” says the AFRL. “The cruise missile successfully destroyed its target upon impact.”

The type of maritime target and the type of cruise missile used in the experiment were not disclosed. Previous Rapid Dragon demonstrations have used the Lockheed AGM-158 Joint Air-to-Surface Standoff Missile-Extended Range (JASSM-ER). Given the maritime target, it is likely that the Long Range Anti-Ship Missile – based on the JASSM-ER – was used.

“The [Rapid Dragon] programme name is derived from a thousand-year-old Chinese military-designed crossbow catapult that launched multiple crossbow bolts with the pull of a single trigger, raining destruction down on armies from tremendous ranges,” says the AFRL. “These lethal devices were called Ji Long Che – Rapid Dragon Carts.”

Constrained by a limited number of bombers, the USAF is looking for new ways to launch its arsenal of cruise missiles – particularly for potential conflicts with China.

That the USAF chose to hit a maritime target as part of its first live-fire test of Rapid Dragon may indicate the service’s interest in using the technology for anti-ship missions. If the USAF were to repel an attempted amphibious invasion of Taiwan by Chinese forces it would need to sink a large number of ships.

The service says the next step for the Rapid Dragon programme will be a live-fire test with a cruise missile from a Boeing C-17 Globemaster III strategic airlifter in the spring of 2022. The USAF also wants to try launching additional weapons and unmanned air vehicles in future tests.

Ultimately, the service says it plans to move Rapid Dragon from a developmental prototype to an operational prototype over the next two years.