In another indication that developing an amphibious Lockheed Martin C-130 is a top priority for the US Air Force Special Operations Command (AFSOC), the service sent Major General Eric Hill to speak with Japanese navy representatives about that country’s ShinMaywa US-2 amphibious aircraft. 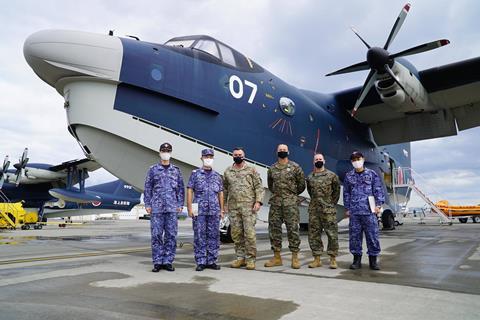 AFSOC plans to design, build and fly an amphibious MC-130J retrofit by around the beginning of 2023. The special operations command wants an amphibious aircraft for operating across the Indian and Pacific Oceans, vast regions where it is facing off against China.

“The Indo-Pacific region has high strategic importance,” Hill said on 15 November. “We’re an incredibly capable air force, and while we still need to be able to land and take-off from land-based airfields, the ability to turn the Pacific Ocean into a runway would increase our options to help secure our nation’s and allies’ security interests.”

The MAC amphibious retrofit would be removable, with two floats for water landings and retractable wheels for landing on a runway. Other variants of the C-130, such as operated by the US Marine Corps and other nations, would be able to use the MAC system with minor modifications, AFSOC has said.

Japan’s US-2 is a flying boat with retractable landing gear. The four-engined aircraft has a range of 2,540nm (4,700km). The Japanese navy operates six examples of the type, with an average age of 11 years old, according to Cirium fleets data.

While the US Navy operated amphibious aircraft during the Second World War, the type fell out of favour during the Cold War as runways were paved on islands across the Pacific Ocean, aircraft range improved and in-flight refuelling was developed. However, as AFSOC considers using amphibious aircraft again to distribute forces – especially in areas the Chinese military would struggle to predict and then target – it is trying to relearn old lessons.

“Flying an airplane that can land on water isn’t a new concept, but few aviators have the experience of amphibious aviation,” Hill says. “Gaining lessons from our partners will help us learn what to anticipate as we begin to build our own tactics and techniques moving forward.”