Update: FlightGlobal is investigating reports that, contrary to USAF statements, the service had indeed previously completed hot-refueling of KC-135s. The USAF has not yet responded to requests for confirmation. FlightGlobal will update this story as information becomes available.

The US Air Force (USAF) says for the first time ever, in September 2020, it conducted an on-the-ground hot refuelling of the Boeing KC-135 Stratotanker at Al Udeid air base in Qatar.

The tanker was part of the 379th Air Expeditionary Wing, assigned to US Central Command. The USAF has been flying KC-135 in-flight refuelling tankers since 1957, but it says the type has never been hot refuelled. 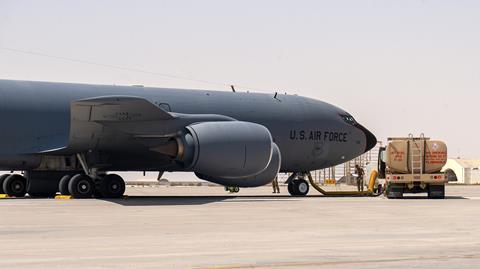 Hot refuelling is a procedure to refill an aircraft with aviation gas while at least one engine is still running. It is intended to reduce the amount of time it takes an aircraft to get back into the air and carry out an additional mission. The hot refuelling practice is already used for a variety of other USAF aircraft as part of the service’s Agile Combat Employment strategy, which aims to spread out landing, refuelling and rearming points for aircraft, and maximize time spent in the air.

After completing validation and verification of procedures at Al Udeid air base, the service is now expanding the procedure to other air bases. On 8 January, it conducted a hot refuelling of a KC-135 at Royal Air Force Mildenhall in the UK.

The new procedure reduces the time needed for refuelling from a four- to six-hour ground operation to roughly one hour, says the USAF.

The USAF intends to increase the survivability of the KC-135 against adversaries by making sure it spends more time in the air and less time on the ground, where it might be a stationary target vulnerable to attack, says Lieutenant Colonel Isaiah Oppelaar, commander of the 379th Air Expeditionary Wing. “Survivability of the KC-135 fleet means we need to keep the aircraft in the air where we can defend it, and to do that we need to increase reliability and speed of tanker regeneration times,” he says.

The idea for hot refuelling the KC-135 came from Captain John Della Pia, a former 351st Air Refueling Squadron pilot and chief of squadron tactics, who wrote up the procedures while attending the Tanker Weapons Instructor Course.

“It takes four hours for maintenance to perform their preflight inspections, ready the jet for refuel, then two hours for aircrew to run their checks and get ready for the next mission,” he says, noting that some inspections and maintenance procedures could be bypassed.

The USAF is operating its fleet of 396 KC-135 tankers long past when it had planned due to delays with the Boeing KC-46A Pegasus programme. Last year, the US Congress blocked the service from retiring any of the Cold War-era tankers until fiscal year 2023 so that the KC-46A programme could play catch up with deliveries and retrofits needed to make the new tanker fully functional.

Correction: Corrected sentence about the basis for the KC-135 being the 707 commercial airliner. In fact, both aircraft are based on the Boeing 367-80 prototype.