What makes the Boeing B-52 Stratofortress so long-lasting?

When Michael Riggs started work on the Boeing B-52 programme almost 20 years ago, the newly-hired engineering graduate expected Boeing would soon move him off the Stratofortress programme. “I thought it was going to be kind of a short stint, because it was an old aircraft. I thought it was an old aircraft because my dad flew it in Vietnam. So I thought, ‘Hey, I'll spend a little time on here and I'm going to need to look for another platform to be working on’,” he says.

Two decades later, Riggs is Boeing’s B-52 programme manager for radar modernisation. “It kind of looks like I'll be able to spend my entire career on the B-52,” he says.

Riggs probably won’t be the last Boeing employee to be outlasted by the Big Ugly Fat Fella (BUFF). The strategic bomber was introduced into service in 1955, and the US Air Force (USAF) now expects it to fly beyond 2050.

Boeing built 744 B-52s in Seattle, Washington and Wichita, Kansas. Production started in 1952 and the last bomber, an “H” model, was delivered in 1962. Today, only the H model remains in the USAF’s inventory, assigned to Air Force Global Strike Command.

In fact, the B-52 will serve longer than the USAF’s two other current bomber aircraft, which were both introduced into service decades after the heavy bomber, and are scheduled for retirement relatively soon. The Rockwell B-1 Lancer was introduced into service in 1986 and the Northrop Grumman B-2 Spirit followed in 1997. Both are to be retired and replaced by the USAF’s next generation bomber, the Northrop Grumman B-21, in the coming decade.

According to Boeing employees who maintain, service and upgrade the USAF’s fleet of 76 B-52Hs there is no single factor that has allowed the BUFF to fly for so long. But two characteristics stand out – its ruggedness and its simplicity. 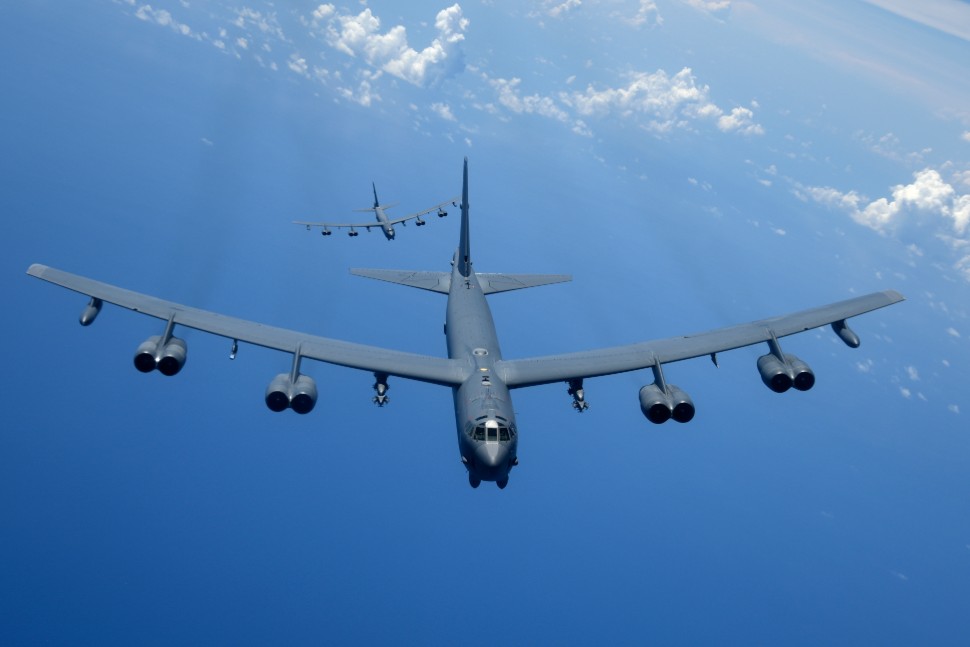 The B-52H gets some of its strength from a structure that is over-engineered compared with modern aircraft, which have been able to save space and become lighter by removing unneeded weight via tighter design tolerances. “The era in which the B-52 was designed we had a far less sophisticated engineering toolset, in terms of the ability to get to the nth percentage point, accuracy on engineering calculations,” says James Kroening, B-52 modernization programme manager. “And so, inherently, there's more design margin in it.”

The aircraft also is simpler and more generic than its modern contemporaries, which were designed for highly specific missions. The B-1 was designed to fly at high speeds at low altitudes below the Soviet Union’s radar coverage, while the B-2 was designed to avoid Soviet detection with stealth technology.

Although the B-52 was initially intended as a high-altitude bomber, its has proved to be more versatile. “There is a simplicity to the overall design of the B-52 to that allows it to take on multiple roles and be re-configurable over time without an overwhelming amount of effort. It can continue to evolve with its missions,” says Kroening. “The B-52, in the minds of some – and it's mostly a reality – is a pretty big truck that is capable of lots of different things.”

The USAF says the B-52 is capable of dropping or launching the widest array of weapons of any aircraft in the USA’s inventory, including gravity bombs, cluster bombs, sea mines, cruise missiles and joint direct attack munitions. With a 31,500kg (70,000lb) payload, those weapons can be arranged inside the aircraft’s spacious bomb bay or across its 56.4m (185ft) wingspan. The B-52H can carry and launch up to 20 cruise missiles.

The aircraft has also dropped non-lethal payloads, including experimental aircraft such as the air-launched rocket-powered North American X-15 – which first flew in 1959 – and the scramjet-powered Boeing X-51 (2010).

The B-52 clearly can’t penetrate defended air space like stealth aircraft such as the B-2 or the Lockheed F-117, but once air superiority has been achieved the bomber has proved to be a workhorse. According to the USAF, during the first Gulf War, B-52s delivered 40% of all weapons dropped by coalition forces.

Still, as a bomber capable of carrying nuclear weapons, the USAF’s B-52Hs have spent much of their working lives flying strategic missions. Historically, the BUFF shas pent only about 250h per year in the air, mostly on non-combat missions, says Kroening. “The B-52H model, which is what remains today, is the set of jets that was doing more nuclear-alert type roles, back when that that role was still active,” he says. “And so they were relatively low flight hours.”

Those lower annual flight hours - about 19,500 lifetime hours on average - have allowed the B-52s to last longer.

In order to operate for 30 more years, the USAF and Boeing have incrementally been upgrading the B-52H with new hardware. Most recently, in July 2019, Boeing announced Raytheon as its selection to design, develop and produce new active electronically scanned array (AESA) radars for the bomber based on its APG-79/APG-82 system.

The new AESA radar should improve the B-52H’s navigation reliability, weather detection and ground mapping, as well as target detection ranges and the number of targets that can be attacked simultaneously, Boeing says.

Next on the to-do list is replacement of the B-52H’s eight Pratt & Whitney TF33-P-3 turbofans. The USAF is aiming to reduce aircraft downtime and maintenance costs, while gaining more electrical power from the new engines. “The air force isn't really looking to necessarily gain anything performance-wise out of new engines,” says Kroening. “New engines are far more fuel efficient, and should cut fuel costs as well as allow for longer mission endurance.”

The B-52H has an unrefuelled range of 7,650nm (14,200km). Depending on the engine selected, that range could be increased by 20% to 40%, says Kroening. GE Aviation, Pratt & Whitney and Rolls Royce are expected to bid for the engine replacement contract; Boeing believes a USAF decision to be at least 15 months away.

The strategic bombers also received Conventional Rotary Launchers in 2016, which gave the aircraft the ability to drop eight joint direct attack munitions or several Joint Air-to-Surface Standoff Missiles from its belly. However, that system was limited to supplying power to only four munitions at a time, which slowed the rate at which bombardiers could drop weapons, possibly forcing the aircraft to make multiple passes over a target. Recently, in February 2019, Boeing started testing an upgraded rotary launcher that is designed to power up more munitions at a time, giving bombardiers the ability to quickly select from a greater variety of smart weapons at short notice.

Boeing and the USAF also believe the B-52H may be able to fly with a smaller crew. The bomber currently operates with five crew members: pilot, co-pilot, navigator, radar navigator and electronic warfare officer.

“A significant cockpit upgrade, beyond what we're doing with the new engine programme and the radar modernisation programme, could potentially enable [the USAF] to scale back to a four-person crew, which could provide cost saving and more efficiency for the Air Force,” says Kroening. “It will be kind of combining the electronic warfare officer duties with [the navigator, radar navigator] duties.” 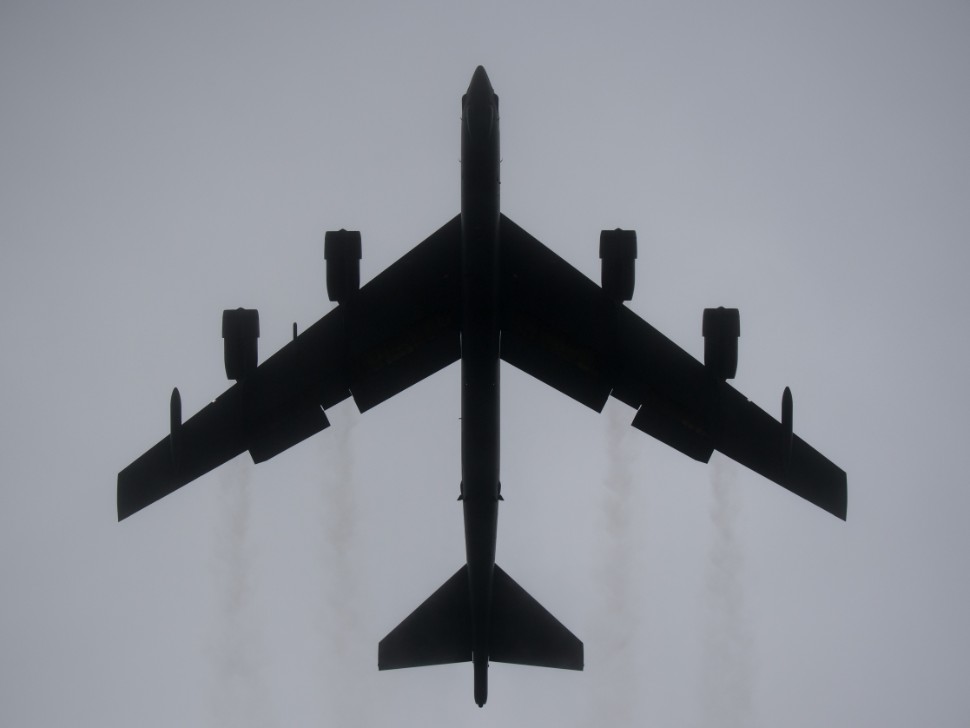