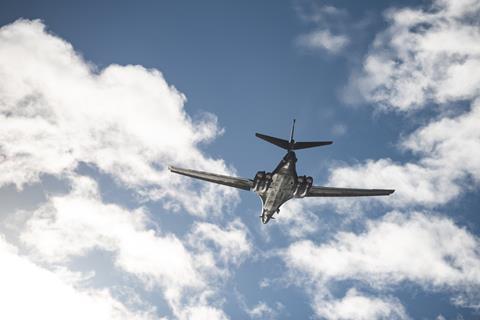 B-1B Lancer takes off from Orland air base in Norway

“We’re just hitting our stride,” he said. “A lot more options are on the table. We’re going to continue to work them.”

Ray declines to say what countries or air bases USAF bombers could land at next. That would require permission from a foreign government and he doesn’t want to put foreign leaders or combat commanders in an awkward position. Still, he says: “We’re looking much more aggressively beyond the current list.”

These new bomber task forces, which typically start from air bases in the continental USA, are a departure from the USAF’s former practice of a continual bomber presence at forward bases, such as Andersen AFB in Guam or RAF Fairford in the UK.

The flights are part of the Department of Defense’s new Dynamic Force Employment strategy. At the heart of that strategy is a paradox: US forces are to be strategically predictable, but operationally unpredictable.

“Predictable in the sense that our adversaries know if they cross a certain line we will respond, and we have the will and capability to do so,” says Mark Gunzinger, director of future aerospace concepts and capabilities assessments at The Mitchell Institute for Aerospace Studies. “Unpredictable in the sense that an adversary will not know exactly how, when, or where we might respond.”

Under the continuous bomber presence model, USAF bomber deployments were well known in advance. That gave US adversaries time and certainty to plan. The Pentagon wants to take away that knowledge.

“The philosophy is that, by creating unpredictability, adversaries are a little less certain about how the US is going to fight, and therefore that gives us an advantage in terms of the decision-making cycle,” says Caitlin Lee, a political scientist and an associate director for the Acquisition and Technology Policy Center at RAND Corporation.

Surprise bomber task forces that land near the border of an adversary reinforces that point.

“It’s an attempt to show we can be present in the theatre at almost any time, and that adversaries can’t necessarily predict that timing,” says Lee. “And so, that may put an element of caution into an adversary’s decision making about what it’s going to do in its backyard.”

Dynamic Force Employment is also intended to dissuade China and Russia from using gray zone tactics, a form of aggression that remains below a threshold where the USA and its allies would likely react. For example, in 2020, the Chinese air force on dozens of occasions flew combat aircraft, such as the Xian H-6 bomber, right up to the median line in the Taiwan strait, a de facto maritime border between Taiwan and China. Such flights wear down the Taiwanese air force, which has to scramble jets to respond. These flights also blur the line between provocation and an actual incoming air strike, a confusing situation which might cause the Taiwanese air force to be slow to react to an actual act of war.

Gray zone tactics are designed to create confusion and take advantage of the black and white definition of war and peace held by the USA, its allies and partners, says Gunzinger. “Americans, we still tend to think of our international systems as either being at peace or at war,” he says. China and Russia see competition with the USA and its allies on a continuum, however, he says.

In theory, the unpredictability of Dynamic Force Employment ought to complicate Russian and Chinese gray zone activities. “If that threshold [for a US response] is uncertain, well, maybe that would force them to pause and say, ‘It’s too high risk, because we don’t know if the US would do this if we do that,’” says Gunzinger.

The unpredictability of Dynamic Force Employment has drawbacks, however. Allies accustomed to the routine presence of US bombers in their region need to be reassured of the US commitment to their defence. The USAF also has to be careful that bomber task forces don’t accidentally escalate tensions. Global Strike Command says it tries to calm tensions with a whole-of-government approach, including “engagement and meticulous planning closely with allies, partners, combatant commands and the diplomatic agencies”.

Dynamic Force Employment fits into the Pentagon’s vision of a Global Operating Model, a change in strategy from long-term regional deployments, for example, stationing forces in the Middle East.

That global model is designed to allow the US military to react to aggression anywhere in the world. The speed by which aircraft can arrive in a region gives the USAF a central role, although the strategy draws upon the US Army, US Navy and US Marine Corps as well.

Should conflict begin to brew, the USAF would have a four-stage response made of a contact layer, a blunt layer, a surge layer and a homeland layer of forces, explained Elbridge Colby, former deputy assistant secretary of defense for strategy and force development, in a 2019 written testimony submitted to US Senate Committee on Armed Services. Colby co-developed the 2018 National Defense Strategy, including the Global Operating Model’s four-layer approach.

The first layer – the contact layer – is a tripwire force positioned near potential conflict zones. It is designed to catch acts of aggression early and prevent China or Russia from dominating the early hours of a conflict. Intelligence, surveillance and reconnaissance aircraft and satellites in the theatre that can discover suspicious activity, as well as stealth aircraft, such as the Lockheed Martin F-22 and F-35, that can survive within contested airspace, are crucial.

The blunt layer is a rapid response force that is focused on “delaying, degrading, and ideally denying the enemy’s attempt to lock in its gains before the United States can effectively respond”, says Colby.

“The central idea is to prevent China or Russia from achieving a fait accompli – it does not require a fixed force,” he says. “Indeed, blunting is likely to be done best by a combination of munitions launched from afar as well as forces deployed and fighting forward.”

Bomber task forces, which would rapidly launch from air bases in the continental USA, is a core part of the blunt layer.

The surge layer is designed to arrive later and play a decisive role “exploiting the operational and political leverage created by the blunt layer to defeat China or Russia’s invasion and induce them to end the conflict on terms we prefer”, says Colby.

Lastly, the homeland layer is designed to deter and defeat attacks on the USA.

Removing bombers from forward air bases to stations within the continental USA improves aircraft, aircrew and support personnel readiness by positioning the force closer to resources, says the USAF.

“We have the highest bomber aircrew readiness in the history of the command. We did that in the middle of Covid,” says Ray. “The reality is, when we left the continuous bomber presence, and began to operate this way, it actually builds our readiness because we’re not stuck in one place without great training resources for a long period of time. The morale of the team is really high. They enjoy doing this.” 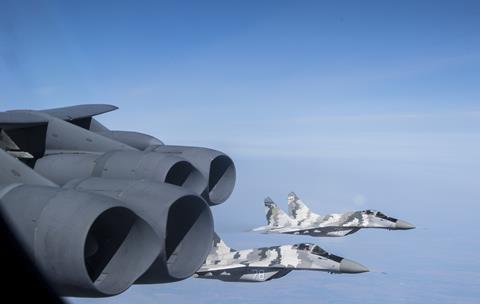 Now, aircraft are cycled not through regions but through levels of readiness to deploy. That information is closely tracked.

“The Secretary of Defense wants to be able to look across the global force pool, and know at any given time whether a unit is ready to go or needs time to build readiness,” says Lee. “Before, the [secretary of defense] might have to grope around a little bit to figure out who’s ready to go at any given time. Now, there’s actually a strategic sort of plan and structure and some visibility and predictability.”

“Several months ago, we put a couple of B-1s on the ramp at Prince Sultan air base [in Saudi Arabia], just very quickly to be on the ramp for a few hours,” says Ray. “That was a very effective statement.”

That October show of force was seemingly intended to send a message to Iran.

Indeed, aircraft may not even have to land in an allied or foreign partner’s territory to make a statement, says Gunzinger. In May, two B-1Bs from Ellsworth AFB in South Dakota flew a bomber task force mission to the Black Sea, just south of the Russian border. The bombers flew alongside Turkish Boeing KC-135s as well as Ukrainian Su-27 and MiG-29 fighters.

US allies and partners play a key role in Dynamic Force Employment. The more locations from which the USAF can generate bomber runs, the more difficult and expensive it becomes for adversaries to prepare defences. For example, the February touchdown of the B-1B at the Aero India show at Yelahanka air base in Bengaluru appears to tell China that it now must watch and defend its western flank, in addition to anticipating bomber runs generated from islands in the Pacific Ocean. 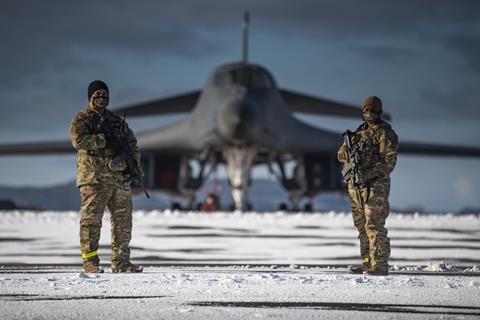 What’s more, bomber task forces that land or pass through other nations’ territory not only keep adversaries guessing, but reassure allies and partners of the USA’s security guarantee. And, the flights give the USAF a chance to practice joint operations with allies and partners.

For example, when a B-1B landed in Powidz, Poland on 12 March it was able to practice hot refuelling, a process during which an aircraft lands and parks but keeps its jet turbines turning and crew in the cockpit. Hot refuelling reduces time on the ground – where parked aircraft are vulnerable to attack – and can be done at remote locations, which makes it harder for adversaries to track.

“Proving the rapid refuelling concept today in Poland alongside some of our closest allies speaks for itself,” said General Jeff Harrigian, commander of USAF Forces in Europe and Africa on 12 March. “Our bombers can get after the mission anytime, anywhere.”

Ultimately, it is not known if Dynamic Force Employment will deter potential Russian or Chinese aggression better than the continuous bomber deployments of old, says Lee. Since the initiative was revealed in the 2018 National Defense Strategy there has not been enough time to practice the strategy and assess the reactions of China and Russia.

“I think the million-dollar question is, does it work?” says Lee. “Does it change how the adversary thinks about US capabilities and intentions?”