The aircraft, built by Kratos Defense & Security, flew from Yuma Proving Ground in Arizona and safely landed in the desert, says AFRL on 24 January. The successful recovery of the UAV follows a third flight in October 2020 when the aircraft was damaged after its air cushion landing system did not deploy correctly during landing. 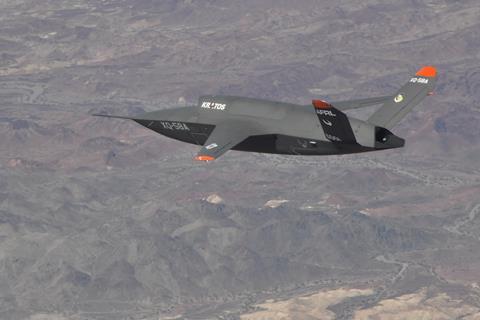 The AFRL says that the XQ-58A met all its test objectives and expanded its flight envelope, including flying at an undisclosed higher altitude as part of an effort to gather data in representative real-world flight conditions.

“Flying at this altitude helped us gather important data such as vehicle response to temperature and vibration, which will prepare us as we move toward our next flight test,” says AFRL XQ-58A programme manager Michael Wipperman. “We were able to show recovery for a successful flight at even higher altitudes. Given that we have overcome these challenges, we have confidence that the aircraft can continue its progression into flying in more representative conditions.”

The AFRL and Kratos Defense did not give specific details of the XQ-58A’s fourth flight and did not immediately respond to a request for more information.

“A total of five flights are planned for the XQ-58A, with objectives that include evaluating system functionality, aerodynamic performance, and launch and recovery systems,” says AFRL. “The fifth flight, scheduled for later this year, will be a capability demonstration showcasing the ability of the vehicle to support operational needs.”

The XQ-58A was developed as part of the AFRL’s Low Cost Attritable Aircraft Technology portfolio.

“The XQ-58A was developed through low cost procurement and is designed to be significantly less expensive to operate than traditional piloted or unpiloted vehicles, while capable of achieving the same critical missions,” says the AFRL.

The UAV is intended to be “attritable”, or cheap enough to be built in large numbers and lost to combat attrition.