How are the all-new Airbus and Boeing widebodies faring?

Amid ongoing speculation about Boeing’s plans for a clean-sheet design to address the much vaunted mid-market segment and the likely response from Airbus, how are the most recent all-new airliners from those stables performing?

Creating a new airliner from scratch these days invariably involves an investment in excess of $10 billion, so the decision to start with a clean slate, rather than via a derivative update, is not to be taken lightly. But it was just such a scenario that Boeing faced in the early 2000s as it evaluated what it did to follow the then established 777.

After toying with its transonic Sonic Cruiser concept in the early 2000s, Boeing launched the 787 in 2004 as an all-new design constructed largely from carbonfibre. The year before, at Le Bourget, its marketing team unveiled the Dreamliner name after a public competition.

Airbus, distracted at that time with bringing the A380 to market, had several false starts trying to create a competitor to the 787. Having sneered at what seemed like an outlandish plan from Boeing to create a Mach 0.98 airliner, suddenly the Dreamliner – a conventional design, if advanced in its systems and structural concept – looked like a threat.

Airbus made several abortive attempts to counter the 787 using the A350 moniker for what was in reality a re-engined A330, before following its rival's lead and launching a clean-sheet design, the carbon A350 XWB.

By the time the XWB emerged in 2006, the two rivals had slightly different objectives. The 787, a successor to the 767, slotted in below the 777 with a mission to banish Airbus's strong-selling original A330 family into obsolescence. Airbus's indecision had cost it a lot of ground to its rival, and the new XWB family was sized in a bid to put the 777 out of business while also giving Toulouse a weapon to compete with the larger 787 variants. Meanwhile, tactical pricing could ensure the A330 disrupted Boeing's 787 efforts.

So this analysis examines the comparative fortunes of the A350 and 787 with respect to their similarities in concept rather than them being direct competitors. 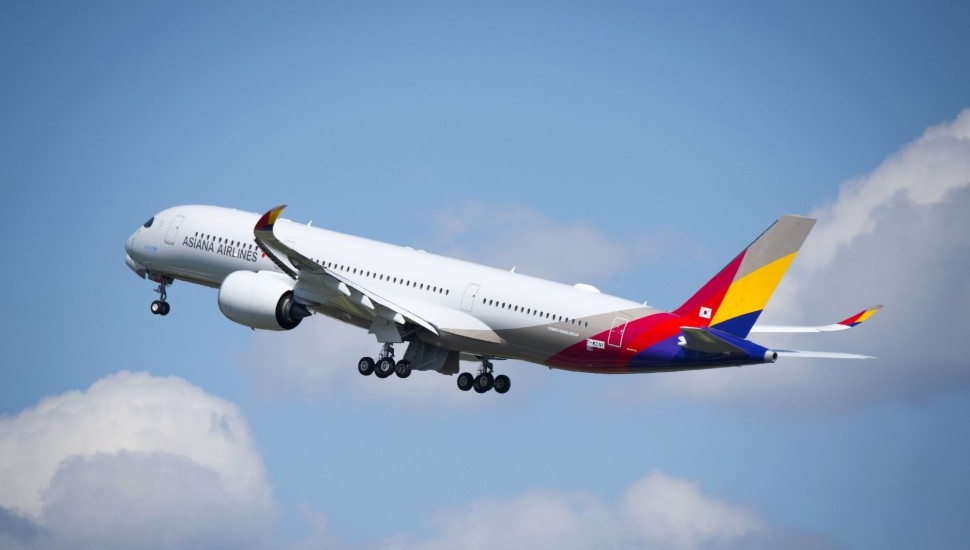 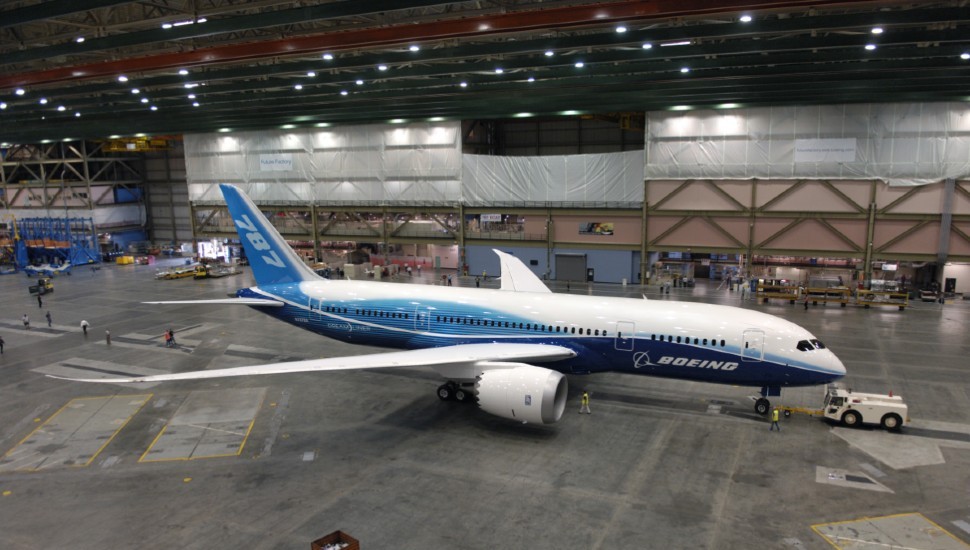 Highlighting the potentially complementary aspect of their designs, Cirium's Fleets Analyzer shows that there are currently seven airlines operating both types with a further 12 due to do likewise, based on current order backlogs.

Both types have had complex evolutions for different reasons but between them now account for 1,100 in-service aircraft and more than 2,300 orders.

Although the XWB launch came some two years after the 787, commitments secured for the earlier "A350" were migrated, providing the new programme with a solid commercial start. Data from Fleets Analyzer shows the two programmes had similar sales success during their early years after launch. By the end of year three from year of launch, net orders for each type were in the 440-480 range – the A350 on 478 and the 787 on 448.

In years four to seven the Dreamliner powered away from its rival, reaching 847 net orders while the A350 struggled to get much beyond 580. The fortunes reversed as a sales flurry for Toulouse took the A350 to more than 800 net orders in year eight while the 787 entered a three-year flatline.

Deliveries of the two types occurred at similar points, the 787 in its eighth year from launch and the XWB in its ninth. Both were later than planned at go-ahead, but the 787 suffered the most severe delay when an already ambitious test timetable went into limbo due to multiple production and development issues. This delay was unprecedented in modern times, with more than four years passing between roll-out of the first 787 in July 2007 and the start of deliveries in September 2011. 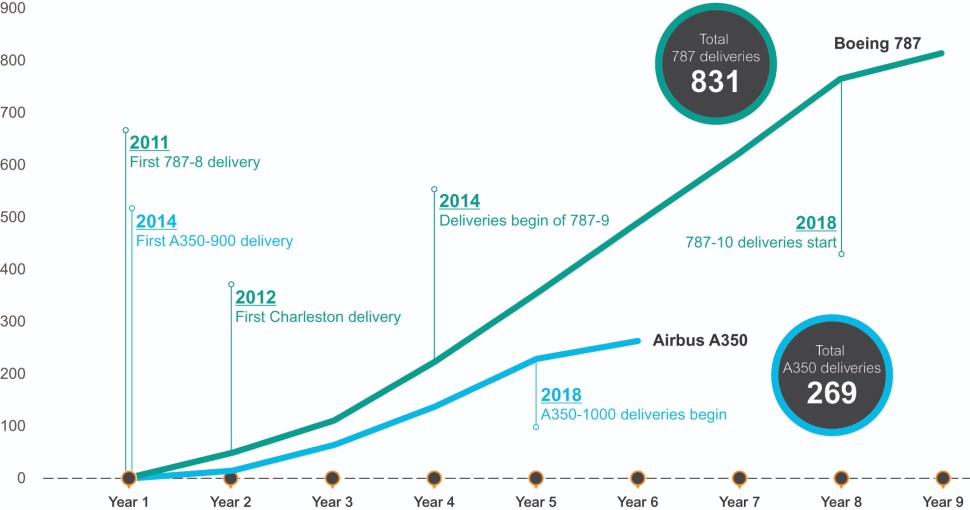 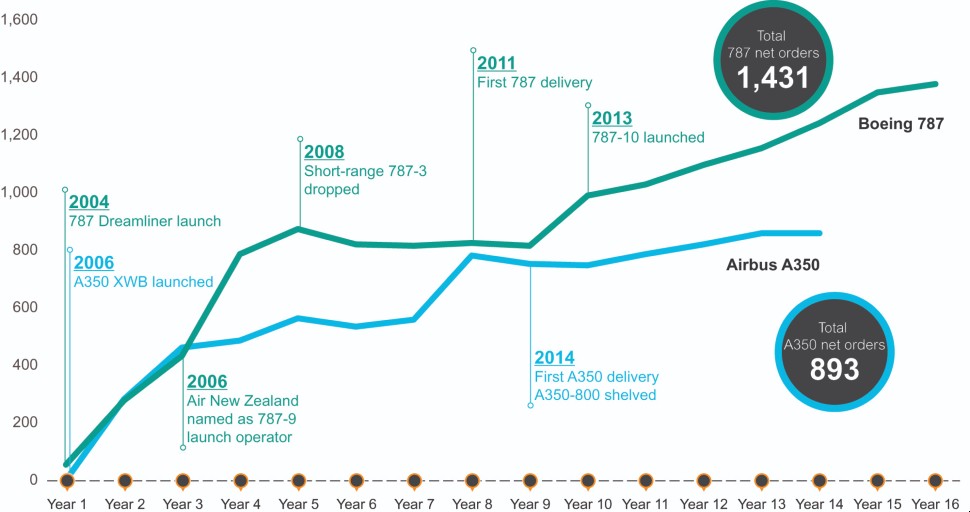 Since net orders for the A350 passed the 800 mark in year eight (2012), incremental growth has been a struggle. This is partly the result of the shelving in 2014 of the smallest family member, the A350-800, with some orders cancelled while others transferred to the larger variants. Airbus had in fact not sold any -800s since 2009, and the decision to launch the A330neo in 2014 provided a viable alternative in Toulouse's product line-up.

From a delivery perspective, the 787 has achieved an impressive production trajectory since reaching its stride. Deliveries of the 787 began from Everett in 2011, while the first A350 was handed over by Airbus in 2014. Overall, the 787 accounts for three-quarters of the 1,100 combined deliveries to date.

Shipment of 787s passed the 100 mark during year three, by which time a second line had come on strength in North Charleston. The 500th 787 was delivered in year seven and now more than 830 have been built, with production across the two assembly plants just completing a rise from 12 to 14 a month.

By comparison, A350 deliveries were into their fourth year by the time the 100-aircraft mark was passed, and production is now stable at 10 a month, with a total of 269 having been delivered by April 2019.

Unsurprisingly, the Asia-Pacific market is the most important for both widebodies. Airlines in the region are the biggest consumer of the A350 and 787, with total orders for the two types standing at 867 (37% of total) and deliveries at 498 (45% of total). The 787 has the larger chunk of this market, with a 60% share.

Europe is the second largest market for the A350 and 787 with just over a fifth of orders and 18% of deliveries. For both types, Europe accounts for just over 20% of each type's order book. In delivery terms, the region contributes 18% of the 787's total and 12% of the A350's. 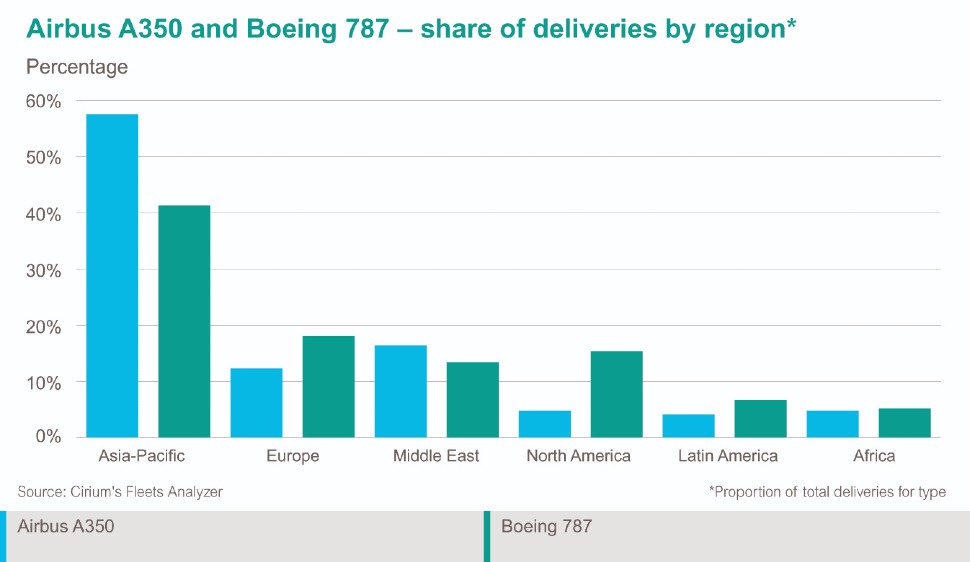 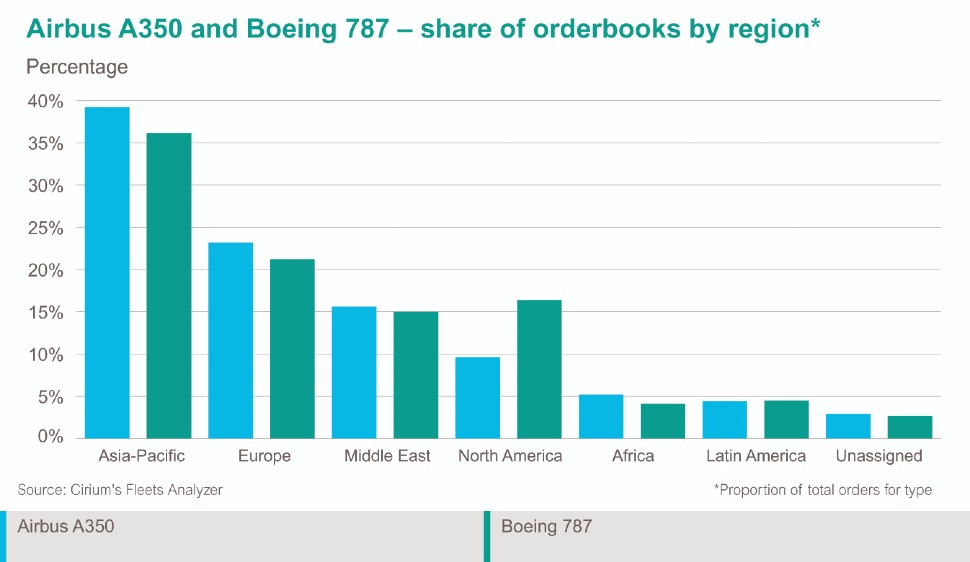 As outlined earlier, the overlap of the Airbus and Boeing widebody product lines involves a mix of all-new and derivative aircraft. With the A380 now removed from Airbus's long-term planning, the A350 is now central to its battle with Boeing in the widebody segment.

Speaking in January after revealing the airframer's 2018 order and delivery numbers, Airbus president Guillaume Faury conceded that "the Boeing team has done a good job on the long-range" sector in order terms over recent years but was resolute about Toulouse's intent to change the dynamic: "We are looking forward to the years to come with our product range – the A350, which is gaining a lot of support from the customer community and a lot of credibility, and the A330neo. I think the future is ours."

If Airbus is to deliver on this intent, a key first step must be to drive the A350 beyond the landmark of 1,000 firm orders. Watch this space. 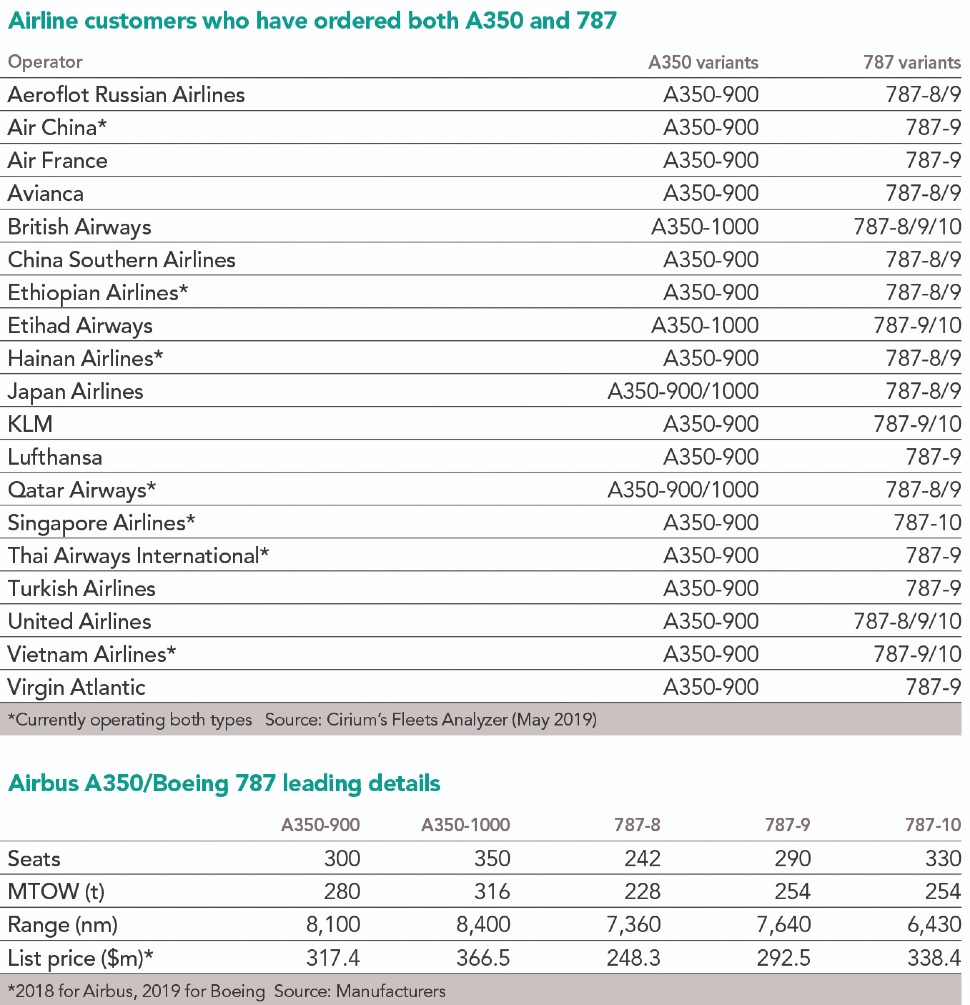