Lion Air founder Rusdi Kirana is furious with Boeing over how it handled the recent 737 Max 8 crash, and says he is determined to cancel the group's massive order for the type, even if it means going to court.

The businessman-turned-politician tells FlightGlobal he wants to cancel every Boeing aircraft the group has on order, and that preparations are under way. While the airline is still taking delivery of a 737-900ER that is on route from Seattle to Jakarta today, talks on future deliveries are ongoing.

"I just don't want to deal with somebody with no respect," he says over the phone from Kuala Lumpur, where he serves as Indonesia's ambassador to Malaysia.

NO IMPACT ON GROWTH

Kirana is unconcerned that cancelling the group's 237 on-order Max jets – comprising 187 Max 8/9s and 50 Max 10s, Flight Fleets Analyzer shows – could impact the group's growth plans. He points to the large number of Airbus A320-family jets the group has on order, adding that he could still order more, or take aircraft from lessors if need be. 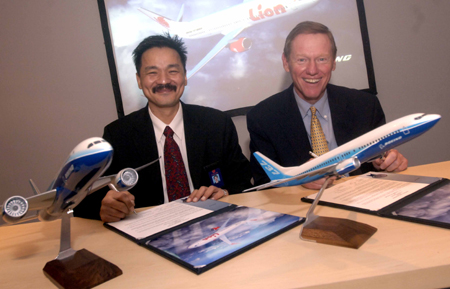 On the suggestion that he is taking the opportunity to pare down on his orderbook, Kirana says: "We have already secured financing for all of our aircraft until the end of 2020. Why would I do that if [I'm cancelling] because of oversupply?"

Kirana is aggrieved that Boeing issued a detailed statement in response to a preliminary report on the 29 October crash released by Indonesia's National Transportation Safety Committee last month. In it, the manufacturer reiterated key points from the interim report but also pointed out the lack of some information, including records of the installation and calibration of an angle-of-attack sensor that had been replaced. Boeing noted also that the aircraft had suffered similar airspeed and altitude issues on flights prior to JT610, even after maintenance, and that pilots had been able to overcome the problems.

Boeing's timing in releasing its detailed statement at almost the same time as the regulator's report is interpreted by Kirana as an attempt to "divert the blame" to him – and away from questions on why pilots were not made aware of a new feature, the Maneuvering Characteristics Augmentation System (MCAS), on the Max.

"From the first day of the accident 'til they put out the release, I never gave any comment, even though the world was already talking about MCAS. I was in a difficult position and still I defended them and said that we respect the investigation. How can they do this? Why then should I respect them?" says Kirana.

He adds that the group will "see about the consequence" of the cancellation, and hints at the possibility of a legal response to Boeing's release of its statement.

When contacted, Boeing says: "Lion Air is a valued customer and we are supporting them through this difficult time. We are deeply saddened by the tragic accident at Lion Air. Our hearts go out to everyone who has been impacted by this, and safety remains our number-one priority. We are taking every measure to fully understand all aspects of this accident, and are working closely with the investigating team and all regulatory authorities involved."

Lion has been a Boeing customer since day one, where it started out with a leased 737-200 in 2000, before making its first direct order with the airframer in 2007. It turned to Airbus only in 2013, with an order for 234 A320-family jets, to help meet its ambitious growth plans. Today, its group of airlines, including units in Malaysia and Thailand, has more than 180 Boeing jets in service.

Kirana highlights Lion's IOSA certification and notes that its its heavy maintenance is approved by the US Federal Aviation Administration and its training centre by the European Aviation Safety Agency. Still, the airline will seek to further raise standards, while investigations into the fatal crash continue.

Meanwhile, the Indonesian market continues to grow, and Kirana's business remains profitable. "The Indonesia market this year is good. Despite the big accident and Boeing's blow to me, I still survive," he says.