The 56-year-old is leading Cathay through a major three-year transformation programme, and he is focused. In the captain's seat for more than a year now, Hogg is pleased with the progress thus far and is convinced that the Hong Kong carrier is on the right path. 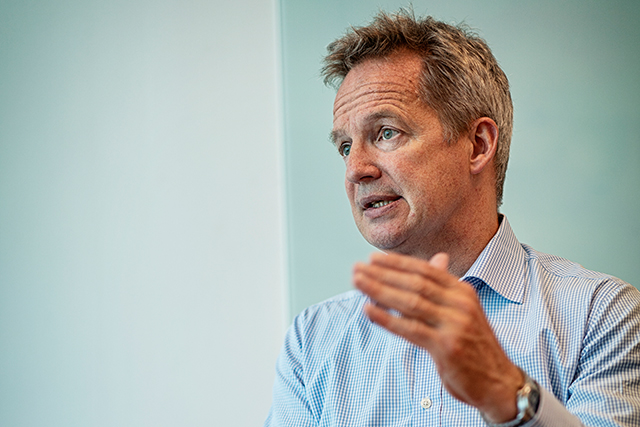 Speaking to FlightGlobal at Cathay's Singapore office, Hogg says it was obvious that the 72-year-old airline had to make bold changes after three consecutive years of negative revenue growth.

"That's not a situation we can allow to continue," he says. "Obviously there are a series of external factors that have drawn us to the conclusion that now is the time to make the big change in our business, and I guess the biggest of those is that there is a lot more competition, a lot better competition, and the competition is growing very fast."

Cathay has been criticised for being slow to respond to the challengers knocking on its door.

In recent years it has been particularly affected by mainland Chinese carriers’ push to launch more direct long-haul services, diminishing Hong Kong's role as a transit hub. The Gulf carriers' aggressive pricing, impressive products and comprehensive networks have also lured customers away. Cathay has meanwhile stubbornly refused to take on the growing number of low-cost carriers in the region, which have been chipping away at its customer base.

All of these factors, coupled with missteps in its fuel hedges, drove the group to an operating loss of HK$1.45 billion ($185 million) in 2017, nearly triple the HK$525 million loss from a year ago. Its net loss ballooned to HK$1.26 billion, its largest in nine years, and also the first back-to-back loss in the airline’s long history.

"The world in which we operate has changed – not just the competitive nature, but the customers' needs and what they want, that's all changed too. So we need to change and transform in order to compete," Hogg concedes.

In 2017, the loss-making airline tapped McKinsey & Co consultants to advise on a transformation programme, taking lessons from regional peers Qantas and Japan Airlines, which have both undergone successful turnarounds.

First on the list was a re-organisation – its first in 20 years – aimed at forging a leaner, simpler structure. This saw it cut around 600 jobs and axe chief executive Ivan Chu, who had been at the helm for only three years. As chief operating officer then, Hogg was already tasked with setting out the agenda for the transformation.

Hogg says the extensive reorganisation was executed nimbly, and that all teams are in place. Accountability is now clear and unnecessary layers have been stripped out to facilitate quick decision-making.

Now a year into the transformation, the Oneworld carrier is working to drive new sources of revenue by launching direct long-haul services to points unserved from Hong Kong. It has started flights to Barcelona, Copenhagen, Brussels, Dublin, Zurich and Madrid, enabled by the delivery of 22 Airbus A350-900s in the past two years.

In June, it will take its first of 20 A350-1000s on order, using the jet to launch its longest non-stop flight from Hong Kong to Washington DC. The 334-seat aircraft will also allow Cathay to serve other points in the USA east coast, and on -900 routes that are ready for an upgauge. 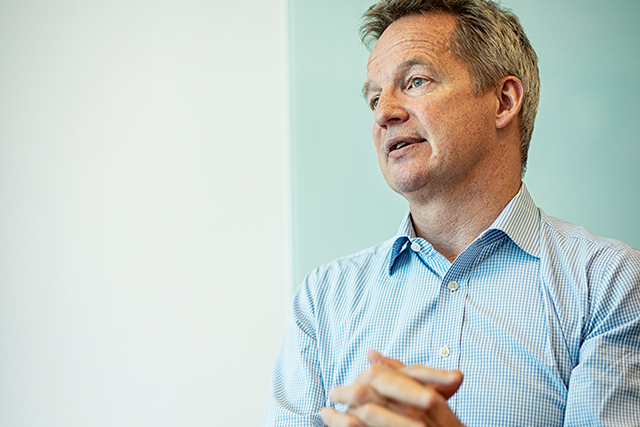 The airline has pledged to take a more "agile approach" to network planning and to be "more experimental and flexible" when it sees opportunities. Helped by the efficiency of new-generation aircraft, this approach saw the launch of more seasonal long-haul services to points such as Cape Town and Barcelona, with the latter since converted to a year-round service.

It also has grand ambitions for Cathay Dragon, which plays a critical role feeding the mainline. The rebranding from Dragonair in 2016 has translated into a clearer group brand proposition and encouraged connectivity. The regional arm has 32 Airbus A321neos on order, which will more than replace its current 23 narrowbodies when they are delivered from 2020. The larger narrowbodies will allow for more capacity to major points such as Beijing, Shanghai and Kunming, and also on popular services to slot-constrained airports such as Tokyo Haneda.

Part of the problem for Cathay in recent years, however, has been mainland carriers' aggressive expansion into direct services between China and North America, Europe and Australia, making transits in Hong Kong increasingly redundant, and hitting a key source of Cathay revenue.

While the Hong Kong carrier saw yields slip across all services last year, the largest drops were to North America (-5%), Southwest Pacific and South Africa (-3.2%), and Southeast Asia (-2.9%).

Hogg, who describes himself as an optimist by nature, believes the rise of the mainland carriers does not spell disaster for Cathay: "When people look at the future of aviation and the competitive environment from Asia, they tend to look at it as a zero sum game – one wins and another must lose. But if you look at the size of the market, it’s on a scale that the world has never seen before."

He points to how people tended to travel once a year on holiday when he first joined Cathay, but that there are now people travelling every weekend from Hong Kong to Taiwan for golf or cycling trips and to South Korea for Kpop concerts. 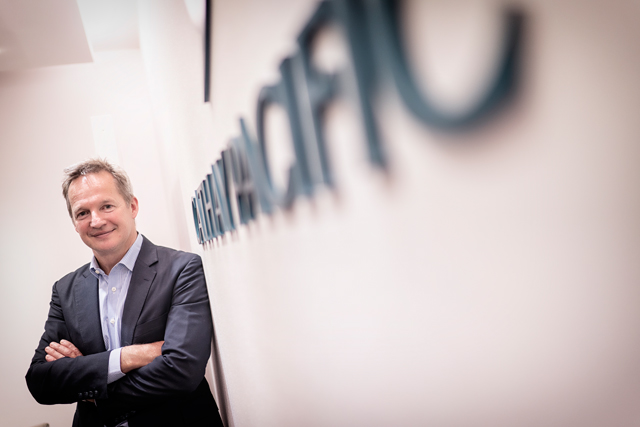 "The market is growing, but what’s happened in the last couple of years is that capacity grew faster than the market. There are some signs that growth rates from Chinese carriers and other carriers are slowing down, but notwithstanding that, customers always have a choice. We have to make sure we are providing what they perceive to be value and an experience that they are prepared to select above their other options – and hopefully pay a premium for it," he says.

"That's why we concentrate first on the network, then on the young fleet as a platform, then we spend a lot of time designing the seats, interior and the cabin ambience. But ultimately, the difference that we try and accentuate is our people."

This is exactly why a focus on the customer is a crucial element for Cathay, especially when the front end of its cabin accounts for 30% of total revenue. Determined to better understand its customers' needs and wants, it has used surveys and data analysis to ensure that it builds a brand that is true of its slogan of "Life well travelled".

"They want more choices, fresh food, a combination of plated and trolley service, a different service style and the ability to interact more with the crew. The final aspect is that they want more control on what they eat and when they eat."

Cathay has gathered the inputs and tailored it into a new service design, to be progressively rolled out on its long-haul flights from the second half of the year. It also scored an easy early win when it introduced hot food on flights to Taipei last October, following customer feedback.

Food aside, it is rolling out wi-fi across its Boeing 777 and Airbus A330 long-haul fleet, with work to be completed within two years. The carrier is also refurbishing the economy-class cabin on its 777s. Besides moving to a 3-4-3 configuration from the current 3-3-3, it is putting in modern seats and providing more leg room, with the inflight entertainment control box now behind the screen. Hogg says going 10-abreast is "industry standard", but the "real emphasis" is on seat comfort and the overall experience.

Understanding customers' needs and desires is necessary to stay relevant in a market where there are an increasing number of options. This is part of the reason for Cathay’s revamp of its Marco Polo Club loyalty programme, making it easier to remain a member and pushing loyal customers to a higher membership status faster.

It does not help that the competition at home has also not stood still. Hong Kong Airlines, launched in 2006, is adding new generation widebodies and expanding into Cathay’s traditional strongholds of North America and Europe. The carrier markets itself as a "new luxury carrier", with fares typically 10-20% lower than Cathay's. Low-cost sister carrier Hong Kong Express has also been on a growth spurt, adding capacity and aircraft, while Cathay sorely lacks a clear low-cost strategy.

"Obviously we have to be price relevant and the market sets the fare… we see people in general doing a wider range of travel and more often. If you really understand the drivers in all of that, you should be able to attract the business and reward people for flying with you, which perhaps we haven’t done as well in the past as we would be able to in the future," counters Hogg.

A digital team has been set up to "slice and dice" data to help Cathay to better understand its customers, bring additional revenues and drive productivity. Data shows that the daily towing of its aircraft at Hong Kong translates into the loss of use of two aircraft daily, for example. The airline has since worked with the airport and made changes to make things more efficient.

Asked what a successful transformation would look like, Hogg points to a return to cost of capital as a minimum, which implies profitability by 2019. This also involves keeping its unit cost without fuel flat – which means thwarting inflation and managing depreciation with the delivery of new aircraft.

"We will be the definition of success when we achieve change, agility and better and better understanding of customers, and I think that will be a continuous process beyond 2020."

Besides the strong cargo demand, another consistent positive contribution to Cathay’s performance has been profitability at its 30% shareholder Air China, in which it also holds an 18.1 % stake. Hogg says both Air China and Swire, which together hold 75% of the airline, are committed to Cathay's transformation.

The soft-spoken chief brushes off long-held speculation that Air China, with which it meets regularly to look at areas of co-operation, could increase its stake in Cathay.

"Both shareholders are very comfortable with their current positions and these positions haven’t really changed," he says.

Asked if he sees any benefits in the mainland flag carrier boosting its stake in Cathay, Hogg would only say that there are no such indications and that its partnership with Air China "works very well at the moment". Both Air China and Cathay have a lot going on in their individual turfs, he adds.

Last year, Cathay also got a surprise new shareholder in the form of Qatar Airways, after the Middle Eastern player paid HK$5.16 billion for a 9.61% stake from conglomerate Kingboard Chemical. Chief executive Akbar Al Baker has pledged that the airline will not interfere in Cathay's business, and Hogg says that without a board seat, Qatar has so far been a passive shareholder.

With the slew of changes over the last year, Hogg admits that the mood at the firm may have been "unsettling", but that staff have been encouraged by the uptrends in the second half of 2017 as their efforts come to fruition.

"Nothing succeeds like success in terms of morale, so we’re very focused. The management team is not just staying to the plan but trying to up the momentum and get more rungs on the board," says Hogg.

"Most [of our people] have great pride working for Cathay, and I want it to be an airline that people in Hong Kong are proud of, not just for what it does for them, but how it punches above its weight on the world stage. I’ve got confidence that we’ve got all the right components and ingredients, the brand and an airline to do just that."