LATAM Airlines Group will expand its freighter capacity by as much as 80% under a plan covering the conversion of up to eight Boeing 767-300ER aircraft.

The Santiago-headquartered airline group says the conversion plan will be implemented over two phases. Under the first phase Boeing will convert four aircraft between 2021 and 2022, while it holds four additional conversion options with Boeing covering the second phase for delivery between 2022 and 2023. 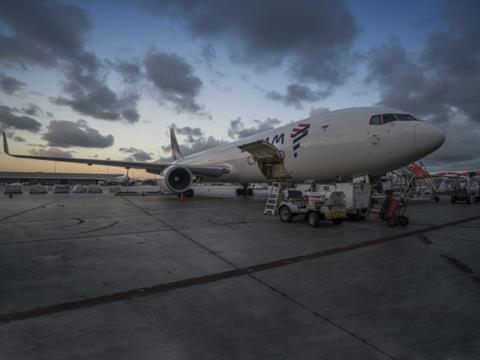 “The addition of these aircraft would consolidate LATAM Group as the leading group of cargo operators in South America,” it says. “It will allow the cargo affiliates to reinforce their operations from North America and Europe into South America, as well as expand operations in the flower markets of Ecuador and Colombia.”

LATAM Airlines Group chief executive Roberto Alvo says: “Despite the deep crisis the industry is enduring due to the pandemic, we maintain our commitment to support the region’s exporters and importers by providing them with more and better options to carry their cargo to their destinations.

“As a result, growth plans have been accelerated with conversion of up to eight Boeing 767-300ERs in the next 30 months.”

“These conversions will enable the cargo affiliates to grow in key segments such the Colombian flower market or imports to Brazil. It also allows our affiliates to expand their network in domestic markets where e-commerce is rapidly generating an increase in air cargo traffic.”

The move comes as airlines explore options on what to do with unused passenger aircraft and expectations of a lengthy recovery in intercontinental passenger flights.

A recent webinar by IBA revealed that since May 2020 almost 200 narrowbody and widebody aircraft have joined the worldwide freighter fleet. This includes more than 40 B767-300ER aircraft.