For the congested US rotorcraft industry, the chance to build the US Army’s next armed scout helicopter is a tantalising prospect.

Within weeks, the service is expected to announce a selection of the two most promising designs on offer. These will then advance to flight-test status, before taking part in a competitive fly-off to be staged by 2023. 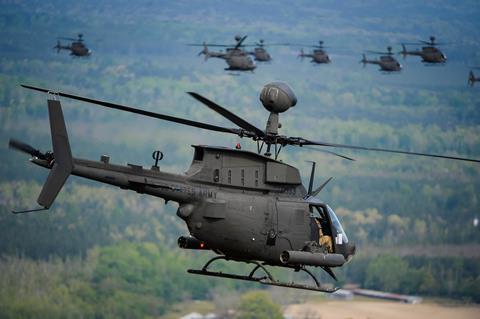 Several innovative designs have previously been unveiled by mainstream rivals Bell and Sikorsky, and also by the Karem Aircraft design house and an AVX Aircraft/L3 Technologies team. By contrast, hard-hitter Boeing has kept its cards close to its chest until gone the 11th hour, as the selection battle looms.

Indeed, the company’s 11 February release of a brief video clip raised more questions than it answered, teasing a sleek head-on view but revealing precious little firm detail about its candidate. Rivals should note, however, that its offering is no warmed-over Apache, and looks set to pack a significant punch.

With its strategy, Boeing appears to be repeating the approach adopted so effectively in earlier contests to supply the US Navy with an unmanned tanker and the US Air Force with a replacement fleet of advanced jet trainers. In both those instances, it surprised its adversaries by unveiling not a full-scale mock-up but what was essentially a flight-ready prototype.

The coming weeks will reveal whether the company’s shrouded approach represents its best approach to the target, but the most effective combat helicopter is always the one that its adversaries do not see until it is too late to react.