One year ago, many observers doubted that Lockheed Martin would succeed in keeping its aggressive production ramp-up for the F-35 on track, given the programme’s troubled past.

But, after shipping an impressive 91 of the stealth fighters in 2018, Lockheed not only matched its target last year, but bettered it by three aircraft, transferring 134. This was a huge achievement for the company and supply chain partners like BAE Systems and Northrop Grumman: particularly when considering that their annual output had been just 66 examples in 2017. 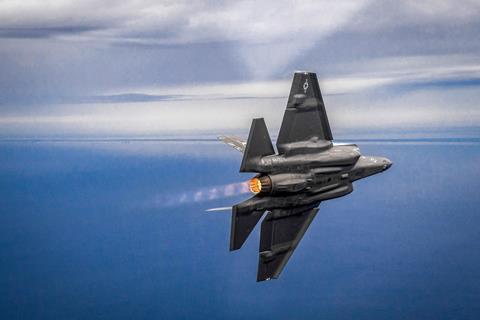 The good news is that the programme’s stated requirement in 2020 is for only a slight increase, to reach 141 Lightning IIs. This levelling off should provide some welcome breathing space for industry before a final push to hit peak output of beyond 170 per annum from 2023.

While it still has its fair share of detractors, the strong production performance last year will have delivered a real confidence boost to the type’s manufacturer and customers alike.

Many challenges remain for the long-delayed and over-budget F-35, despite the A-model jet’s unit cost falling below $80 million this year. Lockheed has still yet to transition from the programme’s low-rate initial production phase, availability rates are below expectations, operating costs must drop by around a third, and early examples require extensive – and expensive – upgrades.

But, with the US military soon to turn its attention to developing next-generation fighters, hitting cost and schedule targets will be vital in safeguarding F-35 order plans. The US Congressional Budget Office estimates that acquiring an FA-XX successor for the US Navy’s Boeing F/A-18E/F Super Hornet fleet alone could cost around $67 billion – perhaps the Lightning II could prove to be genuinely affordable after all?