The last Farnborough air show feels an age ago: before the 737 Max grounding, Brexit and Covid-19. Can it thrive in an era of climate crisis and help with the race to net zero?

Many love it and probably as many others loathe it, but there is no doubt that the Farnborough air show – returning after a pandemic-enforced four-year break – remains among the aerospace industry’s marquee events.

Covid-19 challenges aside, the world of aviation has changed in a very dramatic way since the last gathering took place at the historic Hampshire airfield in 2018. Phrases like “climate crisis” and “net zero” were not hot topics at that show, but certainly look set to dominate proceedings this time. 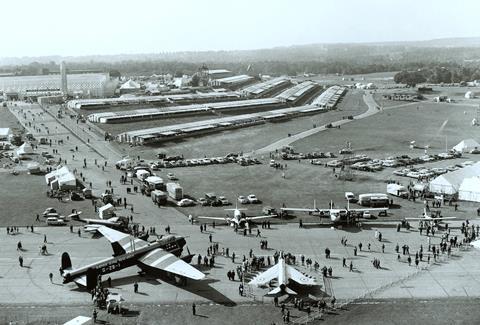 Days gone: the Farnborough of 1962

The environment did not feature strongly in our show report from the last Farnborough – the headlines from which now read as though from another age.

Airbus made a passionate case for further A380 sales (while HiFly used one of the superjumbos to publicise the plight of coral reefs); then-Boeing chief executive Dennis Muilenburg was in no rush to launch a New Mid-market Airplane; a Boeing acquisition of Embraer’s commercial arm was still on the cards; and Mitsubishi Aircraft was upbeat about its MRJ90.

That was before two fatal Boeing 737 Max crashes derailed one of the industry’s “big two”, Brexit, the pandemic, and now soaring global prices for almost everything – driven in no small part by Russia’s war in Ukraine.

Farnborough’s return feels hugely welcome, but its challenge is to transform with the industry and remain relevant by proving that face-to-face events still matter in a world where Teams and Zoom calls can remove the hassle of international travel. Add to this the unpredictable British summer weather and a risk of major travel disruption for those venturing from London by rail, and its organisers face quite the task.

This will not be the flying spectacular of decades past, with public displays at the end of the week no longer part of the plan. Instead, as well as championing the best of aerospace as it always has, Farnborough International wants to drive the conversation around its future, by hosting debates and seminars on topics ranging from sustainability to workforce challenges.

For those accustomed to watching the latest generation of airliners gracefully displaying a level of agility never called on in commercial service, and military jets drowning out conversation, Farnborough will still have attractions to offer. But perhaps its bigger contribution will be in drawing together the companies and minds capable of transforming the industry for the challenge ahead: how to fly without it risking costing the earth.

Thankfully, the UK’s aerospace sector is showing the kind of innovation and commitment that will be needed to overcome the issues facing us – as detailed in our pre-Farnborough package, including the likes of Aeralis, BAE Systems, Rolls-Royce and Spirit AeroSystems UK.

Get it right, and Farnborough could recapture its past glory; but a failure to seize this opportunity puts the UK at risk of failing to draw on its proud and pioneering heritage.