Why Comac is playing long game with ARJ21

From a certain standpoint it is easy to dismiss the Comac ARJ21. Cynics scoff that it is nothing more than a warmed-over McDonnell Douglas MD-80, offering airlines yesterday’s technology today.

A development cycle that stretched across decades and early production examples that appeared to lack sophistication – Wikipedia describes the regional jet as “structurally conservative” – have done nothing to dispel the impression of a deeply underwhelming programme. 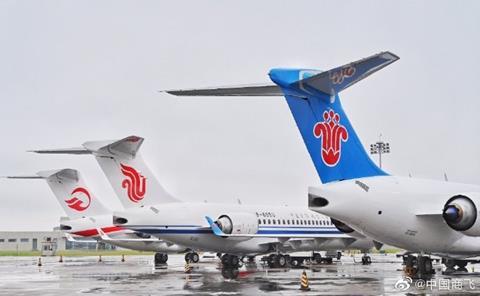 Of course, with Beijing holding a stake in all the businesses involved, there will always be doubts about the motivation for the orders in the first place, but the success of the programme should not be judged on those deals in isolation.

It is the simultaneous delivery of the first examples to those blue chip carriers – Air China, China Eastern Airlines and China Southern Airlines – and the increasing maturity of the twinjet and Comac’s manufacturing and support processes that are the key measures.

Yes, the ARJ21 can be viewed as a modest success in its own right, but its value will be seen further down the line as the airframer’s future programmes progress.

Compared with its Western rivals Comac is an aerospace fledgling.

That is the point of the ARJ21 – to allow the manufacturer to hone its design, integration, manufacturing and support capabilities before the arrival of more sophisticated jets such as the C919 and CR929.

Whether Comac has learned these lessons remains to be seen, but to assess the regional jet against purely financial benchmarks is to misread the programme’s true purpose.