There remain great challenges to designing, building and fielding a reliable hypersonic weapon, despite the US Department of Defense’s recent successful test flights of the Common Hypersonic Glide Body and the approaching opening of the USA’s first hypersonic missile factory.

Overcoming these seven technical obstacles is essential to advancing hypersonic missile technology to an operational state, according to leading experts at Lockheed Martin, Northrop Grumman and Raytheon Technologies. 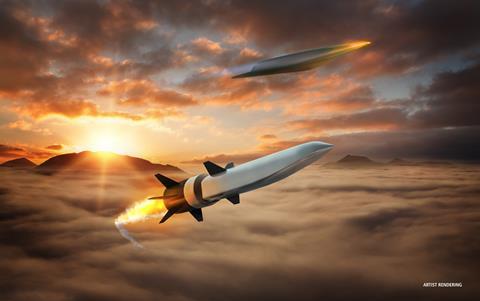 Flying through the sky at more than five times the speed of sound creates air friction, which generates a lot of heat. Temperatures on hypersonic vehicles can reach as hot as 2,200°C (4,000°F), says John Varley, vice-president of Lockheed Martin Missiles and Fire Control’s Close Combat business unit. By comparison, steel melts at 1,370°C and titanium at 1,670°C, he notes.

“Even then, metallic thermal shields can be heavy and limit range and manoeuvrability. And, traditional carbon-carbon manufacturing methods can require a high degree of touch labour,” says Varley. “New materials and manufacturing methods to rapidly produce lightweight and robust thermal protection systems will be a game-changer.”

Still, managing heat on the outside of a hypersonic weapon is but one challenge. The situation is worsened by heat-generating electronics inside the weapon, says John Wilcox, Northrop Grumman’s vice-president of advanced programmes and technology.

“Electronic components are analogous to space heaters. Those space heaters live inside a thermos, the hot structure of the vehicle, which is surrounded by a convection oven, the freestream air,” he says. “It’s important to know how to keep the ‘space heaters’ from burning up, and keep the ‘thermos’ from melting both inside and out.”

Hypersonic missiles are high-stakes weapons, so it is important to be able to communicate with the munitions, in order to abort or redirect a strike. However, communication is a significant challenge at hypersonic speeds.

“One critical aspect is transmitting and receiving information through the potentially plasma-laden hypersonic airflow. At hypersonic speeds, the aerothermal heating can impart so much energy into the air that the electrons surrounding the air molecules dissociate and create plasma,” says Varley. “This plasma can block radio frequency waves such as communications signals.”

This problem is well known to the public, as it has occurred when manned space capsules and the Space Shuttle have re-entered the atmosphere and experienced a plasma blackout, he notes.

“A system moving at a mile per second needs to operate with an incredible degree of precise manoeuvrability. Knowing where the system is in space and with relation to the waypoints or targets is critical to successfully completing the mission,” says Varley. “This can be achieved through internal measurement units or off-board time synchronisation, both of which require precise and robust electronics and subcomponents.”

A hypersonic missile’s speed is not unique – ballistic missiles also descend at rates greater than Mach 5. What makes a hypersonic missile especially dangerous is its speed, plus the ability to manoeuvre. The missile’s speed gives a defender only minutes to respond. The weapon’s meandering makes its flightpath and final destination harder to predict. Alternatively, the high-arching and unchanging trajectory of a ballistic missile is much easier to calculate, which makes them more vulnerable to being shot down.

“Travelling at such high speeds means any sort of manoeuvre induces high structural and aerodynamic loads on the vehicle,” Varley says. “Systems must be designed to withstand these loads and ensure that their control systems can create the necessary forces.”

Designing a hypersonic weapon, in theory, is one challenge. Making all the parts fit together and fly is quite another. For example, given the tremendous heat that the weapons are subjected to, thermal shields are needed, which can add weight and reduce room for electronics. Yet, the complex forces acting on a hypersonic vehicle mean sophisticated electronics are needed for flight control. Cramming in the necessary electronics, while not adding too much weight and size from the thermal shield, is a balancing act.

“It’s not enough to fly really fast. Integration is the most important aspect to ensure a hypersonic system will be effective. All the pieces need to work, work at hypersonic speeds, and fit in the appropriate sizing constraints,” says Wilcox. “A systems approach to design, manufacturing, and operations is key to every aspect of a hypersonic system.”

Fine-tuning the aerodynamics of boost-glide vehicles is critical to producing a weapon with extended range, reliability and accuracy.

“A high lift-to-drag ratio enables long-range flight, but it has to be done within certain sizing constraints. Generally, these constraints mean there isn’t room for wings or large lifting surfaces,” says Wilcox. “The body also needs to be appropriately sized to carry a payload.”

Moreover, scramjet-powered hypersonic cruise missiles have their own special requirements.

“Air-breathers need to have space for the propulsion system and fuel. A systems approach to aero-physics and mechanical integration is key to overcoming this challenge,” adds Wilcox. “In addition, an aerodynamically efficient inlet is the key to thrust margin and cruise efficiency.”

“Engineers building sub- or supersonic aircraft have the benefit of years of research and publications when they are analysing systems,” says David Scott, senior director of advanced effectors in advanced technology at Raytheon Missiles & Defense. “Engineers working on hypersonic systems are in many cases developing this data in tests and simulations that are underway today.”

The need to share targeting data becomes more urgent with hypersonic missiles, which are designed to take out an enemy in a short, fleeting moment. For the weapon’s full capability to be realised, multiple types of military equipment must be able and ready to quickly share information over a new battlefield network.

“Warfighters need the ability to see targets and communicate with platforms, such as ships, aircraft, tanks, and effectors, such as missiles, bombs, and projectiles,” says Scott. “This problem gets more complex with hypersonic systems that are designed to fly farther and faster into heavily defended areas.”