8 key hypersonic missile efforts for the US Department of Defense

In a race to catch up with China and Russia, the US Air Force (USAF), Army and Navy (USN) are sharing funding, designs and pieces of technology in their effort to develop hypersonic missiles. The development approach relies on progressing several designs in parallel and borrowing features from other military services when useful. In some cases, an aerospace manufacturer working as a prime contractor on a programme, leading several business rivals as subcontractors, will then also simultaneously take a secondary role on another related project, which is in turn led by one of its rivals.

These heady early days of industry and service co-operation will probably not last, but represent the all-hands-on-deck urgency that the US Department of Defense believes is needed. 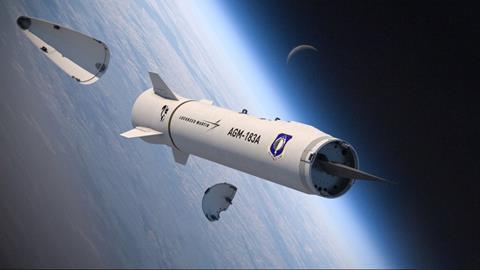 The fastest and easiest type of hypersonic missile to field appears to be the boost-glide weapon. The Pentagon is advancing two designs. The weapon is essentially a hypersonic glider mounted on the nose of a ballistic missile or booster rocket. After climbing to a high altitude, in some cases within the Earth’s atmosphere, the glider is released and travels down to its target at speeds of up to Mach 20.

The ability to manoeuvre the glider and its relatively shallow flightpath make it much harder to see the weapon and predict where it is going to land, compared with the high-arching trajectory of a conventional ballistic missile. The USA plans to keep its hypersonic missiles as conventional weapons, perhaps using only the kinetic force of the missile to destroy targets. Boost glide vehicles are seen as possibly useful for destroying enemy air defences, long-range missiles or artillery and time-critical targets.

The C-HGB was initially a tri-service programme, though it became a US Army-USN venture when it was cut from the US Air Force’s fiscan year 2021 budget in February 2020. The programme has been a bright spot in the USA’s efforts, with three successful launches in 2011, 2017 and March 2020. One launch in 2014 failed when the glide body did not separate from the booster.

The glide body is derived from a US Army project, the Alternate Re-Entry System, and was designed by Sandia National Laboratories. In renderings, the vehicle has a cone-like shape. A Dynetics-led team is working on building 20 production examples of the glide body.

The TBG weapon is a joint effort between the Defense Advanced Research Projects Agency (DARPA) and the USAF. The glider is wedge shaped, like an arrowhead, and reportedly has a very high lift-to-drag ratio. The vehicle is derived from the Falcon Hypersonic Technology Vehicle 2, a DARPA project that flew in 2010 and 2011 for about 9min each time before ending its journey prematurely.

The USN’s CPS programme plans to carry the C-HGB atop a submarine-launched booster rocket. The service wants to achieve initial operating capability (IOC) on a Virginia-class submarine by FY2028.

The programme received $512 million in funding in FY2020 and the service requested $1.01 billion for FY2021. Lockheed Martin is the prime contractor developing the weapon.

The US Army’s LRHW will pair the C-HGB with a USN booster rocket and a mobile ground launching vehicle. The service wants to conduct flight tests on the weapon between FY2021 and FY2023. It aims to transition the vehicle into a programme of record by FY2024.

The programme received $404 million in funding in FY2020 and the service requested $801 million for FY2021. Lockheed Martin is the prime contractor for the effort.

The USAF’s leading hypersonic weapons programme is its ARRW (pronounced “arrow”), a boost-glide weapon based on DARPA’s TBG vehicle. The service cancelled its other boost-glide effort, the HCSW, because it thought the ARRW was more cost effective and promising. Part of ARRW’s promise is its smaller size, which enables the B-52 to carry twice as many. A smaller size might also allow the ARRW to be carried on the F-15 if its size does not increase during development.

The service completed a successful captive carry test of the vehicle under the wing of a B-52 in June 2019 and reportedly expects to flight test the weapon before the end of 2020. The USAF has said it wants ARRW to achieve IOC by FY2022.

The HCSW (pronounced “hacksaw”) was to be a boost-glide weapon that would use a modified version of the C-HGB and would be air launched from the B-52. The USAF revealed that it intended to cancel the programme when it was dropped from its FY2021 budget proposal, released in February.

The HCSW was less advanced and larger than its compatriot ARRW, so under budget pressure the USAF decided to cancel its participation in the programme. The service let the HCSW development team complete the weapon’s critical design review before shutting down the project. Employees were to be reassigned to other hypersonic programmes.

The programme received $290 million in funding in FY2020. Lockheed Martin was the prime contractor.

The DARPA-run OpFires programme is to be a ground-launched boost-glide system based on the TBG vehicle. It will eventually be transitioned over to the US Army. The OpFires programme received $50 million in FY2020 and DARPA requested another $40 million for FY2021. Lockheed Martin is leading integration of OpFires.

Flight testing is scheduled to begin in 2022.

DARPA and the USAF’s HAWC is to be a air-breathing hypersonic cruise missile. While scramjet-powered hypersonic cruise missiles are not as fast as the boost-glide variety, they can be smaller because because they do not need to carry oxygen fuel at hypersonic speeds. Instead, they scoop air from the atmosphere. Reduced weight means missiles such as HAWC could be carried on a wider variety of aircraft.

Flight testing for HAWC is expected in FY2020.

The HAWC programme received $20 million in FY2020 and requested $7 million for FY2021. A Raytheon-Northrop Grumman team and a Lockheed Martin-Aerojet Rocketdyne team are offering competing designs in the HAWC effort.