Meet the new boss, same as the old boss. That is more or less the conclusion of analysts watching the first few months of US President Joe Biden’s arms export decisions and policy statements. 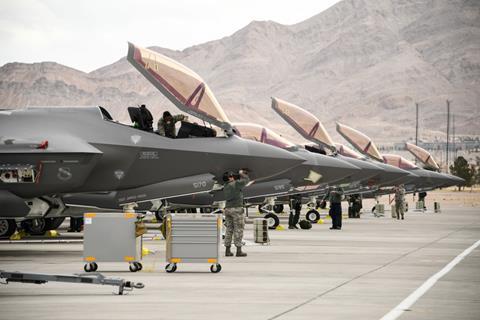 Several precedents established during the term of former president Donald Trump are likely to stand. And, export policies that stretch back to president Barack Obama will also likely continue.

To be sure, Biden has indicated he plans to depart from previous policies in a few areas. The administration is likely to be warier of selling offensive weapons to Saudi Arabia, a country which is entangled in a brutal civil war in neighbouring Yemen. And, he is more likely to lean on allies and arms control agreements to make decisions, say analysts.

How much weight Biden explicitly places on the economic considerations for arms exports is not as clear. The production run of several older aircraft types have been extended in the past via Foreign Military Sales (FMS) deals. As US modernisation programmes crowd out the Department of Defense’s (DoD’s) appetite for some older models, will international sales keep those aircraft in production for years to come?

Last, the administration is also likely to face tricky new issues selling digitally-connected aircraft and weapons, say analysts. New aerospace products, including everything from bombs, in-flight refuelling tankers and stealth aircraft, are increasingly valued based on their network effect – their utility as part of a larger ecosystem of connected platforms. Who can be trusted to join this military-of-things network is a difficult question to answer.

That is good news for the United Arab Emirates (UAE), which received approval in late January from the Trump administration for a $23 billion arms sales package that included 50 Lockheed Martin F-35As and 18 examples of the General Atomics Aeronautical Systems MQ-9B UAV. The deal also included air-to-air and air-to-surface munitions. 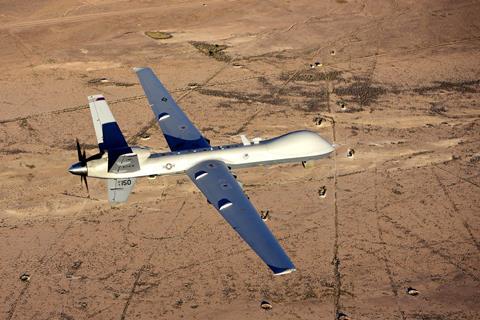 The Biden administration acknowledged in April that it would likely allow the sale of the F-35A and MQ-9B to the UAE, marking the first time that an authoritarian state was granted permission to buy either of the aircraft.

The sale of large UAVs, such as the MQ-9B, had prior to the Trump administration been subject to a strong presumption of denial from the US Department of State under the Missile Technology Control Regime (MTCR), an export control agreement voluntarily enforced by 35 member states. That limited the sale of the aircraft to only close US allies, such as NATO members France and the UK.

However, in July 2020, the Trump administration changed US policy regarding the MTCR, removing a strong presumption of denial for UAVs with a maximum speed below 430kt (800km/h). That cleared the way for the Department of State to approve the sale of four MQ-9Bs to Taiwan last November and then the 18 examples for the UAE.

A sales boom to manufacturer General Atomics, which had long complained that rival Israeli and Chinese manufacturers where seizing market share due to the restrictions, the new MTCR policy does not look likely to be reversed in total by the Biden administration, says Bill Hartung, director of the arms and security programme at the Center for International Policy.

“However, they want to have talks among allies about some restrictions on drone exports, that would be separate from the MTCR,” he says. “That may be, but that would be a lengthy process. I think for the moment, it’s going to be the Trump policy and deals Trump’s already made will probably stand.”

While new policies toward the MTCR may mark a precedent, it is not clear whether the F-35 sale to the UAE is the start of expanded sales of the type.

“That’s a very controversial deal. If they’re willing to do that, it does open the question of, who else might they be willing to offer such technology to?” says Hartung. “But, I think it may be case by case.”

Qatar has requested the F-35 and Saudi Arabia may consider the aircraft if it became an option, he adds. Whether either of those two autocracies would be granted permission to obtain the combat aircraft remains to be seen. In the meanwhile, the F-35A is being evaluated in competitions in Finland and Switzerland.

Despite some policy similarities with the Trump administration, it does not appear that all former deals will proceed during Biden’s presidency.

In January, Raytheon dropped the anticipated sale of an offensive weapon system to an unnamed Middle Eastern country, possibly Paveway precision-guided bombs to Saudi Arabia, due to concerns that the incoming administration would not grant it a direct commercial sales export license. Biden and Democratic lawmakers have been critical of Riyadh’s airstrikes in neighbouring Yemen, which is in the midst of a civil war, as the attacks allegedly have caused civilian casualties. 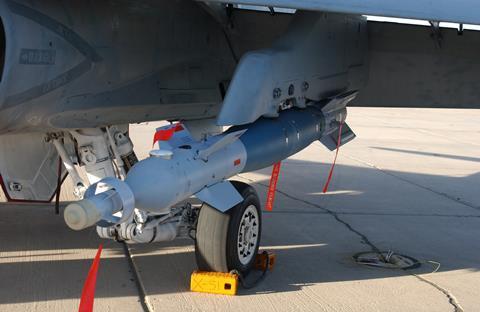 The Biden administration is likely to emphasise the sale of defensive weapons, say analysts. In light of that new policy, defence manufacturers are adjusting their sales pitch.

“If you think about Patriot and some of the other defensive systems, we have no issues with getting licenses. But offensive weapons [are] a little bit more difficult,” said Greg Hayes, Raytheon’s chief executive, in the company’s 2020 fourth quarter earnings call in January. The Patriot system is designed to shoot down incoming tactical ballistic missiles, cruise missiles, UAVs and aircraft.

Raytheon has not given up on the sale of offensive weapons, however.

“As we go forward, what we’re going to do is we’ll work with the [DoD],” says Hayes. “We’ll try and do these through [FMS] as opposed through direct foreign sales to make sure we’ve got alignment with [the DoD] and the administration before we book any of these.”

What’s more, Raytheon does not see a slowdown in sales. When asked by a stock analyst in the January earnings call if the cancellation of the offensive munitions sale was a sign of declining future weapons sales to Middle Eastern countries, Hayes did not mince his words.

“No, no, no,” he said. “Look, peace is not going to break out in the Middle East anytime soon.”

Under the Trump administration, production of Cold War-era aircraft continued to be extended as manufacturers found ways to modernise and sell old products with new computing and networking capabilities.

One example of that trend is the Boeing F-15, which was first delivered to the US Air Force (USAF) for testing in 1972, and now looks poised to have more than a 60-year production run. Under Trump, Boeing received a $6.2 billion contract in 2017 to manufacture 36 examples of the F-15QA for Qatar. 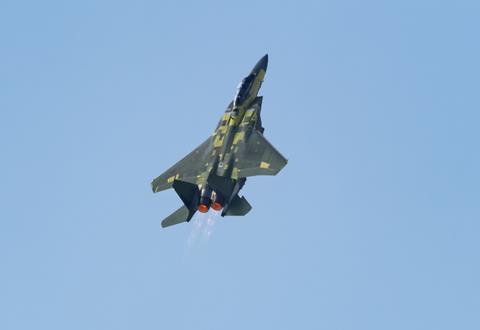 That jet comes with fly-by-wire flight controls, a digital cockpit, an active electronically scanned array (AESA) radar, an electronic warfare (EW) suite and what Boeing calls “the world’s fastest mission computer”. Those improvements were enough to convince the USAF in 2020 to buy its own version, the F-15EX Eagle II, to replace some of its ageing F-15C/D fighters.

Those new capabilities have longtime F-15 operators such as Japan looking to upgrade. The Department of State approved an FMS package for Japan in 2019 valued at up to $4.5 billion to upgrade 98 F-15Js, originally manufactured under license by Mitsubishi Heavy Industries. As of April, Tokyo and Washington were still trying to iron out costs and scheduling disagreements for upgrading the fighters to the new “Japan Super Interceptor” standard.

For an Indian air force requirement for 110 fighters, Boeing is pitching the F-15EX, as well as its F/A-18E/F Super Hornet. Lockheed is offering its F-16V, renamed the F-21 for the same programme. The Indian navy is also looking for 57 aircraft carrier-based fighters, with the Super Hornet being offered for that contest.

More generally, the USAF is looking to see if offering new “commoditised” aircraft, including the MQ-9 and F-16, will speed up sales by reducing back-and-forth negotiations. For example, in August 2020, Lockheed was granted permission by the service to sell a base model version of the F-16 Block 70/72. That aircraft would come with a standardised price and set of features, including avionics, mission systems, an AESA radar, EW suite, automatic ground collision avoidance system and engine, and other common components.

In the coming years, if US DoD spending begins to sag on particular aircraft there might be an incentive for the Biden administration to push FMS business to maintain American jobs. That appeared to be the case when budget sequestration in 2013 crimped Pentagon spending and the Obama administration was incentivised to approve the sale of the F-15SA to Saudi Arabia, says Greg Sanders, deputy director of the Defense-Industrial Initiatives Group at the Center for Strategic and International Studies.

“One way of trying to balance that pressure had been to look for export markets, where appropriate, to allow US industry to have some of the economies of scale or other benefits, that they might lose out by reduced demand from DoD,” he says.

The US Army has sought to backfill production of the Boeing CH-47 Chinook in Philadelphia, Pennsylvania with FMS orders, as it starts to spend money on other priorities, including development of Future Vertical Lift rotorcraft. In 2020, the service said it could keep production running at a rate of 18 helicopters annually until at least 2025 with a partial reliance on export sales. 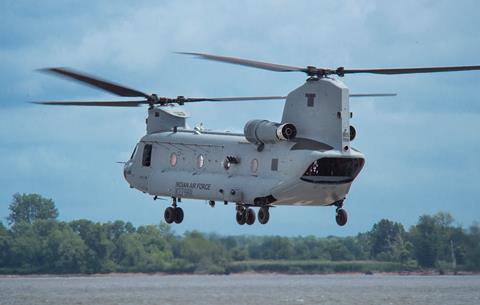 Boeing has enjoyed steady export success with its CH-47 Chinook

In April, the UK reportedly agreed to a $2 billion purchase of 14 Chinooks to replace its Royal Air Force’s oldest in-service examples. Also in April, Australia agreed to buy four F-model examples of the tandem-rotor helicopter.

One area in which the Biden administration may set precedent is on the sale of networked weapons and aircraft. As part of the Pentagon’s Joint All-Domain Command and Control initiative, US manufacturers are trying to develop aircraft and weapons that are highly networked and have open-systems architectures which allow for the plug-in-play of upgrades.

Connectivity may actually bring more countries into the FMS ecosystem, say analysts. “If you have countries that are buying a fair number of high-end systems, it makes sense to have systems that work together,” says Sanders.

Countries like Saudi Arabia and the UAE might be less inclined to consider buying aircraft and weapons from China or Russia, as it would undermine their fleets’ effectiveness, he notes. That might make European aerospace manufacturers, which have interoperability with US systems via NATO standards, the alternative arms dealers of choice. Nonetheless, states like Egypt and India, which have historically purchased mixed fleets of aircraft as a means of diplomatically balancing competing foreign interests, may still be resistant to the network sales pitch.

Networking aircraft and weapons with platforms controlled by other nations would also come with risks, however, including cyber security concerns.

A preview of this problem is seen in the USA’s decision to refuse delivery of the F-35 to Turkey. Ankara bought and received the Russian-built Almaz-Antey S-400 air-defemce missile battery in 2019, despite protests from Washington that it is technically incompatible with the F-35. Another concern was the possibility that Russia could use a cyber-backdoor in Turkish S-400s to observe vulnerabilities in F-35s flying nearby. Ultimately, the nation’s decision to buy the S-400 caused Washington to eject the country from the F-35 Joint Strike Fighter programme.

That sort of incompatibility problem is likely to surface again in future FMS agreements. The Biden administration will have to carefully judge the political alignment and trustworthiness of arms recipients.

“The more things are networked the larger the attack surface is for cyber operations,” Sanders says. Buyers will have to also weigh risks, he says. “Defense technology security, I think is going to continue to be a high point of emphasis for any high-technology buyers.”