The Lockheed Martin F-35 faces three major challenges that cannot be overcome by yet further investment. It is too complex to maintain high readiness rates, suffers from very short range and costs vastly more than the Kratos Defense & Security Solutions XQ-58A Valkyrie, an experimental unmanned air vehicle (UAV) that can carry out many of the F-35’s tasks while being much more survivable in a modern conflict. 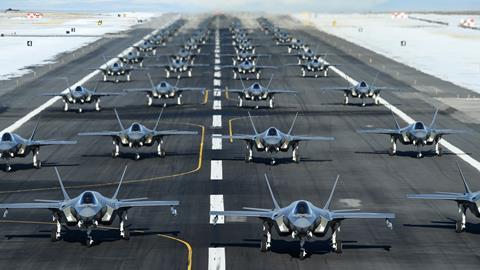 Manned fighter is vulnerable to attack

First, the F-35’s complexity reduces its reliability. Twenty-six years after the Joint Strike Fighter programme started, Robert Behler, US Department of Defense (DoD) director for operational test and evaluation, noted: “No F-35 variant meets the specified reliability rate” of 65% and the aircraft were “breaking more often and taking longer to fix”. He also reported that the jets “lagged” by “a large margin” the more complete measure of full mission-capable status.

Second, the F-35A has an operational range of about 675nm (1,250km), while China can deploy numerous UAVs, ballistic and cruise missiles with ranges that greatly exceed it. Today, Chinese forces could attack US bases in the first and second island chains with a mix of missiles and drones.

This means the F-35 can only operate safely from bases too distant for it to join the fight without extensive tanker support. Yet the tankers are not stealthy and the Chinese have developed tactics and weapons specifically to destroy them. If tankers are unavailable because of high risks, the F-35 cannot join the fight at all.

But the biggest issue for the fighter is the fact that new, cheaper emerging technology can outperform it in key areas for a fraction of the cost. The XQ-58A is capable of being launched and recovered without a runway, is stealth configured (but not coated), has a range of 3,000nm, a cruising speed of Mach 0.72, and can carry 270kg (600lb) of ordnance internally – either two small-diameter bombs or two air-to-air missiles.

In stealth mode, the orders-of-magnitude more expensive F-35 can only carry eight small diameter bombs or four air-to-air missiles. Lockheed recently announced it has a prototype rack that can increase the load to six air-to-air missiles. Further, Lot 13 of the F-35A will cost $80 million per aircraft. However, this is not the final cost, since testing continues to find faults that need to be fixed.

Each F-35 had a projected service life of 8,000h at $44,000 per flight hour in fiscal year 2018, dropping to $34,000 by FY2024. Thus the lifetime cost for purchasing and operating an F-35A is between $352 million (if it meets cost reduction goals) and $432 million. In contrast, Kratos has offered to sell the Valkyrie for $2 million per aircraft in lots of 100. And since it is autonomous, each Valkyrie does not require flight hours every month to keep pilots proficient.

Besides, this does not include the tremendous savings the autonomous Valkyrie gains from eliminating the personnel costs associated with the pilot, much of the maintenance team and the airfield. Nor does it include the personnel training pipeline costs for these specialities – or their retirement and healthcare costs.

The USA could probably buy well over 300 X-58As for the fully loaded cost of one F-35. In short, four Valkyries can deliver the same payload to over twice the range for about one-fortieth of the lifetime costs of an F-35A. And because of their range, Valkyries can strike many targets the F-35 simply cannot reach.

Even more importantly, the Valkyrie can defeat the Chinese reconnaissance/strike complex. Unlike the F-35, it does not require an easily located and targeted fixed base. To increase its survivability, Kratos is experimenting with using a standard shipping container to launch the Valkyrie. Thus it can remain hidden in the container until just before launching. This capability means the UAV can launch from almost any flat surface and recover at another location. It can also operate from ranges exceeding many of China’s weapons systems.

The XQ-58A obviously has only a fraction of the capabilities of the F-35 but it outperforms it dramatically in two areas – range and survivability on the ground. The F-35’s capabilities are irrelevant if it cannot range the fight or survive attacks on its airfields. The fact that the Valkyrie can survive on the ground and has the range to get to the fight certainly means it can be a partner for the F-35 and, sometime in the not too distant future, its successor will replace the F-35.