Daytona, Florida is well known for two things: Spring Break and fast cars. The town on the Atlantic coast attracts thousands of young people in the middle of winter to celebrate an annual festival on its white sandy beaches. About the same time of year, racing fans flock to the Speedway to watch an iconic 500 mile (800km) high-octane automotive free-for-all.

But about a mile southeast of the Speedway’s grandstand and across the airport’s runways, a small start-up is looking to transform urban air mobility (UAM) aircraft and the engines that power them by going all in on hybrid technology. 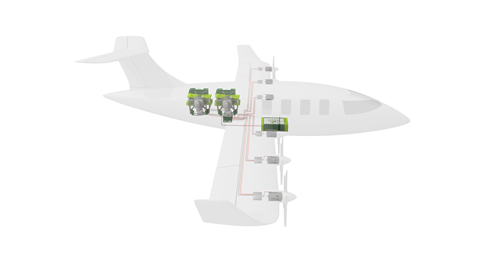 Founded in 2017, VerdeGo Aero began life as a UAM designer. Hybrid-electric flight pioneer Eric Bartsch and Pat Anderson, director of the Eagle Flight Research Center at neighboring Embry-Riddle Aeronautical University, teamed up with Erik Lindbergh – a pilot whose grandfather was none other than Charles, famously first to fly across the Atlantic solo, in 1927.

These three flyers threw their dual-tilt-wing, eight-propulsion-pod vehicle design into the air taxi ring – joining about 100 other companies attempting to fast track development of similar vehicles.

Like its prospective competitors, VerdeGo’s air taxi was sleek and futuristic, but unlike most of the others, it had a hybrid-electric engine which, the founders said from the get-go, could deliver performance far beyond that of a pure battery-powered aircraft.

But about a year in, they decided that the chances for success in that kind of crowd – competing with the likes of Airbus and Boeing – were slim. So the company pivoted to its deep expertise in hybrid-electric powertrains, where chief executive Bartsch now hopes to make a mark.

“We had what we believed was a very good next-generation aircraft design platform,” he says. “But we realised that the thing that the market needed the most was our powertrain expertise and our understanding of what goes behind making one of these aircraft successful.”

The company stopped development of the aircraft to leverage its core knowledge, and to become a technology vendor to the entire industry working on new aircraft related to electric propulsion. The result was the VerdeGo Integrated Distributed Electric Propulsion (IDEP) system.

“We went from competing with all of these other programs to being a partner with a lot of them,” Bartsch says – a much more viable and enviable situation to be in.

The company’s shop is in a brand-new hangar neighbouring the Eagle research centre, ensuring easy cross-pollination of ideas and knowledge, as well as proximity to some of the world’s brightest aviation technologists.

“Embry-Riddle has done a bunch of research and we’ve now got exclusive access to some intellectual property on how to control noise versus efficiency and balance that out, depending on what mode of flight you are in,” Bartsch says. “This is really important because it means you can be quiet when you need to be quiet, and then you can be efficient when you’re up at altitude, maybe away from population centres.”

Noise is one of the major sticking points when it comes to future public acceptance of UAM vehicles, he notes. But that’s not the only reason a hybrid is superior to a pure-play battery-powered aircraft. Safety is a big one as well, and given current Federal Aviation Administration (FAA) reserve fuel prerequisites, it’s hard to see how a battery-powered electric vertical take-off and landing (eVTOL) aircraft will gain quick certification.

“If you are designing aircraft that are supposed to fly 12min flight segments across a city, the mission might be a quarter of the reserve energy requirements,” says Bartsch. Currently, depending on the type of flight an aircraft undertakes, the FAA requires it to carry up to 45min of fuel or energy as a safety margin.

“The first couple generations of these aircraft, if we want them to be commercially viable, they need to be hybrids,” he says. And the advantages go beyond just the fuel reserves. While UAM companies such as Uber Air plan out their vertiport infrastructures across urban areas, where aircraft can be recharged after every flight segment, a hybrid option allows a vehicle to fly multiple segments before it needs a top-up.

That said, the FAA, while still keeping a focus on its primary mandate, safety, seems to be more receptive to fresh ideas that will power these new types of aircraft, Bartsch says. Manufacturers like VerdeGo are seeing some openness when it comes to testing new concepts.

“I’ve really been impressed at how the FAA is approaching this new market, because there are a lot of crazy new things that are happening. But the thing is, some of these crazy new things also happen to work pretty well,” He says. “I think they are striking a different balance in how they engage, and that’s a real positive for fostering innovation.”

In 2019, VerdeGo began collaborating with two brand-name aerospace companies with long histories, and who have now become investors and strategic partners in the Florida start-up: Continental Aerospace Technologies, builders of some of the most popular general aviation piston engines in the world, and Seyer Industries, a supplier of components, assemblies, and electronics to both military and commercial aerospace programmes.

“Having them as strategic partners is really powerful,” Bartsch says. “We can leverage their scale and their expertise in ways that a start-up on its own could not do. It allows us to operate and make an impact that’s bigger than just our four walls.” A third as-yet unnamed major strategic partner is waiting in the wings.

With Continental’s support, VerdeGo is now looking at supplying both eVTOL and fixed-wing Jet-A piston-powered aircraft with its modular designed powertrains. The company has begun to receive inquiries for a diversity of applications that go far beyond UAM or single- to two-seat air taxi aircraft. Larger air vehicles, up to about six or seven seats, will also be able to incorporate VerdeGo’s IDEP system, which can deliver continuous power of 350kW and peak power, for a vertical take-off, of 1MW.

“We can put a twin-generator, twin-engined system with a battery pack for augmentation in the aircraft to go up to the 7,000lb [3,175kg] range, and we can deliver plenty of power for that aircraft,” he says. “One of the unique things about a hybrid is it allows you to size the battery for the take-off and landing power requirements – a lot more for vertical take-off, less so for horizontal or conventional take-off.”

A piston hybrid engine can also outplay a turbine hybrid with a cost advantage of 40% or more, because it is more fuel efficient.

And when can we see this technology in action? VerdeGo remains vague on the answer to that question, giving a general timeline of up to five years from now, depending on the product and its path to certification.

“You’re going to see some applications in the two-year time frame, and then there are some things that have a very long lead time, and for those it really is a marathon,” Bartsch says.

But even just thinking about these challenges shows how far the industry has come in a very short period of time, he adds.

“For many decades, aviation was in a mode where it was more about how do we do what we did last time, but make it 5% more efficient. Now we are doing groundbreaking new things that are radically different. And you see that whether it’s in urban air mobility or some of the other adjacent new markets that we’re working on, it’s a really exciting turning point.” 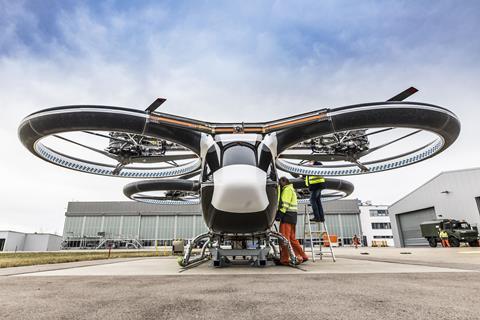 For VerdeGo, staying the race to develop a complete aircraft meant going up against the likes of Airbus