5
Gremlins in the works
Flight International

Gremlins in the works

Development of low-cost attritable aircraft could accelerate in 2020 with the US Congress eyeing at least $100 million in its upcoming budget for the new type of aircraft and the US Air Force (USAF) planning several new experiments. Attritable aircraft are unmanned air vehicles (UAVs) designed with limited lifetimes, that can be affordably manufactured in large numbers and lost to combat attrition because of their low cost.

The USAF is experimenting with the concept in a number of roles, including as loyal wingmen to manned fighter aircraft and as air-launched effects, small UAVs launched and recovered from another aircraft. The leading attritable aircraft in terms of flight time is Kratos Defense and Security Solutions’ XQ-58A Valkyrie. That UAV flew for the first time in 2019 and the USAF is considering buying 20 to 30 examples for further experimentation. 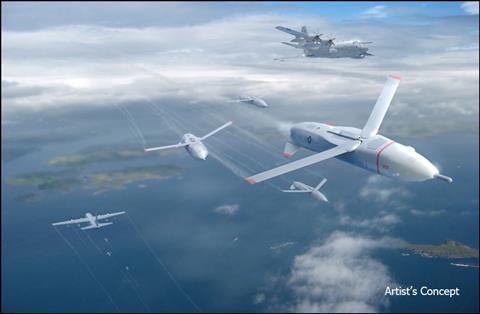 Kratos has said it is also playing a major role in another 10 UAVs under development for the USA, including for the Defense Advanced Research Project Agency (DARPA) Gremlins programme, the Defense Innovation Unit’s UTAP22 Mako and projects with names such as Apollo, Athena, Program F, Spartan and Thanatos for undisclosed and classified customers. Other manufacturers developing attritable UAVs include Boeing, Dynetics and General Atomics Aeronautical Systems. Boeing and the Australian government are developing the Airpower Teaming System, a UAV designed to fly alongside manned fighters as a loyal wingman. In November 2019, Boeing started testing the aircraft’s autonomous flight-control software on a substitute, subscale remote-controlled model aircraft.

The company plans to build three full-scale prototypes, with the first test flying in 2020. Dynetics is developing under DARPA’s Gremlins programme the X-61A, a UAV that can be air launched from and then air recovered by a Lockheed Martin C-130J. The first flight of the X-61A was delayed until spring 2020, after an earthquake damaged infrastructure of NAS China Lake in July 2019. Leading tactical UAV manufacturers are also getting into the game. General Atomics is developing a new attritable jet-powered UAV called SparrowHawk, which is intended to be air launched and air recovered by the USAF’s MQ-9 Reaper.

The company has built one prototype so far, which could be flown for the first time before the end of 2020. Small tactical UAV maker AeroVironment plans to test its Switchblade loitering munition from the wing of a Kratos Firejet target drone in early 2020. The test is a precursor to launching the Switchblade from an attritable UAV. By launching from an aircraft similar to the Firejet, the loitering munition’s reach could be increased by 200nm (370km), far beyond its usual 5.4nm range. Moreover, the USAF is looking to control future fleets of attritable aircraft using artificial intelligence (AI), a capability the service sees as allowing a single pilot or ground controller to direct multiple UAVs at once. In 2020, it will push to advance its Skyborg AI software brain, which could be installed and tested on the XQ-58A as soon as 2021.