After a scathing report from the Pentagon’s top weapons tester that called the Northrop Grumman MQ-8C Fire Scout “not operationally effective, not operationally suitable, and not cyber survivable,” the US Navy says “many” of the unmanned helicopter’s deficiencies are now on track to be resolved before its scheduled deployment in late 2021.

The MQ-8C is to be deployed aboard the service’s Littoral Combat Ship, a new class of do-it-all vessels that are designed to patrol shallow coastal waters; clearing sea mines, stopping piracy, hunting small diesel submarines and launching special forces on land assaults. The unmanned helicopter is to serve as the ship’s roving intelligence, surveillance, reconnaissance and targeting aircraft. 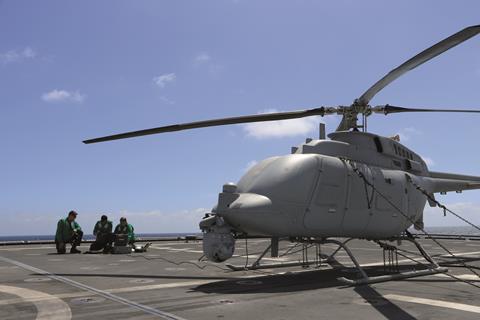 As a sign of how much the helicopter has improved in the past 12 months, manufacturer Northrop Grumman points to the MQ-8C achieving initial operational capability in June 2019. And, the company notes that the Department of Defense’s Director of Operational Test and Evaluation’s (DOT&E) report was issued confidentially in March 2019, before a public version of the assessment was released in December 2019.

“The information that was released by [the Office of the Secretary of Defense] is really kind of outdated, information that doesn’t reflect where the programme is today,” says Melissa Packwood, Northrop Grumman’s MQ-8C programme director.

In particular, the DOT&E had taken issue with the “image quality and system performance” of the MQ-8C’s Flir Brite Star II electro-optical infrared system, the “poor reliability and inconsistency” of the Tactical Common Data Link and the cyber survivability of the overall aircraft.

Northrop Grumman says it expects the forthcoming addition of the Leonardo Osprey 30 radar to shore up problems with the Brite Star II electro-optical infrared system by providing operators with a second set of information. It says the Tactical Common Data Link issue is really a problem the Littoral Combat Ship, not the helicopter. The company declines to comment on cybersecurity issues.

The USN, for its part, says most of the discrepancies noted in the report “were independent of the airframe”.

In fact, the USN is looking beyond the current set of capabilities on the MQ-8C.

In the near term, the service is working on adding the Osprey 30 radar. Manufacturer Leonardo claims the Active Electronically Scanned Array radar has a maximum range of 200nm (370km), a reach which would greatly extend the visibility of the Littoral Combat Ship. 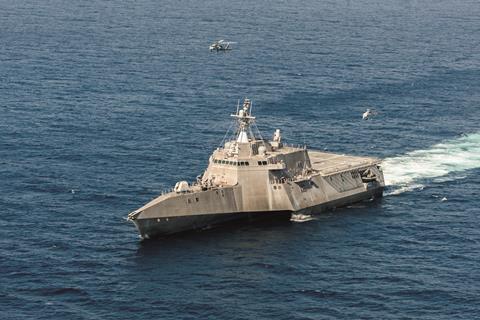 The service also intends in 2021 to start adding Link 16 communications terminals to its fleet of unmanned helicopters. Linked 16 is an encrypted, jam-resistant radio for transmitting voice and data between aircraft and ships.

In particular, Link 16 would allow the MQ-8C and Sikorsky MH-60 Seahawk to share information directly, instead of having to relay communications via a littoral combat ship.

The USN also revealed in a sole source award notice in November 2019 that it is prototyping a post-production retrofit for the UAV to accommodate potential weapon stores, such as precision guided weapons. The service says it has not yet determined what specific weapons would be suitable for the helicopter, however.

The MQ-8C is to be stored inside Littoral Combat Ships alongside the Sikorsky MH-60 Seahawk, a submarine and ship-hunting manned helicopter which carries torpedoes, Hellfire missiles and Advanced Precision Kill Weapon System (APKWS) rockets. The USN has previously spoken about adding the APKWS to the MQ-8C.

The UAV is based on the single-engined civil Bell 407 and has a payload capacity of more than 318kg (700lb). That payload capacity means the helicopter could host a number of new sensors or communication kits, says Packwood of Northrop Grumman.

“We have the opportunity to explore things such as passive targeting and beyond line of sight [communications],” she says.

Beyond-range-of-sight communications could enable the MQ-8C to be controlled by another aircraft, such as the MH-60, though Northrop Grumman has no immediate plans to add the so-called manned-unmanned teaming capability. 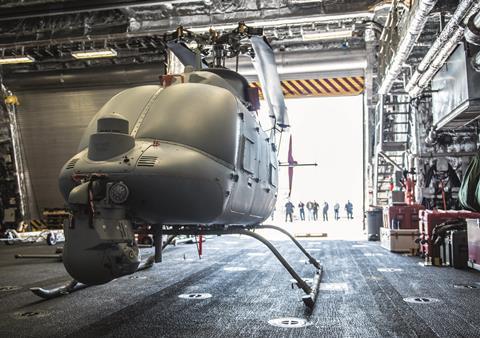 “We have already demonstrated the ability to hand off the aircraft command and control from one ship to another ground station,” says Packwood.

What’s more, a beyond-visual-range-of-site communications system could greatly increase the MQ-8C’s combat radius, which is limited to 150nm – within sight of its littoral combat ship host. The unmanned helicopter, which has a cruise speed of 115kt, has a massive fuel tank which allows for 12h of continuous flight.

“Additionally, the larger payload capacity of the MQ-8C will allow for future additions of networking and communications payloads that the smaller MQ-8B cannot accommodate,” says Soderberg of NAVAIR. “Passive targeting, mine countermeasures, and weapons are future capability enhancements currently being explored as potential opportunities for use with the MQ-8C.”

The “B” variant of the Fire Scout is based on the Schweizer 333 light helicopter and has a substantially shorter flight endurance as well as smaller payload capacity. It is currently deployed aboard Littoral Combat Ships, but the USN plans to replace and retire the UAV as the larger MQ-8C enters service.

In 2018, Northrop Grumman demonstrated the MQ-8C coordinating minesweeping working with a small robotic surface ship and unmanned submersible. The Fire Scout served as a communications relay and situational awareness platform for the surface ship and submersible, which were hunting and relaying information about the locations of sea mines.

The USN says it is also looking to expand the MQ-8C’s operational concept to include flying off the deck of Expeditionary Sea Base class ships. Expeditionary Sea Base ships are retrofitted double-hulled Alaska class crude oil carriers that are used by US Special Operations forces as a floating staging area. The USN also flies helicopters off the ships to conduct airborne mine countermeasure missions.

The MQ-8C could conceivably land on any ship with a helipad, though the USN has no plans to expand the helicopters capabilities beyond Littoral Combat Ships and Expeditionary Sea Base ships, he adds. Dynamic interface testing will establish flight envelopes for landing the helicopter in various different cross wind and sea state conditions.

Packwood notes one of the helicopters strength’s is its automatic landing system. “It is significantly more accurate than a manned aircraft, just because it’s done automatically,” she says. “It is done by software and it consistently lands in exactly the same spot on a deck.”

Northrop Grumman has delivered 32 examples of the MQ-8C to the USN. The company plans to deliver one aircraft in 2020 and then the final five aircraft in 2021. The service’s programme of record is 38 aircraft.