The USA is hurrying to catch up with China and Russia, which could field an operational hypersonic boost-glide vehicle capable of carrying a nuclear weapon as soon as 2020. That urgency has prompted the US Department of Defense (DoD) to spend $2.6 billion on hypersonic weapons research as part of its fiscal year 2020 budget. Perhaps more than any other type of aerial weapon, hypersonic missiles could drastically upset the balance of power in world affairs.

Unlike ballistic missiles, which follow a predictable trajectory and therefore can be shot down, hypersonic weapons can manoeuvre, making it difficult to predict where to launch countermeasures. Additionally, a hypersonic missile’s speed and low altitude make the weapon difficult to detect and react to. The USA and its adversaries are developing two types of hypersonic weapons: boost-glide vehicles and scramjet-powered cruise missiles. Boost-glide vehicles are launched atop a ballistic missile and then glide back down to their targets at hypersonic speeds up to Mach 20. 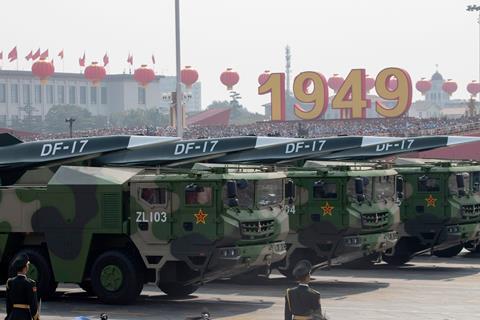 Hypersonic cruise missiles are brought to hypersonic speeds (M5+) with rocket boosters and then propelled forwards with air-breathing scramjet engines. The Pentagon has eight hypersonic development programmes on its books. The DoD is only developing hypersonic missiles with conventional or kinetic warheads, which means its weapons have to be much more accurate than the potentially nuclear-armed projectiles under development in China and Russia. Several of the USA’s programmes are to enter testing in 2020. For instance, the two competitors in the Defense Advanced Research Projects Agency (DARPA) Hypersonic Air-breathing Weapon Concept programme – a Raytheon-Northrop Grumman team and a Lockheed MartinAerojet Rocketdyne grouping – have said they could flight test their scramjet-powered hypersonic cruise missiles in 2020. DARPA’s Tactical Boost Glide programme plans to carry out test flights in 2020.

The agency’s Advanced Full-Range Engine, a conceptual dual-mode ramjet, is also expected to be tested in 2020. Companies competing to develop technologies for hypersonic missiles span the USA’s aerospace industry, though Lockheed is the leading winner of contracts so far. The company has said it expects to sign $3.5 billion-worth of hypersonic development contracts between 2019 and 2021. Other important players in the nascent industry include Aerojet Rocketdyne, Dynetics, Northrop and Raytheon. The DoD is also scrambling to find ways to counter hypersonic weapons. DARPA is working on a programme called Glide Breaker that is intended to intercept hypersonic weapons. In addition to anti-hypersonic missiles, the Pentagon is researching hypervelocity projectiles, laser guns and electronic warfare systems. It is thought by some that the best time to knock out hypersonic missiles is in the slower moving period right after launch. Boost-glide missiles might be intercepted during the boost phase, but the Pentagon does not expect the USA to have a defence against hypersonic missiles until the mid-2020s, at the earliest.