Obvious to casual observers and enthusiasts alike is the dramatic technological development trajectory of a century of aviation. But while enthusiasts attuned to very fine details may have more to say about recent developments, casual observers will legitimately note that aircraft are much the same as they have been for some decades – perhaps a bit quieter when passing overhead and seasoned travellers may prefer a 787 to a 747, but the big upside difference is in onboard food and movies; leaps in engine efficiency and aircraft weight pay dividends, but are mostly invisible.

The aerospace industry is on a plateau when it comes to hardware. Realistically available improvements in engine efficiency and weight are, it has been obvious for some time, very small. Yet while what is coming any time soon in aircraft technology may be marginal gains, aviation is nevertheless on the cusp of a transformation – thanks to electronics. Do not expect drama in 2020, but there is much cause to expect medium-term gains in fuel efficiency and on-time performance – this decade, certainly – from better avionics and air traffic control. In a 2030s timeframe, mastery of quantum effects should accelerate that revolution. 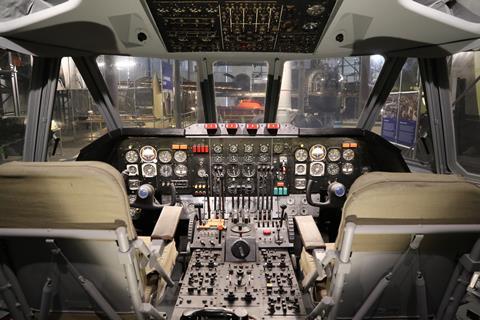 The context was illustrated in November by Peter Hitchcock, vice-president commercial avionics at Thales, while demonstrating progress on a next-generation flight management system (FMS). Thales promises its PureFlyt FMS will be a “game-changer” and available from 2024. Critically, says Hitchcock, the system’s power comes from exploiting a third revolution in avionics: connectivity – the first two revolutions having been the introduction of instruments to the cockpit and the move from analogue to digital. By enabling a “connected cockpit”, the PureFlyt ensemble of an all-new flight control computer and electronic flightbag should help pilots throughout a journey to command an evolving, optimal route to minimise delays and maximise fuel efficiency.

What will make this possible is vast quantities of incoming data about the entire air traffic environment – much of it accessed through the fully connected electronic flightbag to shield the flight control computer from insecure connections – along with aircraftspecific data such as weight, which changes with fuel burn. Armed with such a system, pilots should be better able to match their employers’ “strategic” flightplans, as loaded into electronic flightbags, with the “tactical” reality of man aging the flight through the secure FMS that actually controls the aircraft. Thales flight avionics vice-president Jean-Paul Ebanga stresses that connectivity is the only way to accommodate an expected doubling of the fleet by 2035, while bringing unmanned systems into civil airspace and respecting demands for emissions and noise control. 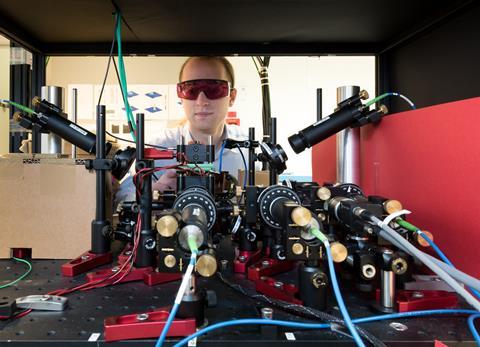 To fully benefit from a connectivity revolution, each aircraft must ultimately be a node in a fully networked system that includes next-generation air traffic control and even fleet and route management at airlines – two sectors attracting significant attention from various divisions of Thales. The short-term benefits of completing projects like PureFlyt and the US NextGen and European SESAR air traffic control overhauls could, reckons Thales, cut fuel burn by 3-4%. But a visit to an intensive cluster of research laboratories at Université Paris-Saclay, southwest of the capital, gives a tantalising insight into a more distant future.

A long-time focal point of French research in quantum physics, nanoscience and artificial intelligence, the Saclay campus hosts some 30,000 researchers – many working for Thales and other big-name technology companies and partnering with academic colleagues. Rather than product-focused research and development (R&D), these people are mostly engaged in pure science – attempting, in the tentative, iterative way of laboratory research, to unlock the physical mysteries of phenomena like superconductivity. RADICAL CHANGE One day, perhaps, some of that work may give R&D colleagues some technological traction in realising futuristic devices.

Think quantum antenna, which may replace meters-long wires with chips the size of a thumbnail, or inertial navigation devices that measure the torque on a few thousand suspended gas atoms, potentially improving accuracy by orders of magnitude over existing systems. Thales spends more than 12% of its development budget on pure science, which sounds expensive. But the alternative – leaving pure research to rivals who are heavily invested, too – may be far more costly.

Chief technology officer Marko Erman says he expects perhaps two-thirds of Thales’s business to be affected if an impending “quantum revolution” opens technology horizons far beyond the quantum-enabled devices we know today – like lasers or the atomic clocks that underpin satellite navigation. Back in his product-oriented part of the organisation, Ebanga explains the Thales mindset. In an ever-more integrated aerospace environment, he says, it is hard to forecast the future relationship between Thales and its airline and airframer customers – but if we work for the benefit of the end-user and the industry, it’s a “win-win”. Consider, he says, the onceunimagined benefits that have flowed from smartphones; by taking a collaborative approach, we “unleash a growth potential”. And that, he says, will be critical. Rising demand and environmental issues mean the industry “has no choice but to find solutions”. And, he stresses, these cannot be marginal improvements – what we need is a “technology shift”.