My journey to becoming an air traffic controller at London Biggin Hill airport began when I was 13. I joined the RAF Air Training Corps, staying with them for eight years. That was where my love for aviation was born. When I later saw an advert for a role at my local airport for an air traffic control assistant, I took the opportunity. I was in that role for seven years, and the airport kindly offered to help fund my studies.

To get to where I am now, I completed five months’ study at an aviation training college in Gloucestershire, where you learn the theory behind air traffic control and complete a certain number of hours on a very realistic 3D simulator.  I’ve now started on-the-job training with a mentor at London Biggin Hill, where I’ll build up hours to become solo controller.

The first time I interacted with a pilot and aircraft in a live situation was a real highlight for me. I don’t think I’ll ever forget that experience or the nerves that came with it. I could tell you the type, registration and destination right now! 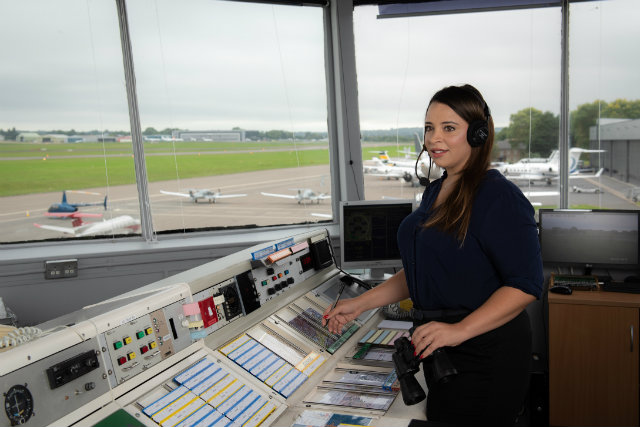 As an air traffic controller I use surveillance technology to track planes "en route" to London Biggin Hill and keep in touch with pilots. With the wide variety of business, leisure and heritage aircraft that fly in and out of the airport every day, it’s a real balancing act – especially because there aren’t any slot restrictions, meaning there are no set daily flight arrivals or departures.

Each day I arrive at the control tower and check for any notices and weather reports, or any closures to parts of the aerodrome. I will then receive a handover from a controller who is already plugged in, telling me what the current traffic situation is. Once I agree to the handover, my mentor and I take over from where the last controller left off. Controllers can only legally work for a maximum of two hours at a time before having a break, to prevent fatigue. In these breaks I receive a debrief on my performance, study manuals and enjoy a well-earned coffee.

What do you enjoy most?

No two days are the same, and I love that London Biggin Hill’s air traffic varies so much, from light aircraft to private jets, helicopters and even Spitfires. There are very few airports left in the country that serve such a variety of aircraft, and as a controller it really does make you think on your feet. The annual Festival of Flight airshow in August is also every plane spotter’s dream.

I’m one of those lucky people who wakes up to a job they love every day, but I would say the toughest element of it is being a shift worker, when most of my friends and family work Monday to Friday jobs. I have to try just that bit harder to make my social and home life fit in around my job.

Where do you see yourself five years from now?

I’d like to continue my career progression and work towards one day becoming a Senior Air Traffic Controller. I was inspired by the example of women like Yvonne Sintes, the first female air traffic controller, and I’d like to give something back, encouraging more young people to consider STEM [science, technology engineering and maths] subjects and a career in air traffic control.