The arrival of the unmanned air vehicle (UAV) as a potent battleground tool is arguably the most notable legacy of the 9/11 terror attacks for aerial warfare. “While the UAV had been around for a long time, Afghanistan especially, and Iraq to a lesser extent, provided the development impetus to take them out of a niche capacity to what is now seen as an essential element of credible military capability,” according to Doug Barrie, senior fellow for military aerospace at independent defence think tank the International Institute for Strategic Studies. 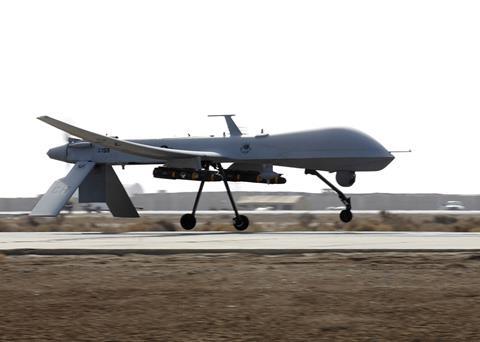 From the onset of the US-led coalition invasion of Afghanistan on 7 October 2001, UAVs were deployed, initially for intelligence gathering and reconnaissance, but swiftly moving into use as platforms for attacking ground targets. The black-and-white, crosshair images taken from General Atomics Aeronautical Systems MQ-1 Predator UAVs, tracking a Lockheed Martin AGM-114 Hellfire missile as it zeroed in on an insurgency target became an enduring image of the war.

The success of armed UAVs during these conflicts did have consequences for their global proliferation and bolstered and facilitated Chinese ambitions in this field, explains Barrie. “The US has traditionally been restrictive on who they will sell armed UAVs to, with countries such as the UK and France on the approved list. But US export policy in the past blocked sales to various countries in the Middle East and the Gulf so many turned to China, which has an increasingly large footprint in military UAVs. China was inadvertently provided with an opportunity to enter this arena, and it has taken it up.”

While the development of UAVs continues at pace, the focus for air forces has in recent years turned back also to classic fighter aircraft development as the threat changes once again, says Barrie. Prior to 9/11, as the Cold War thawed, defence spending was on a downward trend. “Obviously 9/11 brought that to a halt, but it was a new type of threat – a non-state actor,” he explains.

“With the War on Terror being waged on a counter-insurgency basis this drove the industrial footprint of air power in a certain direction,” he says. Apart from the danger of ground launched missiles, coalition aircraft operated in permissive airspace where there was no threat from enemy action. “This diverted air forces away from their traditional high-end, peer-to-peer combat capabilities, and there were suggestions in the mid-2000s that there would not be a need for top-end fighter programmes post-Eurofighter Typhoon or post- [Lockheed Martin] F-35,” says Barrie.

However, deteriorating relations with Russia and the rise of Chinese air power means the threat and therefore the aircraft development cycle has moved from a “permissive air environment to a contested air environment”, says Barrie. This has led to a new generation of fighter aircraft development programmes such as the US Next Generation Air Dominance and the UK’s Tempest. These seemed a distant prospect in the years soon after 9/11.