Will 2020 be the year the Lockheed Martin F-35 Lightning II crosses the finish line? Despite a falling price tag and eight years of continuous aircraft deliveries, the F-35 has struggled to emerge from its engineering, manufacturing and development stage.

The US Department of Defense (DoD) announced in October 2019 that the programme’s coveted Milestone C decision – a bureaucratic decree needed before full-rate production – would be delayed by up to 13 months. The latest snag? The F-35 Joint Program Office (JPO) is in a legal dispute with Lockheed over ownership of certain algorithms needed to build a combat simulator for the F-35, called the Joint Simulation Environment. 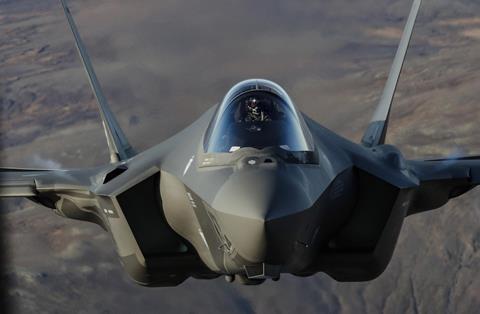 A Milestone C decision is significant for Lockheed because it would clear the way for a multi-year contract, a discounted bulk buy that saves taxpayers money and gives the manufacturer a cancellation payment if aircraft are not bought as promised. It would also be a mark of approval from the Pentagon, a rare gold star for a programme plagued with demerits and delays (Lockheed was at one time supposed to produce 2,000 aircraft by 2019, but instead will only have finished about 500).

In fact, the F-35 saga is far from over. The USA’s adversaries have taken note of the stealth aircraft, found weaknesses and developed counter weapons. To stay ahead of those challengers, in particular China and Russia, the USA and allies are ploughing $10.5 billion into an aircraft modernisation effort called Block 4. Modernised F-35s will receive new electronic warfare and missile launch capabilities. New open-systems architecture will prepare the aircraft for plug-and-play future upgrades. A more powerful computer processor will help the fighter control the US Air Force’s next big thing: so-called loyal wingman unmanned air vehicles.

Upgrades will include the potentially life-saving Automatic Ground Collision Avoidance System and the ability to carry 2,270 litre (600USgal) external fuel tanks, which are needed to put host aircraft carriers beyond the reach of China and Russia’s missiles, will be added. All of those capabilities – and more – will be developed and tested in six-month development cycles, a Silicon Valley process called “agile”. The agile method is meant to chunk work into small pieces, but the Pentagon’s top weapons tester argues that Lockheed has bitten off more than it can chew. It calls the approach “high risk due to the large amount of planned capabilities to be delivered”. Then there is Lockheed’s Autonomic Logistics Information System (ALIS), the airframer’s do-it-all IT backbone that handles operations, training, maintenance and the supply chain.

“One air force unit estimated that it is spending the equivalent of more than 45,000h per year performing additional tasks and manual workarounds… because ALIS is not functioning as intended,” says the US Government Accountability Office. Still, the JPO foresees “significant progress” by September 2020 after software fixes, upgrades and the migration of parts of the system to the cloud. Improvements to ALIS and stabilising production could help the F-35 meet the DoD’s 80% mission capability rate goal in 2020. The programme fell short, with a 73% rate in 2019. The steep operating cost – about $44,000/h for the F-35A – could also fall in 2020 if the Pentagon takes up a five-year maintenance contract proposed by Lockheed. As part of the deal, the manufacturer promises to absorb costs above $25,000/h.

Despite persistent problems, the aircraft’s stealth capabilities and sensor payload, as well as declining price tag, have helped it emerge over the past several years as the world’s best-selling fighter. Lockheed will be looking to sweep aside the bulk of the aircraft’s problems in 2020 so that it can seize on purchase interest from Canada, Norway, Poland, Switzerland and other allies.