Sergio Aguirre is president of Gogo’s Business Aviation division, where he is focused on driving down the cost of in-flight broadband while increasing capacity and speed for its expanding customer base

One of my earliest memories is as a very young child in 1967 when my father took me to the El Monte, California airport to watch aircraft take off and land. He passed away when I was young but to this day I often think of him and those special moments we had together when I see aircraft taking off. After high school, I decided to join the military and of course I picked the US Air Force (USAF). It was breathtaking to drive down the flight-line seeing all the General Dynamics F-111s lined up at Mountain Home AFB. I remember thinking about how much my dad would have loved to see the fighters taking off at dusk with their loud and long blue afterburner flames.

After the USAF, I went to work for Gulfstream in Long Beach for about eight years. I loved and learned so much. At that time, Allen Paulson, founder of Gulfstream, was still involved, and in many ways it felt like a small family business where people who worked hard were given the opportunity to learn and contribute as much as their capabilities and desires would carry them. I learned much about specifications and building aircraft interiors, certification, heavy maintenance and – probably of most value today, I started my journey of learning everything I could about the business side of business aviation. 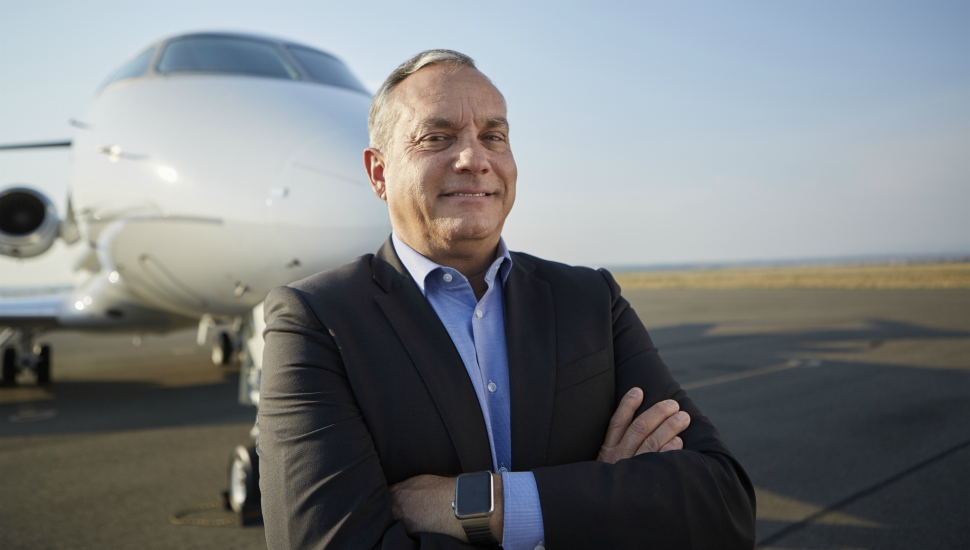 In 1996, I moved to in-flight entertainment and connectivity (IFEC) company Airshow, joining some of the greatest sales people I’ve ever had the privilege of working with and learning from. It was an exciting time of exponential growth as we pushed the technology envelope – specifically with in-flight connectivity (IFC) and live broadcast digital TV. Although we were right on the money addressing market needs, in retrospect the IFEC technology needed to mature before it could become mainstream. It was during my time at Airshow when I realised how much I loved being part of a small tight-knit team focused on building and growing a business.

A few years later, I ran into an old acquaintance who worked for his family’s business, Securaplane. I remember admiring the passion they had and how hard they worked at building and being the best they could be. A few weeks later, I decided that I had so much fun being a part of Airshow’s phenomenal growth that I wanted to ride the rollercoaster again, so I joined Securaplane in January 2001. During my time there, I got a lot more involved in helping run the company day to day. I learned so much about being entrepreneurial: taking risks, helping people achieve more than they thought possible, and about cash-flow management. Securaplane also experienced fairy-tale level growth during the years I had the honour of working with that incredible team.

Being a part of the Gulfstream team that cut the new aircraft completion cycle from 36 to 12 weeks was a big one. Secondly, going to Washington DC shortly after 9/11 to advise on business aviation operations and security, and finally, seeing Gogo’s successful initial public offering.

I currently serve as the president for Gogo’s Business Aviation division. In this role, I oversee the success and overall direction of the division with all functions reporting to me.

How is the connectivity market evolving and how is Gogo helping to advance this sector?

IFC is no longer just a tool for working. Today, just like it is on the ground, IFC is integral to all parts of our lives, including work, play or leisure online activity. It’s expected.

Gogo successfully democratised broadband connectivity in business aviation. Before Gogo, only the largest flight departments with the biggest budgets could afford IFC. Today, it’s a reasonably priced option on everything from a Pilatus PC-12 single-engined turboprop to a Bombardier Global 7500 ultra-long-range business jet.

Driving down the cost while increasing capacity. Customers do not understand why they cannot get the same capacity and speed in their aircraft for the same price they pay at home or the office.

Where do you see this market in 10 years?

Gogo is focused and obsessed with solving the IFC challenges. The day is coming when IFC speed and performance will be similar to that in your home or office.

It’s hard to say what that level of connectivity might enable. I think it’s safe to say that 10 years ago nobody expected to see the kinds of applications and activity we’re seeing online today. The likes of Netflix and Uber companies didn’t even exist and look where they are today and what they are delivering.

One thing we do know is that we’ll see artificial intelligence hitting the mainstream by then, and we’ll see flight operations, safety and every aspect of aviation being impacted by it. We’ll see the full proliferation of the internet of things impacting aviation heavily and that will only help all operations improve.