The US Department of Defense (DoD) is moving forward with a plan to build and fund a consortium of universities to boost its hypersonic missile development efforts and train a new generation of scientists and engineers in the field. In its push to catch up with China and Russia, the Pentagon is spending $2.6 billion in fiscal year 2020 on hypersonic missile research and development and wants to spend $3.2 billion in FY2021. 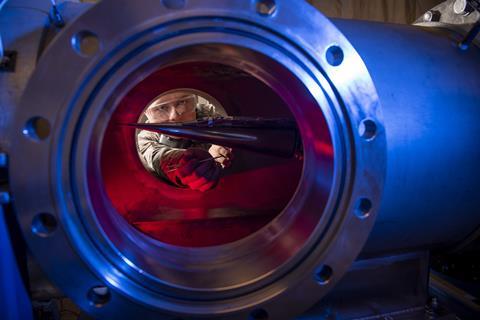 Hypersonic windtunnel at the US Air Force Academy

Yet, despite the recent boost in funding, the DoD believes the US aerospace industrial base is suffering from a shortage of professionals with experience designing and building hypersonic weapons. This has resulted from funding cuts that took place 30 years ago at the end of the Cold War, which discouraged people from studying the technology, says Mike White, assistant director of hypersonics for the DoD.

“A couple of the contractors, when we first started accelerating [hypersonic missile development], made comments: ‘Hey, I’m looking to immediately hire 600 experts in hypersonics,’” says White. “My response was: ‘There aren’t 600 experts.’”

The DoD is aiming to partly backfill the industry’s ranks with its National Consortium for Applied Hypersonics. The programme was kicked off with a request for information issued in December 2019. The Pentagon is still in the process of structuring the association, but expects to have it launched before the end of 2020.

Initially, the consortium has been allocated $20 million from the FY2020 budget. The DoD has not decided which academic institutions will participate in the programme, but says it has received responses to its request for information from more than 45 universities from across the USA, as well as some internationally. Universities in the countries allied with the USA through the Five Eyes group – Australia, Canada, New Zealand and the UK – are also allowed to participate.

“The goal is to set up an environment where university researchers can evaluate and develop technologies relevant to future capabilities envisioned for our hypersonic systems,” says White. “They will not be working on specific programmes per se, but they will be working on technologies and concepts that, if successful, may one day find their way into future builds of specific hypersonic systems.”

The Pentagon is still in the process of defining specific problems for the university consortium to tackle. “Our goal is two-fold: one: develop relevant, high-payoff technologies; and two: inspire and accelerate the learning of our next-generation workforce,” says White. Particular areas that universities might be well suited to address include applied aerodynamics and system design, energetics, guidance and control, high-temperature materials, lethality and propulsion, as well as phenomenologies and signatures, he says.

Still, there is only so much knowledge the DoD can pull from the USA’s universities. The Pentagon is also looking at ways to leverage talent in the conventional missile manufacturing industry base. “Our hypersonics brain trust is really operating in an R&D environment,” says White. “[But] we need people who are trained and have expertise in developing weapon systems and missiles.”

White says the USA’s workforce can also be retrained to develop hypersonic missiles. “We’re pulling people into the hypersonic community, and then getting them educated on the subtleties and considerations necessary to operate in a hypersonic environment,” he says. “If I have somebody that’s used to building a THAAD missile, that’s talent that I absolutely have to have in order for me to field effective hypersonic weapons. That person knows how to build a weapon system and a missile system.”