Russia’s move to re-register hundreds of foreign-owned aircraft in the light of sanctions imposed as a result of its invasion of Ukraine has prompted a safety backlash from European regulators.

To date, Russian authorities have transferred 571 Western-built passenger aircraft to the domestic register, out of a total of 781, according to First Deputy Prime Minister Andrei Belousov. 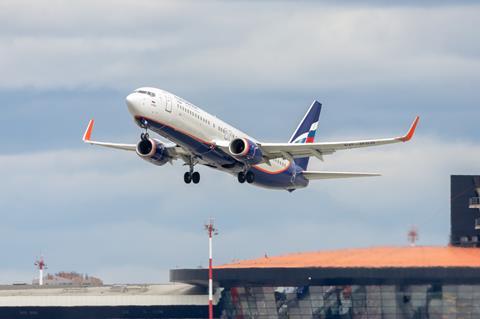 Aeroflot-operated 737 has since been re-registered as RA-73117

Belousov disclosed the figure during a presentation on measures adopted by the government to stabilise the Russian economy in the face of sanctions pressure.

“The aircraft fleet of Russian airlines has been preserved and their safe operation arranged,” he told the Federation Council on 13 April.

Airlines in Russia had been using hundreds of aircraft assigned to the Bermudan and Irish registries, and the two overseas aviation authorities have safety oversight responsibility for these fleets.

Re-registration without their owners’ consent is a breach of ICAO standards and both the Bermudan and Irish authorities have withdrawn the certificates of airworthiness for the aircraft operated by Russian carriers.

Stabilising the transport system and organising new logistics corridors, Belousov says, are among the government’s priorities.

The transport network has received a “double impact”, he says, from restrictions resulting from international sanctions and a “dramatic” change in the directional flow of goods.

Russian airlines will be subsidised by the government, says Belousov, receiving up to Rb110 billion ($1.3 billion) to support their operations.

These subsidies will be distributed in accordance with the number of passengers transported and the distances involved.

Some Rb27.5 billion will be allocated to ensuring connections are maintained in the eastern regions of Russia, as well as Crimea and Kaliningrad. Another Rb19.5 billion will be set aside to refund passengers for cancelled flights.

Belousov says the air transport measures are being taken to “ensure operation of airlines” and the conveyance of passengers over the summer and autumn seasons.

But European regulators have expressed doubts over Russia’s ability to exercise sufficient safety oversight of the aircraft.

The European Commission has detailed its reasons for blacklisting 21 airlines over their continued operation of hundreds of those aircraft.

In documentation accompanying the blacklist, the Commission states that Russian air transport regulator Rosaviatsia has assumed oversight functions “without any co-ordination” with its Bermudan and Irish counterparts.

“There is no verifiable evidence to conclude that [Rosaviatsia] has developed the necessary safety oversight capacity to adequately perform such an extended oversight responsibility on such short notice, and over such an extensive number of aircraft,” it adds.

Rosaviatsia had previously stated that it had granted extended certification to a number of maintenance organisations to broaden their capabilities to include additional Airbus and Boeing models.

Such action is “in breach” of the Chicago Convention article which states that aircraft cannot be validly registered in more than one country, the Commission documentation says.

“As a result of the applicable restrictive measures, engineering and technical support to [Russian airlines] has become limited,” it adds.

“Lack of this engineering and technical support, coupled with the increased surveillance activity stemming from the addition of the significant number of new aircraft on the Russian registry, will increase [Rosaviatsia’s] workload and the need for expertise.”

It says this is “unlikely to be immediately achievable” given the sanctions situation and the fact that oversight activity has previously been conducted through bilateral agreements that handed the duties to Bermuda and Ireland.

European transport commissioner Adina Valean says Rosaviatsia has “allowed” airlines in the country to operate “hundreds” of foreign-owned aircraft without official safety approval. “The Russian airlines concerned have knowingly done so in breach of relevant international safety standards,” she adds.

The Commission’s documentation also points out that there is an operational impact from Russian carriers’ having only limited access to updates of navigation and ground-proximity warning system databases.

It warns that this lack of access risks “seriously impairing the safe navigation abilities” of aircraft certified by Rosaviatsia and operated by Russian airlines.

Rosaviatsia had previously been informed by the Commission of its concerns regarding aviation safety oversight, and the potential for airlines being blacklisted, and was given the opportunity to use its right of defence by testifying before the EU’s air safety committee.

But Rosaviatsia told the Commission on 31 March that it rejected the allegations over safety performance of the airlines it oversees, and that it believes it upholds in full its responsibilities under ICAO.

The Commission says, however, that Rosaviatsia “did not… provide any evidence or information” to support its statements and “did not demonstrate” how it discharges its responsibilities for regulatory duties under the Chicago Convention.

Given the “absence of willingness” from Rosaviatsia to co-operate with the Commission and EU governments, and its demonstration of “serious safety deficiencies” by allowing flights to take place “in breach of relevant international safety standards”, the Commission has added the Russian operators – which include several major airlines, among them Aeroflot, S7 Airlines, Ural Airlines and Utair – to its blacklist.

Nonetheless, Rosaviatsia insists the country’s foreign-owned fleet will be safely operated. It says the Commission’s unilateral measure was “taken in absentia” and does not consider the actual technical condition of the leased aircraft fleet or the maintenance programmes applied to them.

It states that the airlines on the blacklist have all the necessary documentation, and that all aircraft comply with airworthiness standards, undergoing regular maintenance within the set time limits.

While the Commission states that the blacklisting relates solely to safety, and is apolitical in nature, Rosaviatsia argues that it reinforces the economic “blockade” on the Russian air transport sector, and complains that the sanctions are violating the Chicago Convention.

The Commission’s decision will “not affect the safety” of Russian carriers, says Rosaviatsia, and will “inevitably” lead to “retaliatory measures” from aviation authorities.

“Airworthiness certificates for aircraft are issued [by Rosaviatsia] in accordance with federal aviation regulations and documents individually drawn up for each aircraft, certifying its ability to safely fly and technically operate,” it adds.

“Safe aircraft operation is the main priority of the Russian aviation authorities. Approval of airworthiness certificates is carried out in strict accordance with the norms of international and national air laws.”

Russian carriers were already barred from operating within the EU as part of the sanctions measures imposed over the Ukraine conflict.

Valean stresses that the blacklisting is “not another sanction” against Russia, because it is being taken purely on safety grounds.

“All EU air safety list decisions are based on facts and on safety considerations only,” says the Commission.

“We do not mix safety with politics. The situation will continue to be closely monitored in the coming weeks and months, and, if necessary, further action may be taken.”