The lighter side of Flight InternationalL

Leahy’s late verdict on A380

We take our hats off to Andreas Spaeth, who has managed to pin down an interview with former Airbus sales supremo John Leahy for his new book on the A380.

Leahy – rarely out of the headlines during his long stint in Toulouse – has kept a low profile since his retirement in 2018 and move to Miami.

Not too big to fail

A champion of the superjumbo, who at least once persuaded his board colleagues to offer the largest ever airliner a stay of execution, Leahy says certain customers and the engine manufacturers contributed to its commercial failure.

Operators including Singapore Airlines “interfered with the design,” he tells Spaeth. “Too much weight was built into the airplane”, based on the premise that Airbus would launch a stretched A380-900.

“That was clearly a design mistake that we made,” he says.

He adds that Airbus was “blindsided” by the engine manufacturers, who promised that it would be 10 years before new powerplants offered a step-change in efficiency.

However, three years after the A380’s launch in 2000, the Boeing 787 was launched with GE Aviation and Rolls-Royce powerplants offering a 12% improvement on the A380’s engines. “Can you imagine the success of the A380 if it had 12% better fuel burn?” asks Leahy, ruefully.

Unfortunately, non-German speakers will have to wait until towards the end of the year for an English version of the book, whose sub-title translates as “the last giant”.

With 224 pages in the German edition, the 1kg coffee table tome is a genuine heavyweight, just like its subject.

The North American P-51 Mustang was a scourge of the Luftwaffe in the Second World War. Now, the first serial example of a German-designed 70% scale replica of the type has flown for the first time.

ScaleWings says its SW-51 is a near-perfect copy of the iconic fighter, down to the hand-riveted finish, and a modernised version of the 1940s cockpit. However, although the structure looks like the polished aluminium of the original, it is in fact 100% composite.

Aircraft 001 completed a 35min sortie from Mlada Boleslav airport in the Czech Republic on 20 May. It followed a flight of a proof of concept version seven years ago. 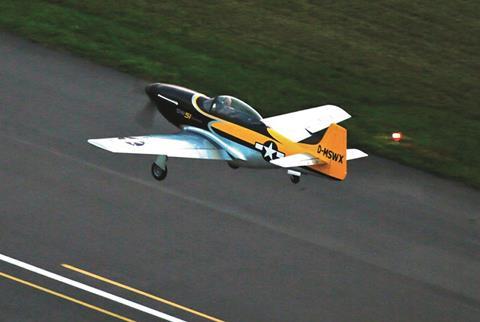 Back to the future

Since then ScaleWings has been working on industrialising the programme at a plant in Poland, capable of producing 60 examples a year, and pitching the Rotax-powered ultralight to the leisure and aerobatic markets. It is priced at up to €300,000 ($355,000). The SW-51 is also available in kit form.

The Bavarian company is also looking for investors to launch the aircraft stateside this year, with the rallying call: “Let’s bring the Mustang home to the US!”.

An invite from the group Sustainable Aviation to the launch of the UK aviation sector’s first decarbonisation targets notes that “since making its net zero pledge in February 2020, the UK aviation industry has continued to make exciting progress towards decarbonising aviation”.

Presumably, the fact that much of its fleet has been sitting idle since March 2020 has helped.

Lufthansa plans to bring five of its furloughed Airbus A340-600s back into service, citing expected buoyant demand for first-class and other seats on long-haul routes from Munich next year.

The German carrier retired the quadjets from service at the start of the pandemic, saying it was highly unlikely they would make a return.

Should we call that a lack of four-sight?

Visitors to the new offices of aviation group Avia Solutions in Vilnius, Lithuania will spot an interesting feature in its entrance hall – a Bombardier CRJ200. 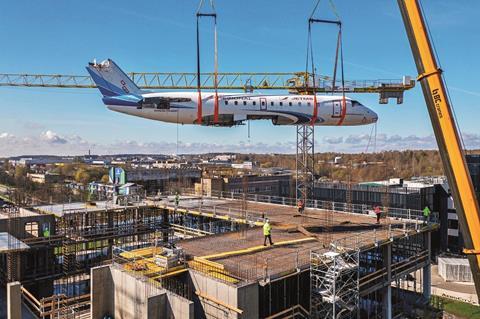 The decommissioned regional jet was lowered by crane into in the atrium of the eight-floor complex, during its construction, by Avia’s maintenance, repair and overhaul subsidiary JET MS. It might give rise to a local riddle: what building is square, but has two wings?