Anyone looking for an adventure in space and time could have done worse than join the press conference that was hosted by Ukrainian aviation bureau Antonov on 9 September.

Its event in Kiev coincided with the 100th anniversary of the founding of a company that became the Antonov plant.

The ‘time’ part came from the unveiling of a new range of wristwatches, produced under the Kleynod brand in co-operation with the aircraft firm. But to take care of the ‘space’ bit, Antonov held the conference in the cavernous freight hold of its legendary An-225, the world’s largest operational aircraft.

Video records of the gathering indicate that social distancing was easily managed within the empty 6.8m-wide cargo bay – hardly a surprise, given that the colossal six-engined jet, designed to shoulder the Soviet ‘Buran’ shuttle, has a payload capability of 250t.

The predictions of Mystic Michael

Some of the early predictions about the impact on the industry of Covid-19 proved to be hopelessly wide of the mark – almost on a Trumpian scale – including this one from “Mystic” Michael O’Leary, at the A4E conference in Brussels in early March.

Ryanair, said its chief executive, did not expect the effects to last through the summer, and the crisis might all be over a lot earlier. Demand would dip for roughly three weeks and “then people will get bored with coronavirus”, he suggested. A few weeks later, the Irish carrier grounded its entire fleet.

Mind you, his fellow airline boss Willie Walsh’s crystal ball was not exactly in full working order either. The since-retired IAG chief executive dismissed the notion that aircraft could be grounded across the globe as happened after 9/11, and forecast that any downturn in traffic “will stabilise in the coming weeks”.

The only surviving prototype of the twin-turboprop airliner that represented Indonesia’s ambition to join the elite of aircraft-manufacturing nations in the 1990s – the IPTN N250 – has been handed over to the Mandala Aerospace Central Museum in Yogyakarta.

The N250 was an ambitious development and an icon to many Indonesians. Part of the drive by the region’s “Tiger” economies to develop high-tech, competitive industries in the late 20th century, the project was killed by the Asian financial crisis. In 1998, the company told Flight International that, with the bankrupt government having withdrawn support, the programme needed overseas funding to survive. 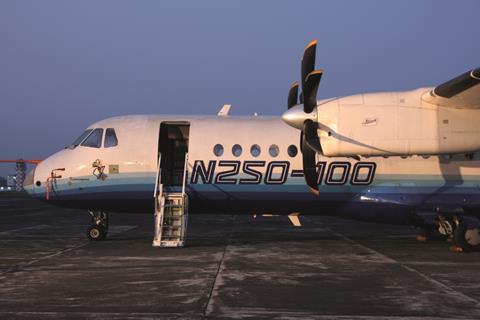 Indonesia’s twin-turboprop will be a museum piece

The original 50-seat N250 was announced at the 1989 Paris air show and rolled out in November 1994. It flew for the first time on 10 August the following year, an event of such importance to the nation it was named National Technology Revival Day. A 70-seat stretch followed, and the aircraft was to have been the springboard to a 100-seat passenger jet, the N2130.

“Corporate purpose as a moral compass in the crisis: Thales has defined its purpose as ‘building a future we can all trust’. It is a statement that took six months to write, six months of consultations with almost 50% of the Group’s 83,000 employees about our motivations and about the needs of society today and tomorrow. It’s the exact transcription of the DNA that has shaped the Group since it was founded more than a century ago. It is crucial for our customers – the people behind the infrastructure that forms the nervous system of our societies – to share and support this vision. We only succeed if our customers succeed. Is our purpose ambitious? Yes, it’s tremendously ambitious. And we need to show humility because Thales does not claim to be the be-all and end-all of trust.”

More than 200 skeletons of mammoths have been found at an airport construction site near Mexico City. Sadly, it is not the only airport these days where plenty remains of jumbos from another era can be found.