Virgin Orbit takes heart despite failure of Start Me Up mission

In the end, after all the hype and excitement surrounding the UK’s first satellite launch, the event turned out to be the proverbial damp squib.

Despite a successful deployment from its carrier aircraft – a modified Boeing 747-400 (N744VG) – the LauncherOne rocket did not reach orbit, instead falling back to earth along with its satellite payload. 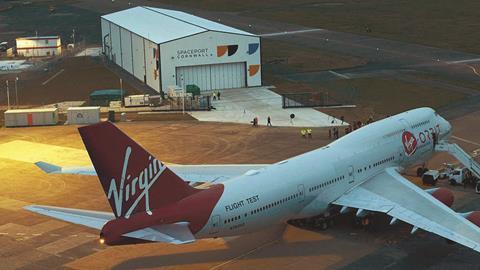 Operator is confident in future for Newquay-located Spaceport Cornwall

Investigations are now being conducted by both the launch operator, Virgin Orbit, and the UK’s newly constituted Space Accident Investigation Authority, which will probe the incident in co-operation with the US Federal Aviation Administration (FAA).

It had all started so well, however. The 747-400, named ‘Cosmic Girl’, had departed the southwest UK’s Newquay airport, which has been designated as Spaceport Cornwall for satellite launch activity, at about 22:00 on 9 January.

It flew west at around 30,000ft to a specified airspace zone southwest of Ireland for the drop, which took place about 70min after take-off.

“Initial data assessments indicate that the first stage of the rocket performed as expected,” it says.

The vehicle reached space altitude and underwent first-stage separation, fairing separation, and second-stage ignition. But at an altitude of around 180km the second stage “experienced an anomaly”, Virgin Orbit says, which prematurely ended its initial engine burn.

The craft failed to reach its intended orbit and the launch vehicle, along with its satellite payload, fell back to Earth.

It was attempting to place satellites into orbit on behalf of seven customers as part of a mission dubbed ‘Start Me Up’.

“Extensive telemetry coverage for the flight allowed for the collection of an enormous quantity of data during the mission,” Virgin Orbit adds. This has enabled rapid analysis of the event.

“An extensive fault analysis and investigation of all required corrective actions identified during the investigation will be completed prior to the next flight,” it says, pointing out that, before the UK mission, each of its customer satellites had reached their required orbit.

Chief executive Dan Hart adds that he is “confident” that the root cause will be determined in an “efficient and timely manner”, given Virgin Orbit’s previous successful launches using the vehicle and the quantity of telemetry it obtained from the UK flight.

“We are continuing to process and test our next vehicle per our plan and will implement any required modifications prior to our next launch,” he says.

Virgin Orbit is to conduct its next space launch from California’s Mojave Spaceport, but says that it expects to return to Spaceport Cornwall and is holding discussions on potential opportunities which could emerge later this year.

But the launch failure has led to an early task for the UK’s new Space Accident Investigation Authority.

With the new launch capabilities being introduced in the UK, the Air Accidents Investigation Branch (AAIB) was designated as the Space Accident Investigation Authority in 2021.

Inspectors from the AAIB had been attending the launch from Spaceport Cornwall as observers.

While the Space Accident Investigation Authority is independent of the UK Civil Aviation Authority, the regulator will act as an adviser as investigators work with the FAA to oversee Virgin Orbit’s inquiry. “The aim will be to ensure any relevant safety lessons are learnt,” it adds.

And despite the mission not achieving its aims, many in the UK’s fledgling space industry are keen to take positives from the mishap. “While this result is disappointing, launching a spacecraft always carries significant risks,” says UK Space Agency director of commercial spaceflight Matt Archer.

But both the agency and Virgin Orbit stress that the flight demonstrated that launch capability from the UK is possible, and that Spaceport Cornwall has potential.