The Pentagon’s interest in attritable unmanned air vehicles (UAVs), via experiments such as the Dynetics X-61A Gremlins and Kratos XQ-58 Valkyrie, has aerospace manufacturers rethinking their lucrative MRO and upgrade business lines.

Because attritable aircraft are designed to be limited-use, and cheap enough to be lost in combat or thrown-away when obsolete, the traditional model of capturing long-term business government via vendor lock – selling proprietary aircraft to the US Department of Defense and then making profits on MRO and upgrades – could be disrupted. 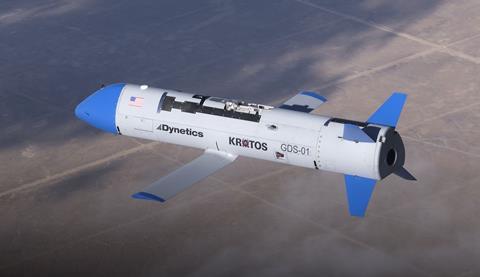 While attritable aircraft won’t totally replace manned aircraft in the near term – or perhaps ever – some aerospace manufacturers are getting ready for the impacts of the new UAVs.

“If you’re focused on MRO and depots that would be a losing proposition,” says Chris Pehrson, vice-president of strategic development for Department of Defense customers with General Atomics. “But if you’re the one that’s focused on cutting-edge capabilities and doing that rapid refresh then you could win.”

For example, General Atomics is spending internal research and development funds to develop a new attritable jet-powered UAV called SparrowHawk, that could be air-launched from and air-recoverable by the MQ-9, the company told FlightGlobal in November 2019. The aircraft is not intended for any specific USAF programme of record.

Central to staying ahead of the competition in a possible era of attritable aircraft is developing, building and owning a few key business lines, for example, vehicle design, airframe final assembly and integration of software and hardware, say aerospace manufacturers. The rest can be contracted to whatever third-party vendor has the best technology for the job.

Aerospace firms say it is important to make attritable aircraft that are modular and have open systems architecture to enable this business strategy. Such designs make it easy for third parties to plug and play their top-of-the-line hardware or software, enhancing the value of an airframe beyond what a prime manufacturer could do on its own. Modularity also makes it easy to replace broken parts.

That’s the thinking behind the US Air Force Research Laboratory’s Kratos Defense and Security Solutions XQ-58A Valkyrie, which has a modular nose cone and front midsection, as well as plug and play interfaces, to allow sensor hardware to be quickly swapped in and out.

“We want to build the airframe, integrate the engine, but be very open to incorporating best-in-class, technology and mission systems from whoever,” says Steve Fendley, president of Kratos’s unmanned systems division. “Let’s maximise the utility of the system and not try to force a cookie cutter solution down the customer’s throat.”

The USAF’s move toward attritable aircraft is compounded by its interest in adopting aerospace rapid prototyping technologies as well as innovations, as well as hardware and software innovation from the world of Silicon Valley.

“I would like to get back to where we do things more experimentally, more prototyped-based,” said Will Roper, assistant secretary of the USAF for acquisition, technology and logistics at the 2019 Paris air show. “Go into production at some level, but always with the forethought that production is not going to last because we are going to leapfrog it.”

Advanced manufacturing tools, including 3-D printing, model-based engineering and agile software processes, are making it easier than ever to design new aircraft, says Roper. What’s more, the rapid pace of computer hardware and software innovation in the civilian sector could allow the USAF to continually upgrade the capabilities of its aircraft.

Roper talks of returning to the rapid development cycles of the X-planes and Century Series fighters of the 1950s.

“The whole purpose of those programmes was to get a technology into a plane, fly it and learn,” he says. “And occasionally, we thought that we had hit a plateau in development [and that’s] where we purchased.”

In addition to the USAF’s attritable aircraft programmes, Roper has proposed a “Digital Century Series” of manned fighter aircraft that would be developed in five-year increments using the latest in advanced manufacturing.

The USAF believes that the only way to shift the US defence industry into experimentation mode is to move funds away from maintaining old aircraft and into research and development.

“The thing I’d like to see as a big business change is a high growth in prototyping programmes with the Air Force, where there is a huge [financial] incentive to be a designed-focused company,” says Roper.

The key to succeeding in this brave new world of experimentation and limited-use UAVs will be figuring out the lifecycle costs of individual aircraft structures, systems and software, say aerospace manufacturers.

“If [you] knew the answers to that you could be hugely successful at this business,” says Pehrson of General Atomics.

Avionics, satellite communications hardware, and analytics software, are likely to be rapidly improved in the coming years, he says. Aerospace manufacturers must be ready to swap out the technology and shouldn’t expect follow-on MRO work.

“Trying to repair a vehicle structure, for example, the wing box, fuselage, or empennage, is probably going to cost more than what it is worth. If the structure is modular, like in the wing, fuselage nosecone, or empennage, there may be a case for just those parts to be replaced,” says Scott Wierzbanowski, programme manager for the Defense Advanced Research Projects Agency’s X-61 Gremlins programme. “Upgrades to the air vehicle itself, including the structural, outer mold line changes, and aero performance, would most likely occur with the next lot of vehicles purchased.”

Attritable UAVs could even spur a new market for salvaged parts.

“Assuming that one can build the attritable air vehicle cheaply enough, the intent would be to not have a depot for MRO, but salvage high-value subsystems and install them in to the next vehicle,” says Wierzbanowski of the Gremlins programme. “It all comes down to the cost of the system versus its expected lifetime.”