Why the US Navy is thinking hard about smaller aircraft carriers

For a look at the biggest, grandest and arguably mightiest warship in history, search no further than the US Navy’s (USN’s) newest aircraft carrier, the USS Gerald R Ford. Displacing nearly 91,000t, longer than three football fields, technologically superlative and able to host more than 75 aircraft, this study in raw power is the ultimate supercarrier.

But alas, with cost overruns pushing the bill beyond $13 billion – construction began in 2005, delivery and commissioning took until 2017 and trials are still ongoing – the navy is worried that it is spending too much on a ship that is at risk of being sunk. Indeed, the whole concept of the supercarrier – the long arm of the USA’s military power – is getting the biggest rethink since the end of the Cold War. 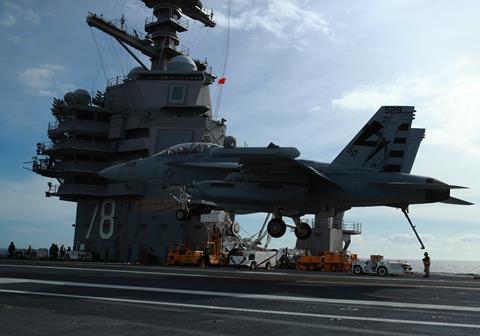 What is increasingly obvious is that such vessels are vulnerable to China’s anti-ship missiles, particularly the 810nm (1,500km)-reach of the DF-21D land-based ballistic missile. That is especially true because the USN’s combat aircraft, the Lockheed Martin F-35C Lightning II and Boeing F/A-18E/F Super Hornet, do not have enough range to keep aircraft carriers at a safe distance.

The Gerald R Ford is the lead ship in its class and displaces 90,700t, making it one of the largest warships ever constructed. It is equipped with technologies designed to launch 25% more sorties than its predecessors, the nuclear-powered Nimitz-class aircraft carriers.

Nonetheless, the service now openly says it might stop buying Ford-class carriers after a fourth ship is built. “I don’t know if we’re going to buy any more of that type,” acting secretary of the navy Thomas Modly told Defense and Aerospace Report on 3 March. “We’re certainly thinking about possible other classes. What are we going to learn on these four that’s going to inform what we do next? But we have some time now, we have up until 2026, 2027 before we have to make a really firm decision on what the next carrier is going to look like.”

On 9 March, Modly commissioned a “Blue-Ribbon Future Carrier 2030 Task Force” to conduct a six-month study to reimagine the future of the aircraft carrier and carrier-based naval aviation beyond 2030.

The Gerald R Ford, which can carry more than 75 aircraft, was designed to launch a volley of sorties early in a war. “The belief was that in a conflict with a great power, like China, the carriers would have to get aircraft airborne very quickly,” says Mark Cancian, senior adviser in the Center for Strategic and International Studies’ (CSIS) International Security Program.

The vessel uses several technologies to speed up aircraft launching, recovering and rearming: Electromagnetic Aircraft Launch System (EMALS), Advanced Arresting Gear (AAG), and Advanced Weapons Elevators. But those systems have been troublesome, setting back the deployment of the carrier until 2024; about six years behind schedule. Fixes for those problems, among other issues, have pushed up the ship’s cost by about 27%.

The USN points to the ship’s other improvements, however, including its A1B nuclear reactor which, combined with a new electrical distribution system, creates a 250% increase in electrical capacity.

The electrically-run EMALS and AAG use electromagnetism rather than steam power. The result is the ability to precisely launch and recover aircraft down to lightweight unmanned air vehicles (UAVs) – aircraft that are not durable enough for the rough ride that comes with conventional steam-driven systems.

Extra electricity could also be used to power futuristic defensive weapons. “The ship’s configuration and electrical generating plant are designed to accommodate new systems, including direct energy weapons, during its 50-year service life,” says the USN.

Science fiction weapons aside, delays and cost overruns – combined with new threats from anti-ship missiles – are helping the debate about the future of the aircraft carrier to pick up steam.

It is not a new debate, though, says Cancian. “This debate has been going on for arguably 70 years. Ever since the advent of the Soviets getting nuclear weapons, there have been arguments that in a great power conflict carriers would be vulnerable,” he says. “In the ’50s it was nuclear weapons. And then, into the ’60s it was anti-ship missiles. The Soviets always kept some missile ships near our carrier so that if there were conflict they would launch immediately and take out the carriers.”

Those threats aside, carriers are clearly useful for a variety of missions against lower-end threats including crisis response, humanitarian assistance and regional conflicts, says Cancian. The question is: what happens in a nuclear war or all-out conventional battle with a great power, such as China or Russia? “The problem with the debate is that it is irresolvable in peacetime,” he says.

The USN is not waiting to find out how its fleet of supercarriers would fare in an actual war. Instead, the service has been quietly studying its options. For instance, the USN commissioned a study by RAND Corporation to examine alternatives to the Ford class. A declassified version of the report was made public in 2017.

The USN is required by law to have no less than 11 operational aircraft carriers. Currently, those ships are all supercarriers. However, using guidance from a USN-led executive steering committee, the RAND report envisioned a new strategy where naval aircraft are dispersed over a number of smaller carriers. “Having to find multiple smaller targets rather than a single large one complicates enemy targeting, imposing expense and risk,” it says.

The concept is similar to the US Air Force’s Agile Combat Employment strategy, which aims to move the force away from operations on large, highly efficient air bases towards many expeditionary airstrips, spread across small islands in the Pacific Ocean.

The ship-size the USN has the most experience with, and appears to be leaning towards, is that of the US Marine Corps’ (USMC’s) amphibious assault ships – small aircraft carriers which also carry landing craft for shore invasions within their well decks. In 2016, the service experimented for the first time with a “Lightning Carrier” concept, where it packed USS America with a dozen short take-off and vertical landing (STOVL) F-35Bs.

The USS America cost about $3.3 billion to build – roughly 75% less than the navy’s newest offering. It only displaces about 41,000t, which makes it about half the target of its larger cousin, but also gives it less capacity. 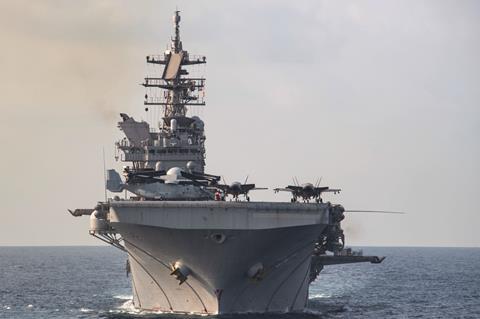 The RAND study hypothesises that if amphibious assault ships were built to be slightly larger and were to specialise in carrying aircraft they could fit 25 examples of the F-35B. The mini-carrier, dubbed CV LX by the think tank, would be able to carry out 50 to 55 strike aircraft sorties per day. A fleet of such ships would rely on dispersion and strength in numbers for survival.

“They won’t deliver the full range of capabilities, but they allow a great deal of flexibility,” says Nick Childs, senior fellow for naval forces and maritime security at the International Institute for Strategic Studies, referring to amphibious assault ships.

This is a concept of operations that the USN is getting practice with now.

“Because clearly the current US Navy carrier fleet is over-stretched today you are seeing occasionally a large amphib with a contingence of F-35s filling gaps,” says Childs. “We’ve seen that in and around the Persian Gulf, in the Strait of Hormuz [and] in the North Arabian Sea in the last couple of years.”

Amphibious assault ship-sized carriers have drawbacks though. For instance, they cannot carry the navy’s current airborne early warning asset, the Northrop Grumman E-2 Hawkeye, or its EA-18G Growler electronic attack aircraft. Because of the lack of a catapult launcher, only STOVL aircraft, such as the F-35B, can be used. This has the smallest combat radius of a Lightning II variant, at only 450nm.

The USMC had tried overcoming that limitation by developing a vertical take-off and landing UAV, called MUX, that could carry airborne early warning, electronic attack and a variety of other payloads. In March, it conceded that the project was too complex, and is going back the drawing board. 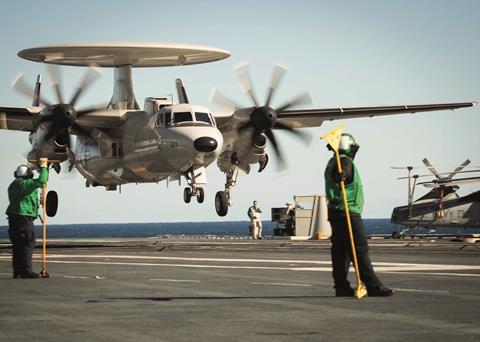 However, there is precedent for launching conventional fixed-wing aircraft from smaller carriers. The French nuclear-powered aircraft carrier Charles de Gaulle, which has a length of 262m (860ft), about the same as the CV LX proposed by RAND, uses a shorter catapult system to launch conventional aircraft. Those aircraft include the Dassault Rafale M fighter and E-2C.

The French navy vessel also has been known to host the USN’s Super Hornet; the cousin of the electronic attack-roled EA-18G.

In a US Congress-mandated study, the Center for Strategic Budgetary Assessments proposed in 2017 that amphibious assault ships could eventually be replaced by “purpose-built” 36,300t to 54,000t light carriers “with catapults and arresting gear”.

Whatever the USN chooses, the result will not be known until the conclusion of its Blue-Ribbon study six months from now.