Is simulator training really the best option? Why would being put through your paces in something that replicates the flying experience be more effective than training in the real thing? How can an artificial environment be preferable to taking to the skies and proving that you can complete a series of maneuvers in the same random conditions that you will encounter every day of your career?

Compare also the convenience and cost of training from a local airfield to travelling to a specialist training centre and the case for staying on the ground to learn to fly might seem less than compelling. But if it sounds counter-intuitive, it is one that Jack Tessmann, director of training at FlightSafety Textron Aviation Training in Wichita, is delighted to make. “You can do so many more things in a simulator that you cannot do in an airplane, because of the risk factor,” he says. “In a simulator, we can set it up for the pilot to experience a catastrophic engine failure that results in a fire just after take-off in blowing snow. If you are training in an aircraft, there is a point at which you have to say, that’s enough.” 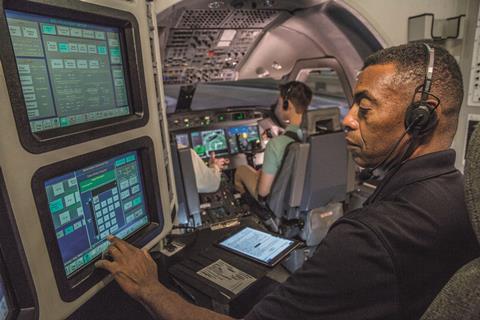 So much more can be tested in simulators than an aircraft

He adds: “There are things we can do in a simulator that you physically cannot do in an airplane, such as an engine hot start, which you cannot replicate without damaging the airplane. It means that, if that situation does occur in the real world, the pilot has seen it before, they know how to respond. It won’t be their first rodeo.”

The simulator helps the instructor focus on more than how the pilot handles the actual emergency, says Tessmann. “We can continue that scenario to a logical conclusion based on the decisions the pilot is taking. It’s a fully-evolved scenario, where they can see how their decision making influenced what happened.”

He concedes that some aspects of being responsible for a general aviation aircraft are better taught in the field, such as how to fuel, towing techniques, preflight external checks, and aspects of maintenance. However, Tessmann is adamant that when it comes to the actual flying, there is very little that cannot be learned more effectively and safer in a simulator.

That might not always have been the case. “There was a time back in the nineties, on phase one, two, and three devices, when simulation lacked the fidelity,” he admits. “But the quality of simulators has improved enormously. There are now hundreds of different procedures that can be perfected in a simulator first. Simulators can train for every eventuality.” 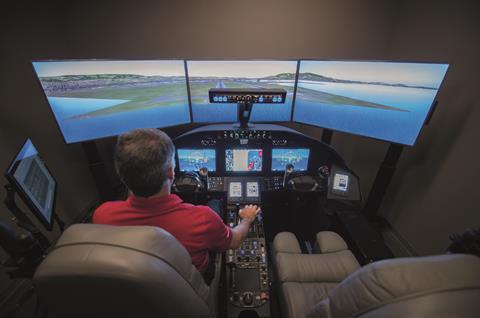 Hundreds of procedures can be perfected before taking to the skies

Being able to train to the limits without putting aircraft or pilot in jeopardy is key. “That quality of simulation means you can create every type of weather from broken clouds to patchy ground visibility, thunderstorms, windshear, and other visual hazards to simulate an approach in a wide range of conditions,” says Brian Moore, senior vice president of operations at FlightSafety International. “In a real airplane you’ve got to put yourself at risk.”

The cost advantage of airborne training can be a false economy too, argues Tessmann. “Some companies think they can save a bit of money by introducing that level of realism, and have ended up with an incident, which ends up being much more expensive, or, even worse, a serious accident,” he says.

There is also a “misconception” that simulator sessions are pricey. “There will tend to be a difference, but it’s not that big a delta, when you take into consideration all your fixed and variable costs,” he says. “You don’t have the travel and the lodging, but once you start looking at the value proposition, that 30 percent or so increase doesn’t equate to the added value of using a simulator.”

So how difficult is it to get that message across? “Large flight departments understand it, but with a new operator, there is the possibility of them coming into contact with someone who persuades them it’s better to train with the airplane,” says Tessmann, who credits bodies such as the Citation Jet Pilots Association for spreading the word about simulator instruction to rank and file owner flyers.

“It’s a process,” he says. “Many owner operators are entrepreneurs who have built their successful business by making their own decisions. They might fly with someone and confidently master take-offs and landings, but, when it comes to understanding the true operations of the airplane, there is much else to consider. People have come to us and said ‘I can’t believe there is so much I didn’t know.’”

Regulators tend to have minimum standards for awarding licences to fly an aircraft. “Where companies such as FlightSafety pick it up is in the detail, such as advanced avionics,” says Tessmann. “When you do one of our courses, 40 percent of the time is devoted to understanding these avionics. A typical Citation training course will teach one thousand new skillsets.”

Another advantage of opting for simulator training is the skill and experience of those teaching. “Typically in a flight school, instructors will train on multiple models, so they try to make it as generic as possible,” says Moore. “The problem is that waters down the specific operational aspects of the aircraft you are flying.”

All FlightSafety instructors are experts in the type they teach on, often remaining loyal for decades. “Sometimes that’s their only job,” says Moore. “If they do another aircraft, it will be a similar model. They won’t be a Citation instructor today and be teaching on a Learjet tomorrow. We think of them as teaching at a PhD level on that aircraft.”