Last year was a record for airliner orders. Will the next 12 months match up?

A new high water mark was set in 2005 for mainline airliner orders, beating the 16-year-old record of 1,631 aircraft ordered in 1989. This was a performance that surprised even those at the sharp end, including Airbus. So what does 2006 have in store – more of the same or a decline?

What is certain is that output will increase, beating the 660 aircraft delivered by Airbus and Boeing during 2005, probably by over 20% to 800 units. Airbus will again be the most prolific producer, but the gap looks set to close dramatically, with the European manufacturer delivering just over 400 aircraft and its US rival around 395.

Less clear is the order situation for 2006. With 2005 having turned out better than airframers expected, they are reluctant to predict too much for 2006. The consensus is that orders will revert to average. Airbus chief executive Gustav Humbert believes sales could return to the more normal level of “700-800” orders across the two manufacturers’ product lines.

The big change in 2005 was Boeing’s resurgence to head its rival in order market share for the first time in recent years. Although the final numbers were yet to be confirmed late last year, the US manufacturer seemed set to win the order battle for 2005 after strong sales of its 737, 777 and 787 models. 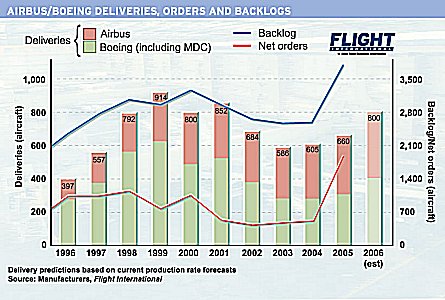 This year should see the debut of two significant new aircraft from Airbus and Boeing – the A380 and 777-200LR. The introduction of the latter by launch operator Pakistan International Airlines in the early part of the year will give the US manufacturer its counter to the ultra-long-haul Airbus A340-500. However, it is the latter that still holds the laurels for the longest scheduled airline service – the 16,600km (8,970nm) route between Singapore and New York.

While the -200LR’s debut is a formality, the A380’s service entry in 2006 is tentative. Airbus remains confident it will deliver the first two aircraft to launch operator Singapore Airlines (SIA) before the end of the year, but it must complete the flight-test and certification programme for the aircraft with no hitches to meet that schedule. Should it do so, there is no guarantee that SIA will be confident enough to fly fare-paying passengers in the small window before the year ends.

As it works to keep the A380 on track, Airbus faces another difficult task in 2006 – deciding what to do about the A340-500/600 family. The manufacturer is known to be proposing a major enhancement programme for the aircraft to customers, incorporating elements from its A350, such as weight-saving materials and with new Rolls-Royce Trent 1000-derived engines. If it can generate enough interest to secure deals, Airbus may decide to launch the aircraft during the year.

Boeing also faces a dilemma with the 787. It has already designed a stretch derivative – the 787-9 – but is coming under pressure from some potential customers (in particular Emirates) to develop an even larger version, the so called -10X. With Emirates expected to decide sooner rather than later between the 787 and A350, a decision on the 787-10X could be taken this year. Meanwhile, Airbus will reach the design-freeze milestone on the A350 programme during 2006, and is being encouraged by current and potential customers to wring as much performance as possible out of the new aircraft, so expect further revisions to a specification that is already impressive, given that it started life as a relatively simple A330 derivative. 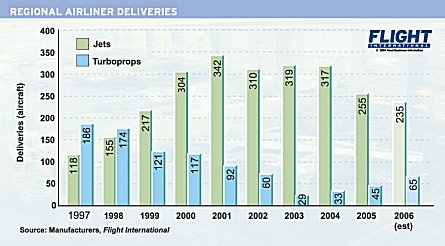 Meanwhile, a less dramatic, but nevertheless significant, derivative of an existing family is due to emerge from Seattle towards the end of the year with the first flight of the new 737-900ER. Two aircraft will be included in the five-month flight-test programme ahead of first deliveries to launch customer Lion Air in mid-2007.

Whether the 737 family, and for that matter the rival Airbus A320, will have an all-new competitor at the lower end of the size scale should also become clearer in 2006, when Bombardier decides whether to launch the CSeries family. This 110- to 135-seat airliner project has been under evaluation since mid-2004; Bombardier may have to “put up or shut up” in 2006 if it is to keep its reputation intact.

Bombardier is already feeling the squeeze in the regional market it once dominated, having decided to suspend production of 50-seat CRJs in 2006 as demand shifts towards larger regional jet types and turboprops, due to a combination of the saturation of 50-seat regional jets and escalating fuel prices. Bombardier’s 2005 deliveries fell by around 15% over the previous year, with the overall effect of pushing total regional jet output down by 20% as Embraer’s output remained flat at around 130 aircraft (excluding corporate/military variants). Last year’s regional jet delivery tally was at its lowest level for six years, with a further decline expected in 2006.

The year will see the completion of the quartet of Embraer E-Jet large regional jets, with the introduction of the last model, the E-195, by UK regional low-fare carrier Flybe in the third quarter.

As regional jet deliveries decline, the turboprop business has gone from bust to boom, with ATR and Bombardier recording triple-digit orders between them for the first time in almost a decade. This revival of the sector, which had almost flat-lined in the early 2000s, will begin to be reflected in output from 2006 with the number of deliveries set to rise dramatically over the next two years from a low of 30 in 2003.