For the US general aviation community – the largest in the world – there is just one issue on the agenda for 2006: user fees. The threat of direct charges for access to the US national airspace system has emerged before, only to recede, but this time may be different. 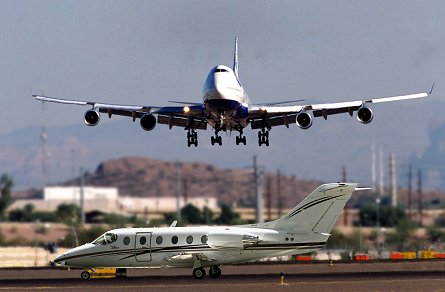 The GA industry believes a “perfect storm” is brewing between the struggling airlines’ demand to pay less of the cost of running the US air traffic control system and the Federal Aviation Administration’s desire for a more stable funding stream.

The storm is expected to come to a head in 2006 for two reasons. The FAA’s current four-year authorisation ends in September 2007, and reauthorisation legislation must be passed this year. The 10-year authority to collect taxes for the Airport and Airways Trust Fund expires at the same time. Some see this as a unique opportunity to revise the way the system is funded, and the FAA’s 2007 budget request, when presented in February, is expected to propose user fees.

“There is a growing inevitability of a user fee fight on Capitol Hill,” says National Business Aviation Association (NBAA) president Ed Bolen. “The airlines are growing increasingly vocal in their claim that we’re not paying our fair share into the Airport and Airway Trust Fund. This time things are different, and the situation is far more serious.”

The Trust Fund, which pays over 80% of the FAA’s bills, is supported by fuel taxes paid by all airspace users and ticket taxes and segment fees paid by commercial carriers. Previous battles were between legacy airlines wanting user fees and low-cost carriers defending ticket taxes. The latest drive for user fees has more widespread backing by airlines, and they “view us as their competition, claiming their first-class passengers have abandoned them for business aviation”, says Bolen.

The airlines, through the Air Transport Association (ATA), began making their case to Congress during 2005, arguing that they provide over 90% of the revenue for the Trust Fund, but account for only two-thirds of operations. The ATA says scheduled operations accounted for only 66% of instrument flight rules (IFR) operations in 2004, and argues that, to an air traffic controller, a Gulfstream IV business jet looks much like a Boeing 737 airliner.

Striving to avoid antagonising the politically powerful, 400,000-member Aircraft Owners and Pilots Association – and to divide and conquer opposition to user fees – the ATA is proposing that “personal aviation” operations under visual flight rules continue to pay for airspace access through fuel tax. Instead it is focusing on business aviation, and the NBAA claims the ATA wants a system where all aircraft pay the same fee regardless of size – from a single-engined turboprop to an Airbus A380 – contrary to the International Civil Aviation Organisation’s weight-and-distance guidelines, used by other countries that charge for airspace use.

But large business jets like Gulfstreams do not make up all of other third of operations, the NBAA says. While business jets account for 12.5% of IFR operations, turboprops and pistons – which make up the bulk of the US business aircraft fleet, the association argues – account for 7.2% and 11.2% of IFR operations, respectively. GA aircraft are also flown less intensively than airliners – annual turbine hours totalling a third those of the airlines, according to FAA figures. And, the NBAA contends, only around 10% of airports used by business aviation have towers, while turboprop and piston twins typically fly below the scheduled airlines and business jets above.

“There is no simpler and more accurate way to distinguish between heavy and light users of the system than to measure the amount of fuel burned – small aircraft use less fuel and pay lower taxes; large aircraft use more fuel and pay higher taxes,” Bolen told Congress last year. Meanwhile the rapidly growing and intensively flying fractional-ownership companies – and any air-taxi operators planning to fly the new breed of very light jets – pay ticket taxes and segment fees the same way the charter carriers do, says NBAA.

But the GA industry is bracing for a fight that seems inevitable this year and which – if lost – could have an on impact business aviation’s so-far robust recovery. The NBAA is trying to rally support from a customer base that is traditionally reluctant to make its voice heard. “Our industry is too large to remain silent,” says Bolen. “Our visibility and successes have made us a target. We must shape our own destiny.”