Forecasts 2006 Summary: The only way is up 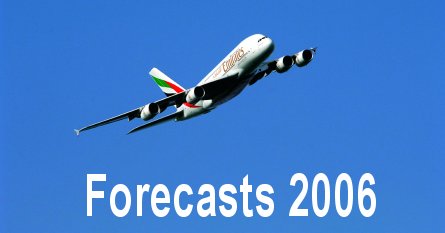 Back in January 2002, aerospace was descending into what threatened to be a long and painful malaise. Although our Forecasts coverline for the first issue of the year proclaimed “Bounce back!”, the shock of 9/11 on passenger confidence meant even the most optimistic realised a return to the good times of the late 1990s was going to be long and not necessarily guaranteed. Airlines – especially in the USA – were furloughing aircraft and crew; corporate aviation was in crisis and industry began laying off millions of employees as sales evaporated. Not even the boost to US defence from President Bush’s war on terror could shore up shrinking orderbooks.

Four years on, the recovery has been faster and stronger than almost anyone predicted, despite a series of further body blows including the Iraq war, terrorist outrages, SARS and soaring oil prices.

Although the US airline sector is still struggling to wriggle into profit, many corners of the industry – from very light jets to Middle Eastern airlines – are experiencing stellar growth.

From managing decline, the main challenge now facing aerospace is dealing with demand – from training pilots through meeting manufacturing deadlines to overcoming shortages of skilled engineers, the supply chain is struggling to deliver. Part of the problem is the old one of investment lag: if suppliers plough profits into buying equipment or taking on apprentices today, they will not feel the benefits for years. By that time, the cycle could have turned down.

The biggest question facing the industry is how long it will last. In recent times, aerospace has seen recessions roughly every 10 years. On that basis, the next one should be due by about 2010. The threat from international terror is forcing governments – including the USA – to question the need to invest billions in equipment designed for fighting conventional enemies. The 11 September attacks, SARS and avian flu and a rocketing oil price all show how exposed the industry can be to external, unpredictable events.

Maybe this time, however, things could be different. Unlike previous recoveries, Asia and the Middle East – rather than the mature markets of North America and Europe – are leading the charge in civil aviation.

Meanwhile, US airlines are finally being forced to restructure fundamentally, while low-cost operators in Europe, with a very different operating model, have ushered in an era of cut-price travel and forced “full-service” competitors to follow suit. So long as hindrances such as the poor flexibility of the supply chain to react to rising demand, and lack of capacity at airports and in the skies can be overcome, the assumption that bust will follow boom at the turn of the decade is by no means inevitable.

Click on the links below to read the forecasts.

Airframers
Last year was a record for airline orders.Will the next 12 months match up?

Safety
Self-regulation is the key to bringing nations with a poor safety record to standard.

Environment
Will the gamble on emissions trading pay off for aviation?

Defence: USA
Many US programmes face a year of turbulence and stagnant budgets

Defence: Rest of the World
A year of change beckons as aircraft retire and new types enter service

Mergers
Could the consolidation be on the cards for the industry's big players?Don't count it out