For a parent who will have little time with his offspring, Fred Reid is a positive fellow. The chef executive of Virgin America, Reid will have to leave the startup carrier in February 2008 under a government agreement, having only just seen the start-up take its first step.

Regulators at the Department of Transportation demanded his exit as a condition of granting Virgin its certificate to start flights in August. The carrier’s affiliation with Virgin Atlantic and the Virgin empire had drawn furious opposition from labour groups, who objected that Virgin founder Richard Branson’s interest would constitute foreign control of a US-flag carrier. Virgin America restructured ownership, and Reid agreed to leave, albeit reluctantly. 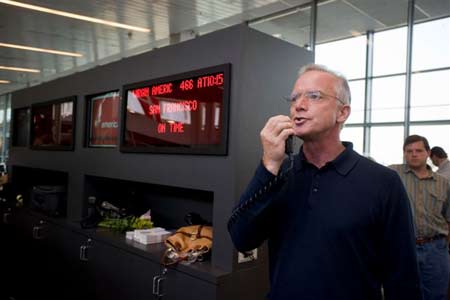 Now he has until February to leave the San Francisco-based carrier, and he jokes that February is his “sell-by date”. But Reid has a few goals to achieve before then, including getting the in-flight entertainment to work flawlessly. It’s one the features that Fred’s proudest of, and “getting the glitches out of RED before my sell-by date is one of my goals”. RED features seat-to-seat instant messaging, 18 channels of live satellite television, games, 25 pay-per-view films, moving maps that allow viewers to zoom in on details, right down to the street level, and a lot of music that can be downloaded. Charles Ogilvie, Virgin America’s in-flight entertainment guru, says that RED has had problems but crew members were learning to solve them. “We spent a lot of effort on things like having a classical music selection that went beyond the predictable stuff like Vivaldi’s Four Seasons.” Ogilvie says that live on-board internet starts next year some time.

Hip reputation
Reid explains that Virgin America stresses in-flight entertainment after seeing how JetBlue used its then-exclusive Live TV to build a reputation as hip. As a carrier with a large number of transcontinental routes, Virgin America had to “consider the guest experience”, he says. The hi-tech personality of the aircraft’s interior is vital to the brand, Reid says: “we are an airline that has the culture of new technology.”
Reid is candid in his admiration for JetBlue, and its influence on the new carrier’s development shows in a number of ways. Just as JetBlue built much of its selling point on its in-flight entertainment and the fact that every single set had free Live TV, Virgin has live TV – and more – at every seat, although it charges for films and the like. Similarly, JetBlue’s reliance on a strong home market was key to Virgin’s choice of a home base: New York, for JetBlue, was a strong origination and destination point, and Reid adds, “The Bay Area is either number one or two or three, depending in what year you’re talking about, in origin and destination among US markets. All you need is a quality product”.
Reid says the carrier will spend its first year or two building routes from San Francisco rather than developing a network. “We’ll go to the top 12 or 15 cities that people in San Francisco want to go; we don’t expect very many connecting passengers. We will be a San Francisco airline.” Reid says that even though the startup team considered other cities for its home base, including Boston and Washington DC, it chose San Francisco because “we were all just stunned that a place like SFO did not have a home-town airline. “The City on the Bay has an affluent population is a strong tourism draw and above all had a hip, vibrant culture that we also saw as great source for the kind of people we want.”

First routes
The first routes were cross county, between SFO and New York Kennedy, followed by Los Angeles to SFO and then in September SFO to Washington Dulles International Airport. The airline also flies to Los Angeles and just added service between SFO and Las Vegas, and is considering adding San Diego, California.
Reid says the single most important thing for Virgin “is making sure we can find the right kind of people. We are a different kind of airline because of our people. Our pilots, for instance, want a closer relationship with the customer, and that’s one reason why they dress informally and act informally. Pilots at other airlines say to us, ‘Hey, they don’t look like pilots,’ and we say back to them, ‘Thank you’.”
But Reid, a former number two at both Delta Air Lines and Lufthansa, won’t look back, except to say he remains saddened that he will have leave the hip new Virgin America. “You know,” he says, “I’ve just been so energised working with these smart people at Virgin.” And he has no intention of going stale after his sell-by date.