A French air force-led team has demonstrated the mid-flight handover of the command and control of a Mali-based Harfang unmanned air vehicle to the aircraft’s base in Cognac, France, during an hour-long demonstration on 17 June.

During the testing, a Harfang UAV – currently deployed in the Sahel region of Africa in support of France’s counter-insurgency Operation Serval – transferred control of the flight and the payload to its domestic base in Cognac and back again.

This flight is the first of its type and validates what the French defence ministry calls the “Reachback” or “Remote Split Operations [RSO]” concept. The flight was conducted by a team from the military Unmanned Aircraft Operational Trials Center (EHIC), plus personnel from the 1/33 “Belfort” UAV squadron and the Sahel-Saharan Band (BSS) UAV detachment. 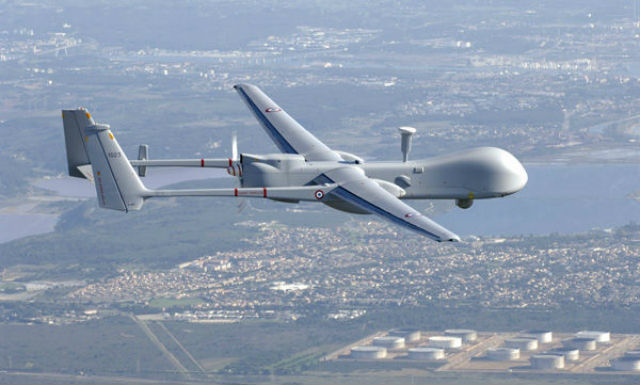 The Harfang is a medium-altitude, long-endurance UAV manufactured by Airbus Defence & Space and derived from the Israel Aerospace Industries Heron 1 system. It has been deployed to the Sahel region of Africa, which includes Mali, since January 2013.

The handover test “went smoothly” and was carried out to prove the possible transferral of the system’s operations in case of an emergency.

“It [the demonstration] makes it possible to have the ability to increase the supply of ISR [intelligence, surveillance and reconnaissance] in case of a surge in theatre, without having to leave the country,” the defence ministry says.

“Depending on the required mission bandwidth and the available potential, it could even be possible to control simultaneously two drones based in the BSS region, one from Cognac and another from the BSS.”

During the command and control handover test, “a robust and cyber-proof” command, control, communications, computers and intelligence link was used from the air force’s central hub, which is based in the National Air Operation Centre/Joint Forces Air Component. This provided the connection between the deployed detachment and France, and made it possible to safely carry out this experiment, according to the ministry.

“This promising new capacity must, however, lead to the development of new thinking on the notion of distance and its consequences, a phenomenon already faced by our allies,” the defence ministry continues. “In this context, the air force’s employment doctrine remains to deploy drone pilots closer to the action, so as to guarantee efficiency and responsiveness in responding to support requests.”

The Harfang was procured as an interim system and was first operational with the Belfort squadron in 2008. The air force announced in January that the system had flown 10,000h during 900 sorties in support of French operations in Afghanistan, Libya and Mali.

In the same month, the French air force deployed its new General Atomics Aeronautical Systems Reaper UAV to the region in support of the African operation, following its delivery in December 2013.

France’s Harfangs are due to remain in service until at least 2017, according to Airbus. In January, it was reported that a Moroccan purchase of three Harfang unmanned air systems via France had already been agreed, and additional aircraft could follow.