Small inputs to the airflow over a surface can produce large effects, says Saddoughi. An example is GE's on-demand vortex generator, comprising a piezoelectric-metal "springboard" that vibrates over a cavity, pushing out and sucking in flow and creating a pair of counter-rotating vortices. Activated when separation is detected to reattach flow over the wing, they create less drag than fixed VGs.

Another approach is synthetic jets produced by electromechanical "bellows" that ingest and eject air at high frequency and velocity to re-energise the airflow. Using synthetic jets, GE has demonstrated separation control at landing speed on a full-scale trailing-edge flap and further trails are planned, says Saddoughi.

Wake reduction was demonstrated in 2005, he says, when the first-ever active flow-control flight tests showed that six synthetic jets round the aft end of an inlet-mounted targeting pod on a Lockheed Martin F-16 significantly reduced vortex-induced vibration on the fighter's ventral fins.

While synthetic jets can be used up to transonic speeds, GE is looking at pulse-detonation actuators for supersonic flow control and fluidic jet vectoring, Saddougi says. These burn fuel in bypass air to produce high-pressure pulsating supersonic jets. 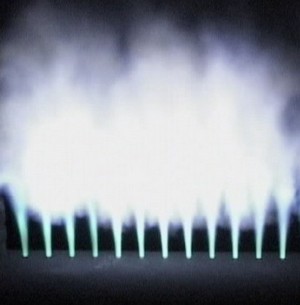 GE is also researching spark jet actuators that use high-voltage arcing between two electrodes to generate hot plasma in a cavity. Switching the spark on and off causes air in the cavity to expand and contract, producing a high-frequency, high-velocity synthetic jet, he says.

A development of this is cold plasma, in which dielectric barriers at the electrodes prevent arcing, but allow the air to break down into ions and electrons. Thin-film actuators applied to an aerofoil surface can generate "streamers" of cold plasma to increase flow velocity. GE is investigating using the technique on engine blades, but Saddougi says it requires development of a very high voltage pulsed power source.

A variation of the cold plasma technique is being investigated for use in lean-burn combustors to stabilise the flame and keep it lit as fuel input is reduced. Another potential use is to break down the fuel-air mix to make it burn more easily. This could find use in pulse-detonation engines, he says, reducing tube length and increasing firing frequency (Flight International, 18-24 September).