Rolls-Royce made a late change to the BR725 engine selected to power the G650, incorporating a new combustor to reduce emissions significantly over the BR710 powering the G550.

R-R says rig testing is under way, with the first full engine run scheduled for the second quarter. The BR725 is capable of producing up to 17,000lb, the manufacturer says.

The new engine features a larger (50in) fan with swept blades for increased bypass ratio (+4.6%), improved efficiency and lower noise. Specific fuel consumption is 3.5% lower than the BR710s, and noise is 4dB lower. 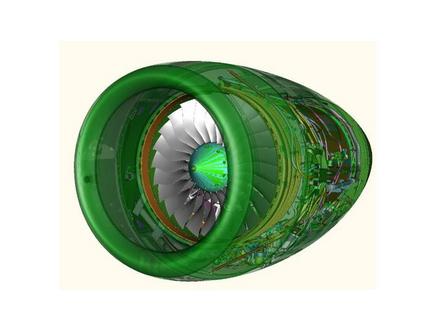 Other changes affect the high-pressure compressor, which has been aerodynamically optimized with elliptical leading edges on the blades. Stages 2 to 6 are now blisks – integrally bladed disks – to reduce weight.

Efficiency has also been improved by switching to a shrouded high-pressure turbine, with improved material and cooling in the two stages. A third low-pressure stage has been added to drive the larger fan.

The electronic engine control unit is based on Trent 1000 technology, the new accessory gearbox is lighter and the nacelle and thrust reverser are also new.

As in previous Gulfstreams all the fuel is in the wing – 44,200lb (20,050kg), 2,900lb more than in the G550. There are more sensors in the fuel quantity monitoring system, which has a redundant distributed architecture to improve reliability.