The drawings from patent filings dated in April and August emerge less than two months after a Gulfstream executive said the company is "very close" to overcoming the noise problem that prevents commercial supersonic aircraft from operating over populated areas.

They also reveal a configuration significantly evolved from Gulfstream drawings released in 2007 and 2009 for a concept aircraft identified in trademark applications as the "Whisper". In July, Gulfstream resubmitted an application for the Whisper trademark, describing its intended use for a supersonic aircraft featuring quite-boom technology.

Gulfstream also has been assigned an experimental aircraft designation by the US Air Force for an undisclosed supersonic aircraft called the X-54. 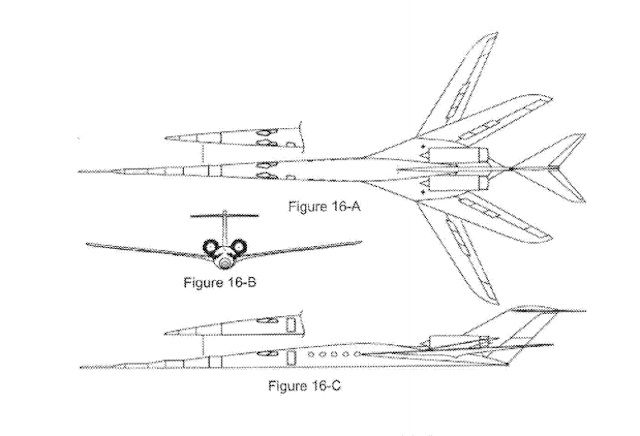 In the latest drawings, the telescoping nose - a legacy of the company's "Quiet Spike" experiments - appears to be thicker and is divided into six distinct sections at full extension.

A side-view drawing reveals a highly sloped fuselage that peaks slightly aft of the leading edge of a highly-swept wing. The top-view drawing shows the mid-fuselage mounted wing also sweeps forward by as much as roughly 30°. A cabin section is illustrated with five oval windows, or one fewer than the 13.7m (45.1ft) interior cabin length of the Gulfstream G450.

The drawings were part of Gulfstream's application for a patent describing the invention of a "relaxed isentropic inlet" for a supersonic inlet, which is intended to achieve supersonic compression in ways that do not increase certain kinds of inlet drag. Such an inlet also should reduce sonic boom noise without degrading engine performance, according to the application.