Universal Avionics believes that a lack of helicopter pilots in the future will mean operators will increasingly need to rely on solo pilots aided by automated technologies, such as helmets with augmented reality glasses, to handle workloads while flying missions.

Such needs will likely drive a boom in heads-up and wearable display sales, says the company. 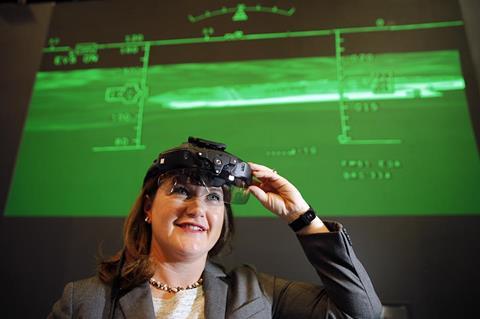 In response, the firm is pushing greater integration between its various avionics systems and its SkyLens Head Wearable Display, using software to automatically place flight information in front of the pilot’s eyes.

For example, the company combined its augmented reality helmet with its Interactive Flight Management System, a combination which allows pilots to see projected waypoints and other flight navigation information without having to look down at a helicopter’s flight instruments.

While helmet-mounted displays are nothing new, Universal Avionics says it wants to use its knowledge of military augmented reality displays, including experience gathered from its parent company Elbit Systems, to advance the technology and capture a large share of the market in the commercial helicopter sector.

The company has also pushed the technology via a research partnership with the Federal Aviation Administration that is aimed at developing new regulations for the technology.

Universal Avionics believes early adopters of such technology will be helicopter operators flying special missions, including emergency medical services, law enforcement, customs and border patrol, firefighting and search and rescue. Helicopters that fly in degraded visual environments such as at dusk, at night, in poor weather or in smoky conditions will likely be at the front of the pack.

Golan believes helicopter operators will lead adoption of heads-up displays because the piloting demands of rotorcraft are so much more rigorous than fixed-wing aircraft.